Paget's disease is poorly tolerated by patients. In addition, this disease is dangerous multiple complications. More information about this you will learn from this article.


Although there is evidence that the datadisease people suffer from prehistoric times, it was not known until the XIX century. When James Paget first described it and called osteitis deformans, considering that the basis of the disease is a chronic inflammation of bone tissue.

When Paget's disease is amplifiedpathological bone restructuring, which is characterized by alternating change processes resorption by osteoclasts and its tissue neoplasms. This process leads to the formation of disorganized mosaic structure of bone tissue with areas of fine-mesh structure. Typically, there is a bone marrow fibrosis.

Many researchers have suggested that the diseasePaget's is caused by a viral infection, but this theory yet to be proved. Previously, there were attempts to establish a link between the presence of a dog in the house, and Paget's disease, although the virus antigen that causes distemper in dogs, was found in only half of patients. Subsequently, this hypothesis was rejected.

Paget's disease predominantly affectswhite-skinned population of North European origin. This disease is almost does not occur in the Far East, India, Africa and the Middle East. In the US it is more common in the north than in the south. Men get sick more often than women (3: 2).

Paget's disease of the patient relativesIt found 7 times more frequently than in the control group. The risk of developing the disease is further enhanced if the relative disease manifested itself at an early age and it is difficult runs.


The most common manifestation of Paget's disease ispain (80%). The second most frequent symptom of the disease - pain in the joints, usually in the knees, hips or spine. Characterized by soft tissue hyperthermia over the affected areas of bone. In advanced cases develop bone deformities, including thickening of the skull bones and curvature of the arcuate leg bones. There is a tendency to pathological (spontaneous) fractures occur most often fractures of the femoral, tibial, humeral bone and forearm.

Changes with Paget's disease can develop inone or more bones of the skeleton (called monoossalnaya poliossalnaya and shape), respectively 20% and 80% of cases, this lesion can touch any bone. The most frequent localization process in the form of monoossalnoy - tibial and iliac bone. In general, the most commonly affected (in descending order) the pelvis, lumbar spine, femur, thoracic spine, pelvis, skull, tibia, and humerus.


The group of Paget's disease of bone complications include: 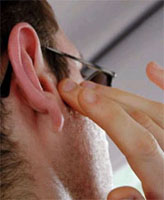 Neurological complications of Paget's disease include:

The group of vascular complications include:

On the part of the heart can be such complications:

Complications of Paget's disease can also be the development of these tumors: