These small flat lithium batteries can be found in every home. They are extremely popular and easy to use, but at the same time pose a mortal danger to small children.

These little round, flat, resemblingcoins or buttons lithium batteries, can be found in every home. They operate the scales, clocks, calculators and remote controls, they come to life thanks to teddy bears, hamsters, dolls and other toys. They are extremely useful and popular, but not every one of us is the danger fraught with these shiny things for children.

However, the increase in the number of accidents associated with the ingestion of batteries younger children, is of extreme concern not only parents, but also at the state level. Rospotrebnadzor has once again attracted the attention of parents to the grave danger posed to children batteries button cell.

Child exploring the world around him, using allanalyzers, which he bestowed nature. Tiny enough to see objects, it is important to touch them and be sure to taste. So in the process of learning in the mouth crumbs are sometimes very dangerous, and even deadly objects such as pins, paper clips, tablets, buttons, metal magnetic balls, and finally the tiny shiny lithium batteries. 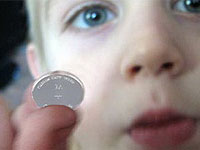 Not so long ago caused a major stir historya small two-year girl who was almost killed unfortunate "tablet". It all started with that little girl in the game quietly for Mom shoved into his mouth and swallowed a tiny battery. Flat metal contraption is stuck to the wall of the esophagus, was rapidly oxidized under the influence of biological fluids and burn holes in the internal organs.

At first, the girl felt quitefine. The child's mother cringed when her restless daughter subsided, became lethargic and refused to eat, vomiting, and opened all forced to sound the alarm. Arrived paramedic teams "Ambulance" examined the baby and reassured the agitated mama: they say, nothing serious, the girl SARS and angina, need a warm drink, rinse and antibiotics. Parents began to intensively treat the daughter, but despite their efforts, the girl was not recovered. The child's condition did not improve, but on the contrary, it became increasingly difficult. In the baby he lost his voice in his throat appeared suspicious scream. Again, the child visited a pediatrician, exactly as the doctors of the district hospital, where to go in the hope of help concerned parents, assured that nothing terrible happens, there is the usual course of SARS. Later action commission of doctors are regarded as criminal negligence against them was a criminal case, but the question now is not about that, and about the child's condition.
The story of the sequel

When she became very ill, coughing and vomitingintensified, she was taken to the regional hospital. Further events developed rapidly: X-rays, prolonged heavy surgery, resuscitation ... During his stay in the child's body, but rather just some 8 days, the oxide battery managed to make a hole in the esophagus and trachea, nearly sending the child to the light. Thanks to the skill of surgeons and intensive care specialists coordinated work and the surgical department, the girl was still alive. But how much more it will have to endure? In front of numerous reconstructive surgeries that have the ability to return the baby to breathe normally and take meals.

By the way, tablet batteries are dangerous not only to thosethat they can be swallowed. Particularly nimble kids have time to quietly bury their parents in the nasal passage, the ear. In this case, the effect will be manifested differently batteries, due to mechanical and chemical stimulation of tissue will develop otitis or rhinitis, inhaled foreign body may develop asphyxia.

How to protect children from the dangers? 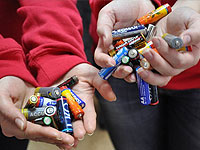 It is difficult to blame the mother of a little girl of negligence, not all situations in a child's life can be provided, but is obliged to be vigilant every parent.