Dreaming of a child, the parents, are his myself beautiful, intelligent,
talented and, of course, healthy. ... But, unfortunately, many
hereditary and congenital diseases may hinder the implementation of their
hopes. And medicine is not able to prevent this, as not always
can help improve the situation.

Intrigue phenylketonuria is that in the first months of life
child notice any of its manifestations is impossible. Only in
age 2-6 months baby becomes lethargic, he disappears interest
the outside may appear anxiety, vomiting, muscle violation
tone (often its decline), convulsions, eczematous skin changes.

In the second half of life is determined and the lag in development of the child.
Children no longer learn the mother, do not fix your eyes on, not things
respond to colorful toys. If untreated, mental
retardation usually reaches a deep extent. physical
the development of such children, as compared to the mental, disturbed to a lesser
degree. The head of them may be a bit smaller than normal, and later
teething. Most previously overgrown fontanelle.
These children later begin to roll over, sit and walk.
There are such children, wide apart, knees bent and hip
joints, legs, shoulders and lowered head. they walk, swaying,
small steps. Because of the increased muscle tone, they often sit,
cross-legged.

Given the fact that in order to prevent serious mental
violations of the baby is necessary as much as possible early treatment for
phenylketonuria diagnosis of neonatal solid formulation used
screening. It is a massive laboratory test samples
neonatal blood. If the phenylalanine content in them exceeds
norm, baby sent to the medical and genetic counseling for
confirm the diagnosis. Furthermore, for the detection of phenylketonuria
phenylalanine derivatives used in the determination of urine. 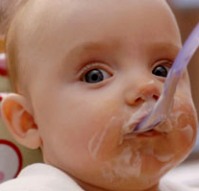 Treatment
phenylketonuria reduced, generally to diet therapy. Since
Confirmation of the diagnosis of phenylketonuria introduced drastic diet
restriction of phenylalanine content. Because This amino acid in a large
amount contained in the protein are excluded from the diet all protein
products of animal origin. This meat, milk, fish, mushrooms ... On
initial treatment kids get food, which fully
no phenylalanine. Since long, and the complete exclusion of food
phenylalanine could lead to the disintegration of endogenous (own) protein
and the depletion of the child. Because protein requirement is compensated with
aid of protein hydrolysates or amino acid mixtures.

Many mothers worry that their child without the mother's milk will
vulnerable to disease. That's what they think about doctors. because of
genetically determined deficiency of a particular enzyme at an amino acid
called phenylalanine in the body of the child turns into an extremely
toxic to the brain substance. Disclaimer appointed
dietetics or smudged can follow her in a few months
lead to serious and irreversible changes in the intelligence of the baby!
You must try as much as possible to strictly follow the assigned diet.
Of course, the amount of breast milk in the baby's diet can thus
to be negligible, but does not have to choose: very much serious
there are consequences in case of failure of artificial feeding
special mixtures hydrolyzate.

When the baby is a little older, and after
the concentration of phenylalanine in the blood drop to normal, start slowly
to introduce products of animal origin. The diet consists of baby
vegetables, fruits, fats, carbohydrate products, with strict regard
content of phenylalanine. It is necessary to ensure the delivery of the
amino acids in the body in amounts sufficient for normal
growth and development, but do not contribute to its accumulation in tissues.

Currently available are many dietary products and mixtures,
partially or totally deprived of phenylalanine. Such a strict diet
It must be maintained for at least five years. At older ages,
It decreases the sensitivity of the nervous system to the damaging action
phenylalanine and its breakdown products, so that after 12-14 years, children
may move to a normal diet. Medical treatment for
PKU is syndromic nature and involves the use of
anticonvulsants, nootropics (drugs that improve
mental activity), antidepressants and others. In addition, this
kids necessarily prescribe courses of massage and physical therapy,
carried with them developing classes.