Today as never before talking loudly aboutHealth automation. Sooner or later, this is the automation is implemented everywhere, and then ... And what exactly, then? The bureaucracy in medicine would not? - His thoughts on this subject is divided author of this article.


A sketch of the life of the Russian doctor 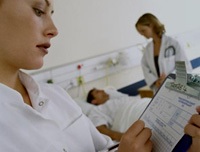 If you ever get sick or your child - student, try to read up to the end of the next strange text.

"Every class teacher at each visitschool each student fills Talon school attendance (Form 025-10 / y) as follows: name, surname, patronymic, date of birth, medical insurance policy, place of registration, place of actual residence, social status, benefits category, the date of the school visit, each theme lesson, complete topic or lasts received the mark, the signature of the teacher, student signature. Coupons are filled, along with the class log and must conform to it. They give up on a daily basis in the Board of Education. The number of coupons accounted for in the financing of schools. Improper filling and duplicate coupons entails penalties.
Filling the stamp does not exempt from the obligation to teachers qualified to teach their subjects. "

Phantasmagoria? Of course. But replace the "school" to "clinic", "teacher" to "GP", "student" to "patient" - and you will get even a simplified description of the true form of 025-10 / y - Talon ambulatory patient.

Overall phrase that a doctor is overloaded routinework - nothing. To understand the situation of terror, it is necessary to see this form. It is, of course, not the only one. But the most expressive way of example nonsense and disrespect to the doctor, the patient and the law.

Nonsense - because it representsrepetition of history, because it does not stimulate an effective treatment, but some patients walk to the doctor. Disrespect to the patient and to the law - because the personal data of the citizen, including what is called medical secret, repeatedly replicated and passed into the hands of various intermediaries that are not related to patient treatment. Respect to the doctor what to say - absurd work on rules that can not be met, petty tyrants commit groveling in order to realize their insignificance.


During the January holidays I have fulfilled the promise: Armagh physician clinics most of the lines of this creation is filled in automatically. Left is for manual entry field "medical examination", "ITU" and "health services" - do not know what to make. I recognize that this wisdom - and automate them. Just who and what he would do with such information? What is the benefit?

But if the stamps are administered, then it is someonenecessary? So it is necessary to appear at least one error in each ticket? What for? Just to keep the doctor in awe before the authorities under penalty ruble unknown reason (not for how treated, that's for sure, because he is not the supervisor knows how to treat).

How many people and organizations are employed in thatproduce stamps and other forms, distribute them, and then collect, verify, are counted! And still do for them of the calculation computer programs, implementing programs on the ground, learn to use them. And more control on the ground (in medicine supervisors may not understand their business - form). And even summoned to the meeting of chief physicians, their assistants and statisticians - teach them to work properly. Not with patients - with the forms.

And where is the result? Where the use of at least from the coupons? For a hierarchical ladder coupons treatment has prompted at least one person on useful thoughts on health improvement? I want to see this man! And there MIATS in each province - medical information-analytical center. Who uses his analytical products? Where's she? And there TFOMS - Regional Health Insurance Fund. And other centers and foundations. For its existence, require the "form" of the doctor and, presumably, are working on it. Take yes throw at least one, most meaningless document that prevents the doctor to work - so sensitive to touch many. No, if he's not, it will develop and complement. Create, invent, try - to doctors and patients. Foolovites remember, not knowing how to police itself, decided Tyapa heads. But his. Now bungling improved.

Now count up, what to leave money and creativeenergy in the implementation of the "Health" National Project. will implement it exactly the structure, the best recommendation which just serves as a current recording and reporting orgy. No wonder that already ready projects - is simply us. All documents are supposed to "improve" (some crazy replaced by others). And here priplesti informatics, computerization, automation. It priplesti, join, add. It would seem that automation should be to exclude all records. Leave one primary and natural - an electronic medical record. Doctor reflects everything in it. Hence, the one to whom it is necessary to let everything out and receives. Himself. Without touching doctor. It turns out that is not so. Automation - in itself, a "form" of the doctor - on their own. He will not get anywhere - will fill them and responsible for them. And it will be a lot of work all those who did not heal and does not know what it is. their unemployment rate is not threatened.

Do not believe me? Read the project "National Information System of personified accounting of medical assistance to the citizens." Believe it or not, everything is ready: specific plans for 2009-2011 and in them already so well regarded all that pleasure to: and 13.939 billion rubles, and 13,163 automated medical institutions, and the standard software and hardware complex (where. he - just a typical - appeared), and, of course, a new federal data center (FTSOD) in addition to the 86 MIATsam, and new-new forms (including not only the "Coupon of ambulatory patient", but also "Talon services rendered? "," invoice ", registers, and so on. and so on.). And what predictions! What are the "quality services"! What is the gain in finance! All too accurately counted! That's only with the final performance of health care - clinical and demographic - ashamed. And not talking about them if the National initiators of the project a year ago?

Who comes up with forms and information programsin health care? How justified the need for them? Who calculates their consequences? Why health care is organized and reorganized without doctors and major medical? With complete disregard for their opinion? Who rules the roost? Especially now that in health the money went?

Notice how the transformed systemcontrol. It was as follows: the doctor wrote the history of the disease, the supervisor checked them. Now Controllers primary document was not comfortable: read it difficult to delve into it - it is necessary to know the medicine. From doctors - for the convenience of controllers - have demanded the filling of secondary documents. The very same information that he had once he brought into the primary document - history. At the same time (due to the same doctors) received an additional "effect": any rewriting involves new bugs and errors - bread supervisor.

Further more. Secondary documents are well formalized. The treatment can instruct computers. But the computer is capable of infinitely more than the Controller. Hence, secondary forms can enrich, to complicate, to multiply. Computers handle. However, to complete these forms, too, should be enriched, but it in fact and there are doctors. A computer can be moved closer to him - in hospitals. Let entering secondary documents carry themselves. But how much will be revealed errors! And, above all, it is possible to report on the automation of medical institution. Progress!

So distorted idea of ​​automation in medicine. While doctors only in isolated cases, timidly groping and trying to move to electronic medical records, hoping to improve the conditions of their work, officials use computerization totally, not knowing what they are doing.

Two powerful new factors begin to affectmedical practice: The Russian ruble and Automation. These forces must be applied to the points that stimulate medical and organizational thought. Then there will be a considerable sense. But they are working to bypass the mind, bypassing the medical professionals. They hold in their hands and start up in business on their own understanding officials and financiers.