Who are the feminists

Who are the feminists? Whence originated the idea of ​​feminism? The answers to these questions can be found in the article.

Feminists. Who are they?

When feminists remember what the first association? Female,
which lacks a good guy ...? Fat, ugly, evil
man-hater? Or not even a woman, but ... something, "it", that
completely abandoned its nature?

So, before
hang tags, let's get as much as in the problem. So who
such feminists and where this whole story?

Evolutionary developed so that the kind of Homo Sapiens (ie. E. We are with you,
dear brothers and sisters) is divided into two sexes - males and females
(This is called sexual dimorphism). This is what determines the habitual
Human appearance (for all the obvious external differences between men and
woman), his behavior (hormones, will not escape from them), physical
strength and endurance - ie those indicators which are directly dependent on
the body of our humble physical shell.

Good or bad - to argue science fiction, and we have to live in the world,
where all mammals have two sexes, but only man evolved
in a rational creature. As a result of millions of years of change became Homo
Sapiens, man separated from the natural world so that created his
own. Which, respectively, to change and improve,
people - too. The man is now not only the most perfect animal, crown
creation and part of the ecosystem, he has long outgrown tempered nature
opportunities, rise above the physiology and trampled instincts. Homo
Sapiens, first of all, it is - a person, a unique and free. And
Who, tell me, please, turn the language to call Mozart male or
Joan of Arc - a female? In human society, the concept of sex as
together certain biological characteristics, added the concept of gender - socio-cultural gender, aggregate social and personal qualities.
So, in modern democratic world is not important sex and gender.

This means that there is no "male" or "female" occupations, and there are classes,
corresponding to a specific person. That is, roughly speaking, a strong, but
stupid woman may well dig out coal in the mine. A clever but weak
a man capable of great deal with embroidery. They are absolutely equal
This choice depends on the abilities and desires, not from sexual
authorities. A man and a woman - peer supporters, and not the parties,
oppressing each other.

But not evolutionary, and historically, so that women do
were oppressed (and do not need to appeal to
matriarchy, it's just a clever theory). One can argue about
The premise of this discrimination, the reasons which caused it, but the fact
Women's oppression is obvious. Think about it, when women were granted the right
vote? When - the right of inheritance? When the women were allowed (that
thank you!) to study in the universities? Why was the decision of women to wear
pants and smoking a cigar caused a rapid condemnation?

From the history of feminism

It all started in America during the war for independence. first
female fighter for equality is considered Abigail Smith Adams
(1744-1818), who became known for the phrase: "We will not
obey the laws, to adopt which we did not participate, and the authorities,
which does not represent our interests "(1776).

In Europe, the way of the fighters for equal rights was more thorny. For example, in
France published a magazine about women in front of the French Revolution
Rights, the French created a variety of public organizations,
who demanded for women and civil rights have been actively
participation in the political struggle. Success, they have not reached, and one of
ideological inspiration movement, Olympe de Gouges (author of the Declaration of Rights
woman and citizen, where the requirement of social and contained
political equality, founder of "Women's Society -
revolutionary of Republican ") was executed for his activities. In 1795
France, the women forbidden to appear in public places and
political meetings, and in 1804 Emperor Napoleon issued a decree,
declares that a woman has no civil rights and is
under the care of a man. 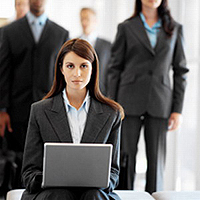 In England, the demand for civil equality of women was first
put forward by Mary Wollstonecraft in the book "Making Sense of the Rights of Woman" (1792).

But these were only the first signs that made the society think
and listen to their ideas. But, in fact, they are to founder
the so-called first wave of feminism (XIX - first half XX), when
a struggle for legal equality of the sexes.

The organized movement for equality began in 1848, in the US,
New York, in the town of Seneca Falls, where the congress was first held
women's rights under the slogan "All men and women are created
equal. " In 1869, two female public were created
organizations, united in 1890 to the National American
Association for women's suffrage. Due to its activity
members in a number of US states women were admitted to
voting.

In Europe, at the same time, women's suffrage gained momentum (from the English suffrage. -
the right to vote), ie the struggle for women's right to vote.
Society is very skeptical of suffragettes - they could
appear at social events without accompanying men allowed themselves
unacceptable dress (eg, pants or jacket), smoking could
to kill a man, and - oh, horror! - Expressed their opinions. Gradually
Suffragettes formed attitude as a woman of vulgar, dirty,
absolutely indecent and ... free. Men despised and feared them, and
ladies - also despised and envied .... The authorities did not support the views of
and undertakings suffragettes, they periodically arrested and sentenced to
various terms of imprisonment. One of the organizers of the movement for women's
the right to vote, was Emmeline Penhёrst, which formed in 1868
Organization in protection of social and political rights of women,
uniting for the year 5000 members. Under the pressure of this
association English Parliament passed a series of laws aimed at
advancement of women, and gave them the right to vote in local elections
(1894). At the same time, and there is the term "feminism" (from Latin femina -. A woman), the first time it was used by Alice Rossi in 1895.

From the middle of the XX century begins the second wave - the struggle for real equality of men and women. In the late 70-ies. movement gained
mass character, manifested in the mass actions in the creation of a number of
organizations and a number of small groups, without the informal nature
leader and theoretical strategies in the traditional sense.

Among
the most popular trends are the following: 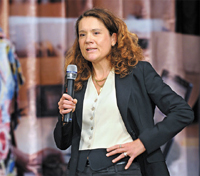 Feminism equality - Founded by Simone de Beauvoir,
wife of Jean-Paul Sartre, the ideology is described in her book "The Second Sex".
The idea is that all human beings are equal by nature and sex
differences - are insignificant and are not considered. By the way, Simon has made a
and the right of women not only to vote but also the right to enter into power
structure.

Situational feminism (Founder - Chiyli Benhabib) proposed to consider first of all the situation, and only on the basis of it, to make any conclusions.

The feminists of the second wave have achieved a lot, our world without them would have been quite different. And it is unlikely he would have been better. there are active debates about the third wave. Someone recognizes it, and
someone - no. One thing is clear: in the XXI century to the feminists joined
men. And no matter what spiteful critics gossiped, they are quite normal
sexual orientation.

And by the way, the movement for women's rights has never been exclusively
Women's: Plato recommended to render on the merits, rather than on
gender, and one of the forerunners of feminism-works - "On
greatness and superiority of the female "- was written by philosopher
Heinrich Cornelius Agrippa in 1529. In 1869, John Stuart Mill
He published his work "The subordination of women", which stated that
"Legislative support for the subordination of one sex to another is bad ... and ...
It is one of the main obstacles to universal
improvement. "

Of course, it is too early to talk about equality between men and women. All available
Statistics careers and salaries, domestic violence and sexual
harassment. No one was surprised woman - caring mother in the morning,
Lady-boss day, evening chef, passionate mistress at night and live
People with all of this. And feminism women need at least that,
just to survive in such conditions. A claim that feminists
hate men, at least, stupid. Women have long been a ...
married to them, whom they had children, conduct home, equip life, build
his career. There is no stupid hatred. Women, as well as two hundred years
back, want rights, freedom, respect and gratitude.