Home>Pediatrics>Causes of pyelonephritis in children

Causes of pyelonephritis in children

Causes of pyelonephritis in children 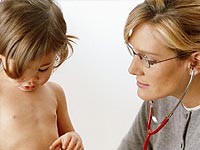 At the beginning of pyelonephritis in children, the causes of whichat an early age can be either congenital or acquired, indicates a number of signs and symptoms. Kids and teenagers susceptible to a greater extent than adults, and, in girls the inflammatory process at an early age is more common than in boys. Today, physicians, pediatricians and urologists note increased incidence of microbial-inflammatory disease in newborns and infants. Among the likely occurrence of the disease in the send point decrease in immunity, which is especially pronounced among the three age groups:

The overall decline in children's resiliencethe body is still there, and because treatment with antibiotics has become global, it affected the weakening of the immune system of an entire generation. Another important factor is the absence of urine toddlers antimicrobial substances known that babies up to 5 years is not able to completely empty the bladder, leading to stagnation and urine, respectively, to the growth of bacteria. In the older age noted getting an infection from the mucous membrane of genitals through the lower urinary tract in the right kidney. Do not forget about the foci of infection, long present in the child's body: caries, tonsillitis, sinusitis, etc. Sometimes inflammation of the renal parenchyma may be a manifestation of intrauterine infection.. A weighty argument in the event of illness is E. coli, inhabiting the perianal area, getting in the genitourinary system while cleaning the little girls, she also provokes inflammation.

How not to miss the symptoms of pyelonephritis in children? 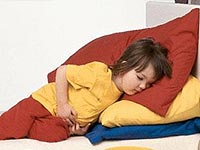 Depending on the affected area are distinguishedright-sided and left-sided, acute and chronic pyelonephritis in children. Symptoms of inflammation are manifested by pain in the abdomen and lower back, fever, vomiting, refusal of food, violation of water-salt metabolism. Teenagers complain of headaches, lethargy and general weakness, nausea, frequent urination, painful feeling they describe a change in body position, due to the slopes, stooping, and even cough. In severe disease disturbed renal excretory function, the ultimate manifestation of the inflammatory process is toxic shock. Such a state, depending on the duration and severity of a developing pattern can lead to kidney failure. Attention should be paid to the parents of the fact that sometimes the onset of the disease can go unnoticed that, unfortunately, does not simplify the picture, and leads to the development of severe complications. Caring mother will definitely notice a change child health, a forced position of the body in the form of scoliosis, pulling leg on the affected side - all this will serve as a signal to an urgent appeal to the pediatrician or pediatric urologist. Visit a specialist and necessary laboratory tests, including blood and urine tests, allow to conclude that the change in state of the kidneys and their function.

The secondary pyelonephritis in children - a zone of increased attention

Diagnosis is particularly difficult to put in infants andKids are much easier to question the case with teenagers, capable of at least schematically to present his status and experience. The main diagnostic base - is the characteristic changes in the general analysis of urine and typical clinical picture of the disease. Ultrasound examination of the urinary system helps to clarify the inherent anatomical pathology and the presence of anomalies in connection with the possible development of a secondary pyelonephritis in children, which is especially important when choosing a treatment strategy. It is known that the primary variant of the disease develops most often in healthy children when there is no basis for the development of urinary stasis. Certain hereditary and acquired diseases and defects, such as violation of the structure of the bladder, ureters, polycystic kidney disease, hydronephrosis in particular against the background of chronic tonsillitis, infections of the genital and urinary organs, multiple cavities may be starting mechanism in the launch of a secondary inflammatory renal disease.