Home>Proctology>Methods of diagnosis and treatment of abscess

Methods of diagnosis and treatment of abscess

Diagnosis abscess does not cause problems,doubts arise only in determining the internal opening. To this end, the abscess cavity enter a colorant. Treatment of acute abscess surgery alone, in the course of radical surgery reveal an abscess and remove the pus.

Methods for the diagnosis of acute abscess

To accurately identify the internal openingabscess apply it with the introduction of a puncture in the abscess cavity vital dye (better with hydrogen peroxide), the spot is determined by a small gauze cotton swab, carefully introduced at a time into the rectum on the wall opposite the abscess. It is enough to gently puncture (open) abscess, the evacuation of the pus, and without removing the needle, to enter into the cavity of the abscess paint (not forcing, not to remove inflamed tissue and does not generate false passage). Determination of the internal opening of the abscess is necessary, because in any case - whether or not it will be sanitized - you need to know exactly the location, so that later, if a fistula is formed, it is easier to perform a radical elective surgery. 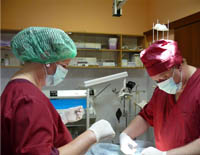 Patients with primary acute paraproctitis underwayabscess at the reception gets relatively little abscess usually reveal (punctured his front wall) in the clinic, or abscess opened spontaneously after the traditional home treatment - warm baths, compresses ihtiola or ointment Vishnevsky. In such cases, the external examination is visible small purulent wound near the anus, and at manual research is almost always possible to establish the localization of the internal opening.

When spontaneous or surgicalautopsy abscess untreated inner hole abscess radical cure does not occur, and therefore in acute paraproctitis (including the spontaneous opening of the abscess) for curative intervention under anesthesia.

The decision on the application of aradical surgery for acute paraproctitis should only be taken by a qualified proctologist and admission of such patients in general surgical hospital should simply wide open and drain the abscess in the perineum, and warn the patient about the possible recurrence of an abscess or fistula formation rectal. If this happens, the patient should be referred for elective surgery in proctology department.

After opening the abscess is better later inroutinely in the clinic to perform competently proctologic surgery for complex fistula pararectal than trying by any means to operate simultaneously radically acute abscess, without thinking about the future function of the obturator device that can be broken.