The word "phobia" is not the only useslazy. Such a diagnosis is currently even those who are very rough idea of ​​what it is. In our time, any fear is called this short word. And few people realize that this phobia turns life into a nightmare.

Fashionable now the word "phobia" was formed byGreek phobos, which means - the fear, the fear. But not every fear is a phobia. You can be afraid of anything - the darkness, storms, mice, but to live with it calmly and happily. About Phobias can only talk when fear dominates human life, interferes with its normal existence. 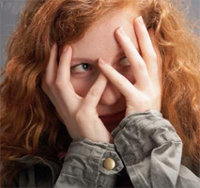 Psychiatric Dictionary defines phobia (orobsessive fears) as an intense and irresistible fear, the female patient, in spite of the understanding of its meaninglessness. This phobia is a type of neurosis and makes human life a living hell.

Here is an example, perhaps a few simple,but it allows to demonstrate the difference between a normal fear of phobias. Thus, a person is afraid of, for example, dark. But if he can without any hesitation to enter the dark room, walk in poorly lit street and go to sleep without the lights on, neither of which the disease is out of the question.

About Phobias can be able to talk when fearsubjugates human life. That is afraid of darkness would not come out in the evening, I will never sit in the shadows, and if he has to go to the room where the dark, and the switch is far away, the sufferer better two o'clock would stand at the door and wait for help than overcome your fear and will. And none of the arguments of reason, like "Well that's stupid" does not help, because the horror will be stronger.

In addition, a person suffering from this nervedisorder will experience physical discomfort. "It is possible to list a few key symptoms that can be used to distinguish between a normal fear of the obsessive - explains psychologist Olga Sorokina. - Among these signs of feeling of suffocation, spasms of the throat, palpitations, feeling of weakness, body numbness, a feeling that is about to come fainting, copious cold sweat, trembling all over the body, vomiting, or diarrhea, the body seems to "not their" stop listening. "

But not to be confused with another phobiaa kind of fear, so-called "post-traumatic stress disorder" occurring as a reaction to traumatic events, such as an accident. Those who happened to survive a traffic accident but still receive at the same time serious injuries, knows how difficult then to sit behind the wheel of the car, cross the street and so on. In my head every now and then there are the images of experienced and the person is no longer a master: Well, he can not bring himself to turn the key in the ignition and go - scary. It would seem, than this fear is not a phobia? And the fact that it is not intrusive and has quite a specific cause. That is, this kind of disorder is a kind of expression of the self-preservation instinct.

There is an exit

"The surest way to get rid of a phobia,existing today - is psychoanalysis, - says Olga Sorokina. - The reasons for such unconscious fears are often hidden away very far. The man himself will not be able to figure it out. Psychoanalysis - it is expensive, difficult to find a good specialist, but it is the best option that allows you to identify the source of fear. "

Identify causes - a very important point. The fact is that if a person has a particular obsessive fear, then it is necessary to his psyche. For example, fear of public transport can be no more than a reluctance to go on to work in the morning. Declare that you hate your job, it is not so easy, that invents itself phobia sufferer. Like, on the job, I'd love to, but the metro (bus, tram, and so on. D.) I'm afraid. Not everyone can be so keen to own guess where the shoe pinches, all the more so in relation to itself to be objective very difficult.

However, even if the cause is found, ridneurotic from its problems can only be the case if he wants to. Otherwise, the place of the old phobia immediately come new, because with its help, he solves his problems.

The instinct of self-preservation

Subject phobias is huge, it is not about a weightyTom. Obsessive fears interfere with life, spoil the nerves not only the carrier of the disease, but also its surroundings. And, of course, not be allowed to take precedence over their own lives. However, fears are completely eradicated, too, it would be wrong. "Reasonable" fear causes us to be cautious and prudent. Afraid of the dark, we do not tempt fate and climb at night on unlit wasteland. Similarly, sane people do not climb on the slippery roof of the house - afraid to fall. And by the way, you know that the complete absence of any kind was fear, the lack of real, not declared by a sign of severe psychiatric disorders.