What is suicide? What are the different types of suicidal behavior? The answers to these questions can be found in the article.

The man decided to commit suicide when under the influence of
or other circumstances of his existence loses its meaning. But him
loss - though necessary but not sufficient condition for suicidal
behavior. Need further revaluation death. Death must buy
a certain sense, and then the idea of ​​it can turn into a
purpose of the activity. And finally, are often events that push to suicide,
It deals a powerful blow to human values.

The decision to make
suicide - an act of moral choice. preferring
suicide, a man relates his motive and the result takes
responsibility for self-destruction or the shifts
responsibility on the other. Either way, when a person's suicide,
he sees it not just the action, leading to the death, but also a certain
act of carrying a "message of" for the people, causing their attitudes, evaluations
and opinions.

Numerous observations give reason to believe
even if the true suicides (i.e., those which do not aim
is blackmail), their immediate goal - the cessation of life - in
most cases do not coincide with the motives of suicide behavior.
Suicide is like a tool serving a different, superior
motif, not deadly, but it is life. The paradox of suicide
It lies in the fact that the termination of life is filled for a suicide
moral and psychological meaning. However, this is not such a paradox.
If suicide does not make sense, like all other behavioral
acts, it would not have been the murder itself, that is a conscious act.

"Protest" - A desire to punish the offenders, harm them even if the fact of his own death.

"call"
- A cry for help, a lack of attention. The meaning of such a suicide
kind - to cause his death, sympathy, compassion for others.

"Avoid"
It aims to get away from the pain or punishment. For example,
let the man shot in the forehead, squandered the public treasury.

"Self-punishment"
- A sort of dialogue between the two "I": the judge and the defendant. The moral sense
this suicide - atonement ( "No, I'm not after such an act
worthy to live ").

"Renouncement": Here the target
suicide and the motives are almost identical, and therefore the meaning of
self-destruction can be characterized as a complete surrender. 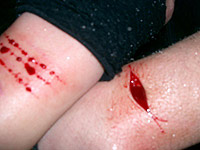 All
These types of suicidal behavior - are analogues obschepovedencheskih
strategies in conflict situations, and that they comply with the same types
moral and psychological position of the person: protest and accusations
others; call for assistance; evasion and escape from combat
difficulties; self-incrimination; no-action and surrender.

If
analyze individual style of behavior and conflict resolution
many, it becomes clear that in situations of their reactions are usually
gravitated to the type of solution they have chosen as
suicide.

Crisis state prior to suicide,
It can be called "overlap" source of life meaning: there is
blockade of life goals, the idea of ​​the impossibility of self-realization,
the gap between what "should", and that is, between the private and
environmental life. As a result - lost sense of life, interest
to life, perspective, and therefore - and the incentive to work.
There is alienation and hopelessness, a feeling of painful and
hopelessness of life.

Such conditions may arise not only
result in a severe traumatic event, but also as a result of
series of life's difficulties.

Thus, the main mechanism
specific to suicidal behavior and initiating act of suicide - is an inversion (revolution) attitudes toward life and death. Life loses
all degrees of positive attitudes and perceived only negatively,
whereas death changes sign from negative to
positive. From this point begins the formation of target
suicide and development plan for its implementation.