It turns out that some patients with asthma, you can go diving. How to evaluate what the patient can dive, and what - no?

Asthma - a disease that affects small andmedium bronchi. During an asthma attack occurs bronchial constriction that prevents the passage of air in and, more importantly, from the alveoli, where gas exchange occurs. An asthma attack can be caused by three reasons, among which the spasm of the muscle fibers of the walls of the bronchi, swelling of the tissue lining the inner surface of the bronchial tubes, or bronchi obstruction of mucus secreted by these tissues.

Allergic attack is often a reaction toany substance, such as pollen, animal dander, house dust or other allergens. In some patients, the attack caused by physical activity or the transition from breathing warm air on the cold breath. Sometimes the cause is a viral infection of suffocation. Potential incentives for the development of an asthma attack very much.

During an attack the patient has asthma,due to difficulties in breathing air passage heard wheezing especially during exhalation. With regard to diving it is important that patients with asthma breath causes more difficulty than the breath, that is, there is a tendency to delay the air in the lungs. In severe forms of the disease narrowing of the bronchi can cause significant difficulty in breathing and lead to death.

One of the most important aspects when discussing the possibility of diving in asthma is that the severity of the disease varies widely.

There is a large group of patients whomore appropriate name "former asthmatics." These are people who suffered from asthma as a child and as nearly half of all children with asthma, the disease grew in puberty, and at the time of the survey do not suffer from attacks for a long time and do not take special medications. First, some "former asthmatics' diagnosis could be placed wrongly. Unfortunately, such as asthma diagnosis is put on a lifetime, especially in the past, when a person was considered unsuitable for diving because delivered in childhood diagnosis of asthma. It can be identified as a group of asthmatics who experience difficulty breathing only occasionally, typically in response to stimuli clearly identifiable, for example a cold. And finally, there is a group of patients whose asthma attacks are quite common, and they are constantly taking medication. The division into these three groups is very conditional, and often a person can not be clearly attributed to one of them. To assess the state of health of each patient should be individualized, and my firm belief is that the name of asthma includes many different pathological conditions.
When asthma are two main usetype drugs. the first type of medications relieve symptoms of the disease, when the attack had already evolved. Their action is based on the relaxation of bronchial walls, though some funds are directed to the removal of the tumor and the termination of mucus. the second type of drugs are used to prevent attacks. They take the time, even in the absence of any symptoms. These preparations blunt allergic reactions to irritants and are often very effective in the case of correct reception. Recently, new drugs, which are based on a combination of both these actions, and which allow you to catch attack symptoms for a long time, thus preventing the development of the subsequent symptoms.


Problems that may create asthma in immersion. 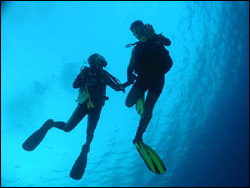 There are three well-known aspect of the diseaseasthma, which may be a contraindication to perform dives. After reading this article, you will realize that, at least, some of them are speculative and follow more of a principled attitude to the question of what the real danger.

Firstly, it is believed that more patients with asthmaprobably related to the development of pathological conditions diving. We were all taught that the basic rule of diving-always breathe evenly, never holding your breath. If the diver carries ascent breathhold, expanding air can damage the delicate lung tissue, causing air bubbles may enter directly into the blood in the blood and the brain, causing the development of arterial gas embolism (AGE). In asthmatics there is a danger that if the narrowing of the bronchi occurs during the dive, the expansion has appeared in a closed air space during ascent could lead to the same problem. Another danger lies in the fact that pre-dive intake Ventolin medication, relieving asthma attack reduces the efficiency of removal of nitrogen bubbles from the venous blood. The remaining bubbles circulating in the blood can get into the arteries, which could theoretically increase the likelihood of developing decompression sickness.

Secondly, asthma substantially restrictsthe ability of a person to effectively perform exercise, which can significantly reduce the safety of the dive. Indeed, it is difficult to object to the statement that shortness of breath hurt man to swim to the bot, once for the water.

Third, not only the asthma could potentiallyhinder the implementation of immersion for the above listed reasons, but also the dive can provoke an attack from the development of the exercise or breathing cold, dry air from the cylinder. Furthermore, it is known that the regulators are often passed a certain amount of salt water, which can be a stimulus for the respiratory tract and cause an attack in some patients.
The problem is that we do not know,how all these fears are really serious. No one has ever studied a large sample of patients with asthma to monitor their dives during the many years of diving. There is some evidence from retrospective surveys, which can not be considered fully reliable. These surveys indicate that many patients with asthma (including the active form of the disease) are engaged in diving, and that although their relative risk, and possibly increased, the absolute risk is still quite low. What do I mean by that mean? For example, in one review indicated that the probability of arterial gas embolism in asthmatic twice higher than neastmatika. Sounds awful? But here it should be noted that the risk of AGE in neastmatika is 1 in 50,000, and therefore have an asthmatic - 1 to 25000. It is with this kind of difficulties we face when deciding whether a person is sick with asthma, diving. The risk may be increased, but still small. In this context, the question arises, how great must be the risk to consider it unacceptable. It is obvious there is no single answer here.


Evaluation of the patient's suitability for asthma diving.

In order to avoid responsibility for their actions,when assessing the suitability of the patient's asthma diving doctor easiest way to say, "No, you can not be to dive!". This happens often, and the doctor is not to reproach, although this approach is obviously not the best. Indeed, some potential divers after such a failure will go to another doctor and a lie: that is absolutely healthy. I and many of my colleagues encountered it and fully understand the situation. Also, I like a man who by diving a lot of positive emotions, I just can not deny a person, full of enthusiasm, in an objective analysis of his condition and the risk to which he claims to expose the immersion, and not give him the opportunity to make an informed decision based on the information .
What do I mean by a conscious decision? By this I mean that I clearly and effectively explain to the candidate all the risks associated with diving, and give him the opportunity to make a decision based on the information received. However, there are serious reservations. I never use this approach in the evaluation of the candidates, whose risk is considered too large. In regard to asthma, and most doctors will agree with me that the more active form is the disease, the greater the risk it brings when making dives. Those people who have asthma attacks occur frequently, can not be considered fit for diving, even on the basis of a conscious decision, since their risk of committing too high dive. Those who suffered from asthma as a child, or does not have such a serious form of the disease, will not expose themselves to far greater risk than the rest of the divers, and you can give them as adults, the opportunity to make an informed decision.
In everyday life we ​​all have todecisions by weighing the potential risks. Sitting behind the wheel, we all know that the higher the speed, the greater the risk and the more serious consequences of the accident, but nonetheless many still speeding. Why? Yes, because analyzing the situation, the person realizes that the pleasure of driving fast at the moment for him is more important than the potential risk. We make a conscious choice, sitting in the plane, playing rugby, cycling on the road. The same goes for diving, a potential divers worse informed of the inherent risks of the sport than many other potentially dangerous activities. And in this case the role of the doctor is to adequately inform the person who came to him, giving him the opportunity to make an informed choice.

My approach to the assessment of the suitability of the patient's asthmaDiving is as follows. Firstly, I have carefully studied the history of his illness. Those who have asthma I find in the active form, I say that they can not engage in diving, and explain why. Next, the choice for them. In principle, they can go to another doctor, and lie, but at least they are at the same time will know what the go. Please note, I try to convince them not to do so.

Those who have not experienced asthma attacks andI do not take medicine for many years, can usually dive without any additional examinations. But I always warn them that the former disease is slightly increased risk of their dives.

Most of the questions usually occurs with thosesomeone attacks occur once or twice a year, during cold or in the spring, during the flowering of certain plants. I used to long to explain to them all the possible risks they commit dives, and if the desire to dive at them then is not lost, I spend additional inspection to ensure that no physical exercise or inhalation of salt water particles (when the same salt concentration as the in sea water) did not induce bronchoconstriction. If this additional check does not reveal contraindications, and the person completely confident in his desire to dive, I usually give him permission to scuba diving lessons. Unfortunately, carrying out these checks and preparation of all documents takes time and money, but in any case it is better just to say "no", without going into details.