sleep apnea - a sleep disorder,characterized by a high incidence of upper airway obstruction. Sleep apnea not only causes daytime sleepiness and can lead to lethargy, but also presents a danger to life in the absence of timely treatment. Learn the difference between obstructive sleep apnea syndrome from the central sleep apnea syndrome, what are the treatments for this disease, and how effective therapeutic mask. 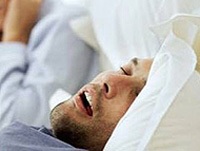 Muscles of the upper windpipe passedair flow to the lungs. In the dream, the muscles relax, but the inflow of air to the lungs does not stop. In some people, a channel for air flow is narrowed significantly, and that hinders breathing. Sleep apnea - a condition in which the airway obstruction leads to disruption of the normal flow of air to the lungs, which leads to snoring and breathing stops short.

Attacks of respiratory arrest are replaced by sharpattempts to resume breathing, accompanied by loud sighs and sharp snoring. As a result, this disease leads to disorders of sleep and disruption of biological rhythms of the body. Also in this case, reduced oxygen levels in the blood, which leads to fatigue and sleepiness. In severe cases of sleep apnea may result in pulmonary hypertension. This disease is most prone full of elderly men, but sometimes it develops in women.

One of the causes of obstructive sleep apnea syndrome It can be a large diameter neck. Sleep apnea - a lethal disease, as it can trigger a heart attack or stroke. Due to the frequent attacks of apnea during the day a person feels drowsiness and fatigue, which can lead to injuries in the workplace and the DPT.

Diagnostic procedures to help identify sleep apnea and to determine its severity:

The goal of treatment of sleep apnea - obstructive preventrespiratory tract and, as a consequence, stop breathing. Patients are recommended to maintain a healthy body weight and to refrain from alcohol consumption or sleeping pills before going to bed. Continuous positive airways pressure - a form of mechanical ventilation. This procedure is the treatment of sleep apnea is that the patient during sleep wears a special mask that covers the nose and mouth, which prevents airway obstruction.

sleep apnea syndrome treatment canlimited to lifestyle changes, medication, however, can not do without surgery in some cases. First of all, patients are advised to lose weight and stop smoking - it is one of the major factors in the development of sleep apnea.

This may improve nasal breathing. The use of continuous positive pressure in the airways helps prevent snoring and episodes sleep apnea. The rate and pressure of air flow that enters through the mask, is determined by the doctor.

Obstructive sleep apnea -common sleep disorder caused by obstruction of the trachea or windpipe through which air is introduced into the body. Obstruction may cause tongue, tonsils or uvula. In some cases, obstruction of the air flow creates adipose tissue.

What is the syndrome of central sleep apnea 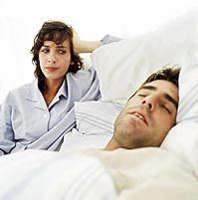 Central sleep apnea syndrome - a disease inwherein the organism as would forget to breathe for a few seconds. This sleep apnea syndrome is not caused by the obstruction, he has a neurological origin. Central apnea is manifested by short bouts of complete cessation of breathing. This neurological disease may be accompanied by impaired swallowing mechanisms, weakness and numbness of the extremities. Diagnose Sleep Apnea Syndrome central magnetic rezonanskaya imaging and monitoring of sleep throughout the night.

Central sleep apnea can lead to:

Sleep apnea is often treated surgically -remove the cause of airway obstruction. Often, for the treatment of sleep apnea remove enlarged tonsils or adenoids. Uvulopalatofaringoplastika - another common surgical procedure which is performed sleep apnea. During surgery, the patient excess tissue removed from the rear wall of the throat in order to increase the size of the upper airway.

As a rule, uvulopalatofaringoplastikeremove the soft palate (velum), located in the lower part of the back wall of the throat. This surgery is performed under general anesthesia. Some of its leading clinics also operate with a laser under local anesthesia. Reconstructive surgery of the nose straighten a deviated septum and removes excess tissue, to improve permeability of the nasal airway. Changes in the bone structure of the upper respiratory tract can facilitate the passage of air, especially when the patient is asleep.

The mask for the positivecontinuous pressure airway using air pressure pushes the tongue forward. Clearing this opens the throat obstruction to the passage of air, reduces snoring and prevent sleep apnea. Mask - is not a method of treatment of sleep apnea, but it helps to alleviate the condition of the patient, reduces the frequency of episodes of respiratory arrest. Individual masks made to order, they fit tightly to the face, repeating the outlines of the nose, cheeks, lips and forehead of the patient. Mask tightly secured to the face that there are no gaps between the skin and the inner surface of the mask.