In different countries, the number of people sufferingAnkylosing spondylitis (inflammatory lesions of the spine and joints), ranges from 0.5 to 2%. According to various studies, the number of infected women in 5-9 times the number of cases of women. A classic case of spinal inflammation was launched Nikolai Ostrovsky: immobility and blindness. Fortunately, modern medicine with therapeutic and preventive measures to prevent such consequences learned.

The medical name for the disease - ankylosingSpondylitis: intervertebral joint inflammation, resulting in fusion of them, which is why if the spine is in a hard case. The first scientist who described the "bamboo spine" as an independent, separate disease, was a Russian neurologist Vladimir Bekhterev. Before him about the disease the medical community did not know.


The reasons for late detection of the disease 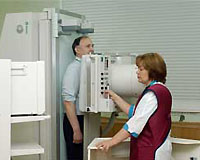 Ankylosing spondylitis exposedmostly very young, between 15 and 30 years old, male. But about 8% of cases occur in an earlier age - 10-15 years. So says the official statistics. Meanwhile, the practice shows that this figure is not entirely accurate. Checked that children ankylosing spondylitis develops almost imperceptibly, its origin can not be recognized by external examination. Changes can only be detected on x-rays, but until it comes to the matter, usually takes several years, during which the child can be examined repeatedly by different doctors with different presumptive diagnosis.

This is not always timely diagnosed andwomen. There have been recent studies showing that women suffer from this disease are not so rare. Another thing is that the female version is characterized by milder symptoms and often takes place in an atypical form. Because of this zavualirovannosti disease more difficult to correct and timely diagnosis.

Late diagnosis - the main reason,which makes it difficult to do in a timely and effective treatment. Most people, being sure that they have sciatica, long walk to the reception to the surgeon or neurologist. And only when the treatment of sciatica does not lead to positive results, they turn to the rheumatologist. At this point on x-rays are already present advanced symptoms of the disease: the fusion (ankylosis) of the sacroiliac joints and calcification of ligaments of the spine.


The early signs of ankylosing spondylitis

At an early stage of the disease, there are several points that require special attention:

If these symptoms are kept for more than three months - immediately contact your rheumatologist.

Established that ankylosing spondylitismay arise in genetically predisposed individuals. The triggers are usually intestinal and genital infections, as well as the stress and trauma of the spine.

As with any disease, with Ankylosing spondylitis is best fought by prevention. Here are six simple tips, the implementation of which significantly reduces the risk of: