Osteoarthritis is one of the mostcommon rheumatic disease and is the largest medical-social importance of all joint diseases. Despite the significant progress made in recent years in the treatment of osteoarthritis, is still topical question of tactics of treatment in the light of the effectiveness and safety of drugs used.

Of particular interest are the local treatment methods,based on nanotechnology. The problem we have discussed with the Head of the Department of Faculty Therapy. A.I.Nesterova academician of the Russian National Research Medical University. Pirogov, honored doctor of the Russian Federation, Doctor of Medical Sciences, Professor Nadezhda Shostak.

- A. Hope, as is known, osteoarthritis - is one of the most common rheumatic diseases. Why is such an abundance?

- In fact, osteoarthritis - the mostcommon rheumatic disease. In 2011, over declared by the World Health Organization (WHO) Decade of bone and joint diseases (2001-2010.), The results of which osteoarthritis is removed first place among the priority issues in musculoskeletal pathology. The occurrence of osteoarthritis is primarily associated with heredity. The important role played by gender: female gender prevails, but soon the men on the incidence of the disease catch up with women, and is associated with smoking, obesity, addiction to beer and stronger drinks.

- What caused pain in osteoarthritis?

- At the heart of the pain syndrome is a pathologyarticular cartilage, joint fluid change, violation of congruency of the articular surfaces of bones, ie pain in osteoarthritis is multifactorial. Going back to the previous question, I can not say it's the number one problem, because there is also a problem such as an inflammatory disease of the joints. However, among the rheumatic diseases of osteoarthritis, of course, it is the leader.

- Nadezhda, what are the goals and principles of treatment of osteoarthritis?

- For the purpose of reduction of pain and inflammation appointnonsteroidal antiinflammatory drugs (NSAIDs), however, as is known, these drugs can cause adverse systemic effects and all patients may be assigned or designated limited. What to do in such cases?

- Indeed, the widely used NSAID in the worldare the drugs of first choice for the treatment of osteoarthritis, but, of course, they can have a lot of adverse effects, especially with frequent use. This is primarily gastrointestinal and renal toxicity effects. Patients who are contraindicated for the appointment of NSAIDs in local therapy may be administered as an alternative.

- Recently, more and more often speak about nanotechnology, used in the manufacture of therapeutic patches, which are just used as a local therapy (eg, patch NANOPLAST Forte®). What are the these patches?

- That's right, medicinal patches that are based on nanotechnology, are of particular interest. In today's market, they presented a plaster NANOPLAST Forte®Which still has no analogues. We are working extensively with patches NANOPLAST Forte®And our doctors are well aware that NANOPLAST Forte® has analgesic and anti-inflammatoryaction, effective relief for acute conditions and for course therapy of various diseases of the joints, spine, muscles and ligaments, and thus is safe and has no side effects.

- Is there any evidence base on the effectiveness of the patch NANOPLAST Forte®?

- Oh sure. One such study was carried out on the basis of our department, city hospital, it was a multicenter t.e.issledovanie based Research Institute of Rheumatology and rheumatological center. The study included 120 patients, and it is quite a big number, which can be discussed in terms of the statistical reliability of the materials. This study was a double-blind placebo-controlled (as placebo patients applied the same type of adhesive, but without nanocomponents). It should be noted that according to the laws of classical studies, we studied the whole status of the patient, any accompanying diseases, the duration of the disease, radiological stage of the disease, and other parameters. All patients had a fairly advanced stage of gonarthrosis, ie it was difficult patients with a long history, as the pain and for reliably diagnose osteoarthritis.

- What was taken as the performance criteria?

- The primary efficacy we thoughtreduction in stiffness and pain intensity in the "target" the knee joint by WOMAC scale, as well as improving the patient's physical activity. state rank compared both physicians and patients before, during and after treatment.

- We have received the results, which did not expect, because even the doctors do not know to which group the used patch NANOPLAST Forte®And in which - adhesive inactive. Around the 4th day in some patients noted a visible improvement. Upon receipt of the final results of the study it was found that the group using NANOPLAST Forte®, Improvement occurred in all patients. Cumulative index WOMAC pain at significantly reduced by 85 mm, indicating a pronounced analgesic effect patch NANOPLAST Forte®. A statistically significant improved overall condition of patients, both in their subjective assessment, and according to the doctors.

- Nadezhda, how to evaluate tolerability patch NANOPLAST Forte® This study? Have there been any adverse events?

- Portability patch NANOPLAST Forte® and inactive patch was evaluated by the frequency and severity of local and systemic adverse events. No adverse effects have been identified.

- When can recommend NANOPLAST Forte®Ie at what diseases other than osteoarthritis, it is shown? 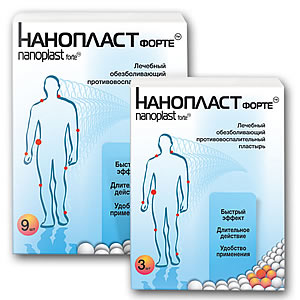 - Before answering this question, I would like to close the topic of osteoarthritis and say NANOPLAST Forte® shown in any form of the disease, starting from and ending peripheral spondyloarthrosis osteoarthritis and related back pain.

Other indications for the patch NANOPLAST Forte® can distinguish degenerative diseaseintervertebral disc protrusion with the development, intervertebral hernia, causing sciatica occurs. Despite the fact that during the acute phase of rheumatic diseases local therapy is not indicated (usually 3-5 at its prescribed th day when the inflammation subsides) Forte NANOPLAST® in this period is indispensable as it is indispensable, and in other stages (subacute or chronic course). Other indications for the use of the patch NANOPLAST Forte® are post-traumatic changesmusculoskeletal, articular apparatus as secondary osteoarthritis develops after an injury, and the pain is very pronounced and may be complicated by the development of complex regional pain syndrome.

Another area of ​​application for the patch NANOPLAST Forte® It is a pathology of soft tissues (such as fibromyalgia, myofascial syndrome), which is found not only in rheumatic diseases

Before using the patch, check the directions for use of the drug