On the verge of baldness

Over the past few years, the number of bald inRussia has slightly decreased. No, the hunting season for them no one opened. Simply technology to restore hair, were widely spread. At least in the major Russian cities.

How to deal with hair loss?

The easiest, but, unfortunately, not the most radical way of getting rid of bald head - wear wig. However, it is much more minuses than pluses, so leave wigs entertainers and cinema. 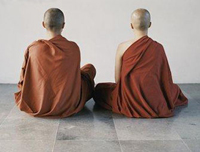 Another method - rub anything into the scalp in the hope not onlysave what is left, but also greatly enhance the overall Shaggy. Folk remedies - is not a panacea, and few people in their right mind and clear memory can be made to apply to the head mask of coffee grounds or watered burdock oil. Note, this is the most harmless recipes.

You can seek help from a pharmacologicaldrugs. But then you must be careful. On the problem of baldness is not quite so many honest people tried to heat your hands. Funds pledged lush hair almost a month after the application - the mass, and to sense - a little.

If the box says that the drug is made by the ancient Aztecs formula accidentally discovered in a corner of the pyramid doctor so and so, you know - you make a fool of corny.

In any case, choose your own treatmentdo not do it. It is necessary to consult a doctor, dermatologist, but rather to a specialist trichologist. That he is engaged in hair problems. The doctor will assess the condition and type of your skin and recommend the drug, which is really appropriate.

Although some clinics, they are stilltransplanted in decent places such a method is not used. It is a lot of complications after implantation of a foreign body in the skin, which is the synthetic hair. It survives poorly, losing an artificial head of hair up to 30 percent per year.

The only option that is justified synthetic transplantation: a man on the head does not remain the property of vegetation suitable for transplantation.

Autotransplantation (transplant of their ownhair) is now considered the most advanced method of getting rid of baldness. Ironically, we owe her appearance is not the new technologies of the XXI century, as one might think.

The first hair transplant described Japanese dermatologist Okuda in 1939. Unfortunately, the doctor died during the Second World War, and the doctors returned to the question of autologous transplantation only in the 1950s.

To date, transplantation technique developed to such an extent that the hair can be transplanted individually. And the new place they are growing is not worse than the old.

For autologous transplantation uses manytechniques, but are all the same: the hair from the donor area (usually in favor of its role neck) are transplanted to a problem (hairless) area. That is not exactly the hair and grafts - specially prepared areas of the skin with hair follicles (multiple pieces). As a rule, one session is transplanted from 200 to 2000 grafts.

The most difficult stage of the operation - do not change, andpreparation of material for this very transplantation. On how well prepared the hair follicles and how they are viable depends on the outcome of the treatment.

The first phase of the operation: from where a lot of hair (donor site)cut a flap of skin. Long and narrow. His finely shred into strips 1500 to 2000 follicles, then divided into pieces for 1-4 follicles. Excess skin is removed. The process for obtaining the graft is performed under a microscope.

Second phase - On his bald head made of mini-incisions in themplaced received grafts. If done correctly, minimal trauma and marks on the skin are left. Only in the donor area will see small seam.

It is important to understand that the amount of hair on the head before and after the operation remains the same. The effect is achieved through the redistribution of hair.

Often the question arises:It can be used for "seeding" of the head hair from other parts of the body? Theoretically - possible. Surgery, by and large, there is no difference where to get stuff.

There is only one "but". Hair on other areas of the body are usually significantly different from the hair on the head. They are shorter, thicker and have a tendency to curl. In some people, the difference is not so striking - that is to have such a transplant is sometimes output, provided that the donor area is sufficiently hairy.