Usually part of medical treatment of nodularerythema is antibiotics. But it turns out, in the treatment of this disease is sometimes possible to do without the "heavy artillery." This article describes the successful experience of getting rid of erythema nodosum using ordinary propolis. 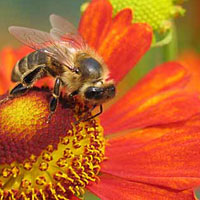 Erythema nodosum is not always easy to treat. And yet, before taking of antibiotics, it may be wise to try the most simple ways to get rid of this ailment?

That's what told about their own success stories to get rid of erythema nodosum in using national funds visitor to one of the medical portals:

- One day, while working on the farm harvesting potatoes,I brought it into the wound infection. Soon his hands were red spots. I - to the doctor. He once said that: "I worked without gloves in the garden, and was cut!"


Written out ointment, but, apparently, I'm late. On the legs from the knees to the toes appeared subcutaneous lumps and very painful. I went to the surgeon, then a dermatologist. He "comforted": it is erythema nodosum, treatment lends itself poorly. Written out tablets and all.

I hardly moved behind the counter - workedseller. But one day the neighbor came into the store, asked what had happened to me. He promised to cure. And he brought the canvas, impregnated with propolis. This hessian beekeepers hive covered with a lid. He said that he got rid of eczema on his legs after a week went by wrapping a foot canvas, like socks.

All did as he ordered. At night, he wrapped the leg in the canvas and went to bed. The next morning I wake up, and left only three cones! Repeat the procedure two more times. Thanks to Peter Ilyich - all gone, will remember his age.


Ill it more often women, particularly ifnature of the work they have to be long in the cool place and as long stand on his feet. Disease begins acutely, the body temperature rises to 38 - 39 ° C, there is a feeling of general malaise, chills, weakness, severe fatigue, joint pain, headache, etc. All these phenomena usually persist for several days..

Against this background, in the skin and subcutaneous tissue(Usually on the shins and forearms) appear dense and painful nodules that grow quickly and reach the size of a large walnut. Often in this period, patients notice a sharp pain, a burning sensation in the affected limb when lowering it down, sometimes they can not walk. The number of nodes is small. The skin over them initially bright pink after a few days it becomes intensely red, then brownish-red, green-yellow (flowers, like a bruise).

During the period of full development sites rise aboveskin, then gradually flatten and resolved, leaving a temporary pigmentation. The lifetime of each individual element of about 2 weeks, the disease generally lasts for 3 - 4 weeks.

Erythema nodosum is a toxic and allergic vascular response that occurs in various acute and chronic diseases and intoxications.

Of great importance here is strepinfection and erythema nodosum often occurs after undergoing a sore throat. Chronic erythema nodosum is manifested in much the same way as acute, only nodes are usually isolated and stored for 2 - 3 months, and the disease itself can last up to a year.

It should be remembered that erythema nodosum can beas a separate disease, or a symptom of another disease. Therefore, even if you decide to be treated for erythema nodosum independently qualified physician consultation will be completely superfluous. Be healthy!