What is the age of demodicosis

What demodicosis century? What causes demodectic century? How is the diagnosis? How is the treatment of demodectic mange century? The answers to these questions can be found in the article.

Standing, one morning, you find that youworried itchy eyelids, a feeling of sand in the eyes, your eyelids turned red, began to fall out eyelashes - it is the ciliary mite - Demodex (Demodex folliculorum). Normally Demodex is on the skin, it enters into the composition of microflora, which under normal conditions does not cause disease. The mite feeds on desquamated cells, and can not detect its presence any painful symptoms. Demodex mite is very small. Its dimensions are 0,2-0,5 mm, making it invisible to the human eye. The mite lives in depth sebaceous and meibomian glands, hair follicles in humans and mammals. The disease, which causes an excessive increase in colony subcutaneous mites called demodex.

Favourite localization of the tick - eyelids, facial skin,Region brow, forehead and nasolabial folds, chin and the ear canal. mites waste products contribute to sensitization of the organism to cause specific damage to eyes - Demodectic blepharitis and blefarokonyunktivit.

The main manifestation of demodectic mange areredness of the edges of the eyelids, eyelid skin peeling, loss of eyelashes, thinning eyelashes, eye fatigue. In the initial stage, patients complain of constant, sometimes intolerable itching, especially after sleeping. Happy worried feeling cramps, acrid sticky discharge, an irresistible urge to scratch, wipe his eyes. The eyelashes appear scales, mucous discharge accumulates on the edge of the eyelids, forming a yellowish crust. In the anamnesis: frequent barleys, loss of eyelashes, recurrent acne. Washing with soap and facial tonics and causes itching and burning. To exacerbate the process can lead moisturizers, artificial salyarii stay in the sun.

The disease is chronic with seasonal exacerbations in spring and autumn. 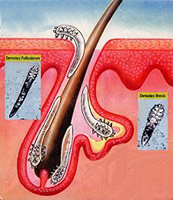 To develop demodectic mange presence alonepathogen is not enough. As mentioned above, this mite is present on the skin of so many people (opportunistic pathogen), but causes disease by no means all of them. The main reason for the intensive breeding of ticks is reduced immunity, which in turn may be due to so many reasons. Thus, the emergence or worsening of demodectic mange can occur in chronic diseases of the gastrointestinal tract, endocrine system diseases, hepatitis, metabolic disorders, uncorrected refractive pathology (hyperopia, myopia), individuals with oily porous skin with seborrhea. Also, reduction of protective properties of the skin occurs with prolonged use of ointments containing corticosteroids (prednisone, hydrocortisone, and others.), During pregnancy, the constant mental stress, alcohol and others.


How is the diagnosis of demodectic century

Diagnosis of demodectic mange is simple enough. Diagnosis is usually based on the ophthalmic examination, signs of the disease, as well as by microscopic examination. Since the upper and lower lid of each eye lashes special forceps are taken, they are placed on a slide and examined under a microscope. Such a study enables rapid diagnosis and prescribing treatment. Typically, this study is carried out for any suspected demodicosis.

How is the treatment of demodectic mange century

The complexity of the fight against mites is determined by subcutaneousthe fact that it is our symbiont (individual party symbiosis), that is, its existence is the norm, not the disease. However, these mites bring trouble only when they begin to multiply rapidly. If there was a disease is completely cured of it by yourself is almost impossible, t. To. The need to eliminate the cause of mites breeding. As a rule, the treatment of demodex are trying to remove the aggravation of the disease and to achieve a more or less long-term remission. Used with special drugs that can assign you to a doctor. In addition, you need to stick to the diet, in particular, be excluded from the diet spicy and salty foods. Avoid sun exposure.

Along with the treatment carried out disinfestationbed clothes (because there is the possibility of infection of others through contact with personal belongings and toilet articles; repeated self-infection). Are counter creams containing honey, adversely affect vasodilator treatments, especially bath.

If you suspect that you have demodexurgently need to be examined and to consult a doctor-ophthalmologist. Delays of treatment may lead to a rather complex eye diseases, and in some cases irreversible consequences: ulcerative blepharitis followed by scarring. Keep in mind that this disease may be at a long-term course, in some cases accompanied by a more dangerous lesions of the eye.