Home>Surgery>"Cleft lip" and "palate": the tricks of nature

"Cleft lip" and "palate": the tricks of nature

It is easy to imagine what a shock throws the parents of the child's birth. They plague themselves questions: for what? Why this attack? What caused the defect of their child?


Meanwhile, the prevalence of "harelip"second only to congenital clubfoot, and in most cases the reason for the birth of such a child - heredity. So it is, to use a metaphor - the tricks of nature. Factors considered the risk of alcohol, smoking, maternal age (birth after 35 years). Cleft lip and palate occurs in the first two months of pregnancy, when maxillofacial organs are formed. 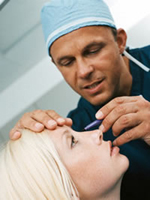 Learn about the presence of such a defect babyYou can use ultrasound, but unfortunately, only very late in pregnancy. And so, if the family already has a child with a "hare lip", the parents, before you decide on a second, you should consult a geneticist. And yet, in most cases, the parents remains a secret, why they have to "get" this child. The reason, as a rule, lies in the fact that in the first two months of pregnancy - and during this period there is a bookmark maxillofacial organs - the fruit has experienced some adverse effects. For example, the mother had the flu or infectious disease on the background of a high temperature, she had morning sickness, she continued to work in hazardous chemical or radiation production, living in ecologically unfavorable areas. The trigger may be alcoholism or drug addiction of women, as well as constantly under stress.

Ways of prevention are planned taking into account theregional causal factors determined in a survey of parents of sick children. Typically the presence of all the mothers of one or two risk factors, such as gynecological pathology, bad habits, chronic diseases of internal organs. The immediate cause of the birth of a child with a cleft face are the effects on the expectant mother in the first three months of pregnancy, chemical factors (22.8%), mental health (9%) and mechanical (6%) of injuries, biological (5%) and individuals (2% ) influences. Cleft upper lip occurs in one in 2500 newborns. It can be bilateral or unilateral. In the latter case often the left than on the right. Bilateral cleft upper lip is often accompanied by projecting forward rostral bone of the upper jaw. Taking into account the individual characteristics of each case used a variety of options for plastic surgery.

Cleft palate (cleft palate) - commonapproximately 1 in 1,000 live births. The reason for the delay is the fusion of the maxillary processes with the opener. There are four forms: cleft palate, cleft soft and hard palate part, complete unilateral cleft soft and hard palate and complete bilateral cleft. In 1991, British scientists announced the next opening - determining gene responsible for the development of common diseases - cleft palate, or "cleft palate". This discovery will help to improve the diagnosis and treatment of this disease. Worldwide, approximately one out of 600 children is born with a "cleft palate". Researchers from Imperial College London found that the disease is caused by changes in TBX22 gene located on the X chromosome. The discovery was made using the information obtained in the analysis of human genome decoding data.

In its work, the biologists studied the DNA of seven generationsOne Icelandic families with this hereditary disease. For the mapping of the altered gene, DNA representatives of the family compared to the genome of the inhabitants of Canada, Brazil and the UK. Information about the DNA of seven different generations managed to collect due to the fact that a small number of people live in Iceland, and medical information about them is collected and well-organized.

In the process of birth of the child with this pathologycomplications may occur due to contact with the patient's airway amniotic fluid. A newborn difficulty breathing, he can not suck and thus falls short in weight. Before surgery, it is fed a special spoon, which is put on the bottle. With this method, doctors and parents are taught. Unfortunately, children with such defects more susceptible to other diseases. After entering the air is humidified body, not warmed, and it causes inflammation of the airways, is fraught with inner ear diseases. They also suffer from the maxillofacial skeleton, dentition number, there are changes in the hearing aid. Note that the defect upper lip and palate occurs both alone and in combination with other pathologies jaw.

The first surgery of cleft softsky did two centuries ago in France, a doctor-dentist. In the arsenal of today's medicine several techniques of plastic surgery to correct craniofacial malformations. The most effective is considered chiloplasty - correction of the upper lip and uraniscoplasty - sky correction. Surgical operations are done usually in several stages - it depends on the degree of pathology. In some cases, in order to achieve a better result, interference is produced 2-3, in others - 7.5 or more. Alas, completely avoid postoperative scar can not, despite the best efforts of Plastic Surgeons.

Experts disagree, in whichage and spending uranoplasty cheiloplasty: some prefer to do surgery in infants 3-6 months, others - at a later date. What method to prefer, experts advise watching the child at birth. But in any case, all the little patient treatment, including rehabilitation, should be completed by the age of six.

For a long time it was thought that it should be doneas late as possible - when the maxillofacial system in humans has already been formed. Our experience, and overseas too, tells a different story - the sooner the parents to consult a doctor, the better. The operation on the lip can be performed starting at 2 months, in the sky - and a half-two years of age. It must be remembered that in complex cases to be not one, but several operations. In this anatomical defect lip and palate should be eliminated to 3 years, when the child begins to form it. Otherwise, he will have the pronunciation characteristic "nasal" tone.

From 3 to 7 years are made morecosmetic surgery in order to improve as much as possible the child's appearance. For school child should be fully rehabilitated, then he will be able to attend a normal secondary educational institution. This is all the more important because of their mental and intellectual development of a child is absolutely no different from other children. For assistance should be treated only in specialized medical centers involved in this type of pathology. There must be all the necessary specialists - neonatologist and pediatrician, orthodontist, surgeon, therapist, educator and psychologist, a social worker. The latter is important, because such children are considered disabled and must be registered in the social security system, to receive a pension. And only after all the rehabilitation activities the child can be removed from the register of disability. This is a fairly complex pathology, but to give up should not be - modern medicine is able to help these children.