Home>Therapy>Less sleep - worse than you live? What threatens to sleep deprivation?

Less sleep - worse than you live? What threatens to sleep deprivation?

Some people sleep eight hours a night, while others pouredsix hours, and others, not wanting to give their precious time Morpheus, trying to limit ourselves to three hours of rest. Who receives it? How many actually have to sleep and what can be fraught with lack of sleep? 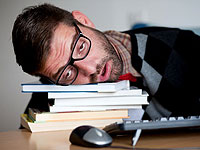 Scientists are sounding the alarm: modern people sleep much less than their ancestors. Only in the last hundred years of urban residents sleep duration has decreased by 20%. Compared with our parents, we spend every day in the realm of Morpheus 30 minutes ahead, and our children have enough sleep for hours. According to statistics, today every adult person is deprived of one and a half hours he needed healthy sleep, what pays the most chronic fatigue and various illnesses.

Primarily affects the lack of sleepthe human immune system, reducing its ability to fight infection, because lack of sleep during epidemics is fraught with the development of acute respiratory viral infections, including influenza. Statistics says that people whose night's sleep lasts less than seven hours a night are three times more likely to suffer from colds. Moreover, emaciated body is unable to actively fight the pathogen that contributes to the complications.

What to do? Even if the rush job and need to stay, if three hours spent working outside the walls, you seem to be too fleeting, insufficient for recreation and entertainment, never "credits" at the time of sleep. During epidemics give up watching television late, reading books, visiting clubs and parties with friends: a good night's rest will help to protect against infection.

Who does not sleep, at that heart aches

Chronic lack of sleep - serious stressfactor to a human body. Scientists say that the constant lack of sleep for two months can lead to heart attack or stroke, even in otherwise healthy people, not to mention those who have heart disease and blood vessels.

Lack of sleep is accompanied by constant fatigue,decrease in attention and memory, requires the mobilization and concentration of forces to carry out the usual everyday affairs, and this leads to a nervous overstrain, the release of stress hormones, a narrowing of the peripheral blood vessels, increasing blood pressure and as a result, a hypertensive crisis, a heart attack or stroke.

What to do? If you are unable to fully sleep at night, you need to lie down for half an hour in the afternoon, after lunch. In Spain this issue has been resolved simply legalized there siesta, the Russians will have to do daily sleep at the weekend, but this is enough to significantly reduce the degree of internal tension and avoid the serious problems caused by lack of sleep.

Old age comes to everyone, but to those whoenough sleep at night, she tries to come before the put. The fact is that during sleep in humans involves the synthesis of growth, which is responsible for cell division and the constant renewal of body tissues. If there is insufficient sleep and growth hormone deficiency regeneration processes are broken, begin to dominate the processes of decay, there are various diseases and old age begins.

What to do? Even young people suffer from insomnia and the elderly, it is found more often. To make it easier to fall asleep, you need to how to spend the last evening calmly as possible. Evening walk, a leisurely conversation with a loved one, a loose dinner, a glass of warm milk with honey at night - tested and reliable methods that help to quickly dive into the deep sweet sleep.

Lack of sleep and cancer

The development of cancer is associated withweakening of the immune defense of the body, with the inability of immune cells to track and destroy all naturally occurring in the body "germs" of cancer. In turn, the work of the immune system is subject to biological rhythms controlled by the hormone melatonin.

Melatonin is often called sleep hormone, 70%its amount is synthesized at night, from midnight until four in the morning. If a person has a habit of not sleeping at this time, he has violated the processes of formation of the hormone, and sooner or later there is a deficit. Subsequent violations are most relevant to the work of the immune and endocrine systems, and lead to the development of cancer. Scientists believe, but the lack of sleep - one of the risk factors for breast cancer in women. If a woman has enough sleep just once a week, the likelihood of getting breast cancer increases by 14%, if the sleep duration is truncated to four times a week, the chances of the disease increased 2.3 times.

What to do? It is necessary to normalize sleep at night, and if this is not possible to compensate for a lack of nighttime sleep a day of rest. In addition, doctors insist that working the night shift - not for women.

Who does not sleep, the fatter

People who are overweight and have tried a lot ofdiets hardly believe that their problems may be related to lack of sleep. After all, they do not make night raids on the refrigerator, and also active at night, rather than bask in the pillow. They even manage to get tired at night and returning in the morning, exhausted, fall into bed.

According to statistics, among the fatties fatties and a huge number of people sleeping less than six hours a day, and among those who lived by a three-hour rest, they are 73%.

completeness The secret lies in such cases,violation of synthesis of two hormones: ghrelin, which causes hunger, and leptin, which controls appetite. With a lack of nighttime sleep increases the amount of ghrelin by 28%, and leptin production falls by 18%. The result - an uncontrollable feeling of hunger, lack of congestion control, huge portions of food and additional extra kilos.

What to do? Stop conduct nocturnal and build a dream. Any low-calorie diet will not bring significant results, if not to help the body eliminate the hormonal disorder.