The body reacts to the change in weather likeantenna specific receptors located on the walls of the carotid artery. In addition, human health is greatly affected by changes in atmospheric pressure and magnetic storms.

The concept of biorhythms 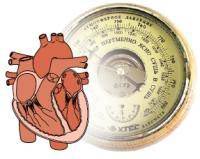 Currently studying meteopatii engaged in a science - biometeorology. It has been found that the basis of occurrence of the violation is meteozavisimosti biological rhythm of living organism.

Biological rhythms - it periodicallyrepeated changes in the nature, intensity of biophysical, biochemical processes, starting from the level of a single cell and ending with the body as a whole. All biorhythms can be divided into several types.

high cycle, or ultradian (ultra -over, dies - day), jet lag from a few fractions of a second to 20 hours. To view a high-frequency rhythms are bioelectrical activity of the heart (recorded via ECG), brain, muscles, nerves (can be locked with the EEG, electromyographic), cycles of "sleep - wakefulness", alternating periods of activity and relative calm in the newborn.

Midrange, or circadian, circadian(Circa - about, around), characterized by cycles of biorhythms in 20-28 hours. These include daily fluctuations in hormone levels, body temperature, blood pressure, heart rate, urine output, sensitivity to drugs. It is the most vulnerable and sensitive to external influences biorhythms, usually failure of these cycles is the basis meteopatii.

At low frequency, or infradian (infra -less under), biorhythm cycle is repeated at least once a day. It okolonedelnye biorhythms (for example, changes in performance during the week - it is higher in the middle of the week, and the lowest on Monday and Friday); okolomesyachnye - such as the menstrual cycle in women; seasonal (changes in metabolism, immune diseases and, depending on the time of birth year); okologodovye - fluctuations in the intensity of growth and development of children first year of life (in the first half of the growth of children, tend to be more intense than at the end of the year), decline of vitality and immunity before and during the month after the next birthday. The longest of the low-frequency cycles - obschezhiznenny (birth, childhood, adolescence, youth, maturity, old age, old age, death).

The most clearly defined cycles, which, one way or another, correspond to the cycles of nature - day lunar month, year, etc.

The central regulator of all life cyclesIt is a part of the brain - the hypothalamus and brain appendages located near the hypothalamus - pineal gland and the pituitary gland. Received numerous signals from the "periphery" of all the other organs, the brain structures regulate the activity of all vital processes in the human body, adjust the "internal clock" of each of us. The abrupt change of climate and time zones - for example, on long-haul flights - can cause total failure of biorhythms, and total development of DS - temporary disruption of biological rhythms. In total desynchronosis violated almost all the functions of the body; person feels lack of energy, increased fatigue, worsening sleep, attention, decreased appetite, performance, change blood pressure, pulse rate, respiration. With the changing weather conditions (if any vagaries of weather, geomagnetic storms, increased solar activity, seasonal reconstructions) body often operates on the principle "where the thin, there and tear", causing predisposed to meteopatii people these or other symptoms, which are based on partial desynchronosis. It is characterized by fluctuations in blood pressure and heart rate, insomnia, with the violation of the alternation of normal sleep phases, acute exacerbation of chronic gastritis, colitis, gastric ulcer or duodenal ulcer, worsening of other chronic diseases.

Most often suffer from circadian cyclic processes. By meteosensitivity more prone women than men, and residents of megacities - in comparison with the inhabitants of rural areas.