The climate is an integral part of our lives,so the weather has its influence on the character, health and even human behavior. meteozavisimosti phenomenon being studied for a long time, according to statistics about a third of the adult population are sensitive to weather changes.


Thus, changes in the weather or the seasonsour body begins to lack or excess of some other factors that bring down the correct course of our "biological clock" for violating internal processes and the work of the bodies impair health, provoke the development or exacerbation of disease.

The role of light in meteozavisimosti 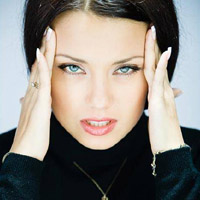 Light is one of the most important factors,affecting the biological cycles. For example, familiar to many mood swings, feelings of depression, apathy have less to do with a bad fall or winter weather, namely the lack of light. Moreover, the body easily distinguish natural sunlight and artificial light, as they have differences in spectral composition.

The receptors of the retina eyes react to lightstimulus and send signals to the central nervous system - to the hypothalamus. The hypothalamus by hormonal, neural regulation carries out the seasonal adjustment and adaptation of the organism. However, such a "perestroika" period, the body is extremely vulnerable to the effect of various environmental factors.

Of great importance in the synchronization of biorhythms inDepending on the lighting belongs epiphysis - pineal gland located in the brain. Thanks photoreceptors epiphysis even blind people on the level of jet lag catch day and night. The pineal gland produces a number of biologically active substances which are involved in the regulation of immunity, and extinction of puberty (menopause), menstrual function, water-salt exchange processes pigmentation, aging, synchronization and waking sleep cycles. According to some, it is an adverse effect on the pineal gland, which have many environmental factors, is the basis of DS and meteopatii.

To prevent associated with a lack of lightdepressed state of mind, fatigue and other manifestations of autumn melancholy, hronoterapevty recommend 2-3-hour walks a day in daylight, albeit meager, light. In the absence of such a possibility (for example, during the working day), it is desirable to buy a special lamp for home phototherapy. Daily half-hour session under the light of a lamp that simulates bright sunlight, biorhythms adapts to a reduction in the light of the day and helps avoid seasonal mood recession or overcome it.

In the absence of sunlight the lampinclude a conventional bright electric light. Of course, the body is difficult to cheat: the electric light is different from the natural on spectral and phase composition, however, is not saving on a bright electric light, it can also reduce the severity of desihronoza or prevent its development of symptoms.

These scientific studies on the impactat different temperatures for biological processes, it showed that a change in temperature leads to the activation or alternatively, blocking of certain genes. These processes are the basis of changes in the genetically programmed rhythms.

The most sensitive to temperature fluctuationsvascular system, because it is through the constriction or dilation body carries out temperature regulation and maintains its constant temperature. Therefore, in violation of the regulation of these processes due to excessive spasm of blood vessels in the cold in people suffering from hypertension or hypotension, ischemic heart disease, you may experience headaches, pain in the heart, to register fluctuations in blood pressure. Heat can also significantly disrupt the normal flow of biological processes, resulting in lower blood pressure, dehydration, poor blood supply to many organs.

Train and synchronizes biorhythms propertyto changes in temperature conditions has tempering. The main principle of tempering procedures - air baths, wiping douches, contrast shower - in gradualness: You should start with the water temperature of 36-37 ° C, slowly (1-2 ° C per week) reducing the temperature to 12-14 ° C, or increasing the time air baths (3-5 minutes per week), the duration of the procedures leading up to 30-40 minutes. Moderate exercise, especially aerobic (oxygenated) such as: walking, swimming, biking, skiing - contribute to the training of vascular tone and reduce dependence on temperature changes.

Electromagnetic fluctuations caused by changesgeomagnetic background in response to increased solar activity, as well as the low-frequency sound waves, which occur during the passage of cyclones often cause failure of biorhythms, especially those that are close to them in frequency (usually - midrange jet lag). This so-called phenomenon of forced synchronization, which disturbs the normal course of biological processes and causes deterioration of health. This can be observed blood pressure drops, arrhythmias of the heart, difficulty breathing in chronic diseases of the respiratory system, etc.

It was found that fluctuations in the magnetic fieldEarth caught by receptors on the walls of the large blood vessels and lead to significant changes in the vascular system. During magnetic storms developed spasm of blood vessels, blood flow in small vessels slows, blood viscosity increases, increased tendency to form blood clots, worsening blood circulation of many vital organs, greatly increases the amount of stress hormones in the blood. Not for nothing in the days of magnetic storms, the number of heart attacks and stroke increases dramatically, sudden deaths. Moreover, electromagnetic fields negatively influence the epiphysis - one of the key regulators of human biological rhythms and synchronizers.

During magnetic storms, people exposed tometeopatii, as well as suffering from various chronic diseases should be possible to reduce physical and mental stress, sleep at night and during the day it is desirable to take a decoction of the roots of valerian or motherwort leaves. Do not eat in those days, heavy, trudnousvaivaemuyu food. Patients with diseases of the cardiovascular system is required to strictly comply with all medical recommendations, and receive all the prescribed drugs.

High humidity is very characteristicconditions of stay in the big city when the cyclone approached, usually accompanied by a sharp decrease in oxygen in the air. This significantly affects the well-being of patients with chronic diseases of the cardiovascular and respiratory systems. High humidity can not tolerate people with diseases of the musculoskeletal system. However, relatively healthy people may experience symptoms of oxygen deficiency (hypoxia): weakness, fatigue, mild lightheadedness. Strengthen the adverse effects of each other high humidity and temperature - in these circumstances significantly impeded heat transfer, which may cause heat stroke and other serious disorders in the body.

However, excessively dry air, characteristicour apartments throughout the entire heating season, can deliver a lot of trouble: because of the drying of the mucous membranes irritation occurs, reduced the protective properties of the mucous membranes, they become more susceptible to a variety of disease-causing agents. To avoid this, you need to use a humidifier. Modern air humidifiers can be successfully replaced and the usual utensils with water, placed in the room (though aesthetically it is not the best solution), water-soaked cotton cloth placed on the steam radiators. Wet cleaning, especially with the use of birch leaves, pine needles, sage, yarrow, not only moisturizes the air in the room, but also helps to improve it, get rid of harmful bacteria and viruses.

The influence of the wind and atmospheric pressure

Wind, associated with the movement of air masses,usually carries with it a change in the weather. Therefore, on windy days it is often observed decline in health of people with chronic diseases. It is also very sensitive to wind people with mental disorders who have windy weather can exacerbate feelings of anxiety, causeless melancholy, anxiety.