What is Reiter's syndrome

Many human diseases are associated with an infection, but not directly. A striking example - reactive arthritis (Reiter's syndrome).
joint infections there, it affects the genitourinary system or
gastrointestinal tract. However, it affects the joints. Infection
It appears a "trigger" that disrupts the immune
system, and it is the latest "attack" on the joints. Therefore, even
eliminating infections with antibiotics is not always helpful
get rid of the problems.

The term "reactive arthritis" (ie, joint inflammation,
which occurs as a reaction in response to an infection elsewhere) was
Anhovenom proposed in 1969. It is interesting that until recently
the disease was named after German physician Hans Reiter (which first
He described this combination of symptoms), but the latter was a supporter
Nazis and eugenics, participated in human experiments
concentration camps. So now the preference is given to the term is
"Reactive arthritis."

Reactive arthritis (Reiter's syndrome) - inflammatory
joint disease that develops after infection (no joint,
and in another part of the body). Infections caused by reactive development
arthritis usually affects the urinary tract or gastrointestinal
tract. 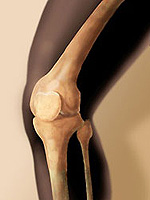 Reactive arthritis is not associated with the spread of infection by
the body and its release to the joint. It is believed that inflammation
joint develops due to the fact that the microorganisms contain substances
(Antigens), which are similar to antigens of the body's tissues. immune
system "confuses" the joint antigens and microorganisms, as a result of it
and microbe attacks and joint. The joint inflammation develops which
and it causes problems.

Reactive arthritis usually begins 2-4 weeks after
intestinal or venereal infection. The most common first symptom is
urethritis, conjunctivitis then developed, and the last - arthritis.
Approximately every fourth patient has skin changes
different appearance.

The symptoms of reactive arthritis is usually stored from three to
twelve months. In most cases, symptoms and conjunctivitis
urethritis expressed very poorly and only 1-2 inflamed joint. some
Patients, however, reactive arthritis can be acute and severe,
limit their physical activity.

Most often, reactive arthritis associated with microorganisms,
called chlamydia. Hladimii usually transmitted through sexual
contacts. Often the infection has no symptoms, but the most frequent
symptoms (if present) - pain or discomfort when
urination and discharge from the penis or vagina.

Reactive arthritis develops not all people after
Moved infection. The reasons for this are unclear selectivity. It is shown
disease that often develops in people who have a special gene - HLA B
27 (Al-Al-Be-A 27).

Simple and straightforward test that allows to establish the diagnosis
reactive arthritis does not exist yet. A doctor may suspect that
the diagnosis of the patient with proper questioning and examination and then
appoint a special study to confirm it.

If signs of active infection persist, then appointment is justified
antibiotics to eliminate bacteria and to remove the root cause of the inflammation.

Nonsteroidal anti-inflammatory drugs (such as ibuprofen,
diclofenac, indomethacin, etc.) reduces the pain and inflammation of the joints.

In severe inflammation of the joints sometimes perform injection in these glucocorticoids (anti-hormones).

With long-term preservation of joint pain appoint
anti-inflammatory drugs, which slow down the damage to the joint - sulfasalazine, methotrexate, and others.

During active inflammation joint should be protected from stress.
However, after his relief recommended a gradual recovery
physical activity.

How to get rid of cystitis? Traditional methods of treatment