Hypospadia is treated only by surgical. Sometimes this operation is simple, sometimes requires serious surgery efforts. Basically, it all depends on the type of hypospadia. Read more about the treatment of the disease, read in the article.


Tasks of the treatment of hypospadia 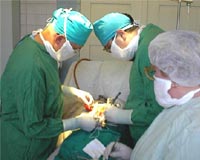 Surgical treatment of hypospadia is necessary to recreate the normal structure and function of the penis and is carried out in order for the boy, teenager and future man to feel absolutely normal both with aesthetic and an anatomical functional point of view. Speaking in a simpler language, sexual member after the hypospadia correction should have a normal appearance (shape, dimensions) both in a state of rest and in the state of the erection, and should also fully provide 2 function assigned to it - urination and sexual intercourse. At the same time, urination should be free and with adequate speed, without splashing the urine jet, which should be sent forward. Natural for a man is urination standing. In the state of erection, the penis must be direct, have an adequate length, the ejaculation through the outer hole of the urethra should result in seed entering the rear arch of the vagina. To achieve these goals, when correcting hypospadia, the following tasks are resolved:

The choice of methods for solving these tasks is set in the diagnostic process and is determined by the type of hypospadia (the location of the anomalous outer opening of the urethra), the size of the penis head, the degree of its curvature and some other factors.

During the trunk hypospadia, the urethra can eliminate with the skin taken with the dams of the flesh.

With more serious types of hypospadias, operations are carried out in several stages. Separately, a member is straightened, a urethra is formed separately.


Preparation for the operation and period after it

Any special preparation for the hypospagia correction operation, as a rule, is not required. If there is urinary tract infection, antibiotics are prescribed to eliminate it. In some cases, especially when hypospadia is combined with incomplete omission of eggs in the scrotum (cryptorchism), the course of treatment with hormones is appointed.

As a rule, long-term stay in the hospital after the operation is not required and the average hospitalization period usually does not exceed 2 - 3 days. After the operation in the urethra and bladder, a thin tube-catheter is installed, the urine of which is highlighted directly in diapers. Dressing after an operation of the correction of the head and distal stem hypospadia with a timely healing of tissues is usually not required, since a special bandage is superimposed on the penis, which is removed along with the catheter after 7-10 days after the operation. After the operations of the scrutinal and crotch hypospadia, 1 - 2 shifts of the dressings and the catheter in the urethra and the bladder are on average 14 days. In the postoperative period are prescribed with the prophylactic goal of small doses of antibiotics.

Hydrocel in children in questions and answers