Home›Endocrinology›Sugar diabetes: treatment is carried out for life

Sugar diabetes: treatment is carried out for life

Still a half thousand years BC The ancient Egyptians in his medical treatise "Papyrus Ebers" described diabetes as an independent disease. The great doctors of ancient Greece and Rome tirelessly reflect on this mysterious disease. So what is this disease?

Hello Arethais invented her the name "Diabetes" - in Greek "I proceed, pass through". Scientist Celsius argued that in the emergence of diabetes mellitus the indignant of the stomach was guilty, and the Great Hippocrat was diagnosed, trying the patient's urine to taste. 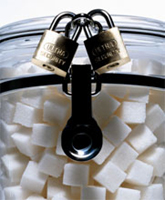 By the way, the ancient Chinese also knew that under diabetes mellitus it becomes sweet. They came up with an original diagnostic method with the help of flies (and OS). If the fly sits on a saucer with urine, then urine is sweet, and the patient is sick.

Sugar diabetes is a disease that is characterized by a high blood sugar content and the appearance of sugar in the urine. There are two types of diabetes.

From what happens diabetes? The development of type 1 diabetes is associated with a violation of the pancreas. It ceases to produce a hormone insulin - a substance regulating blood sugar level.

In diabetes mellitus, 2 types of insulin is produced, as it should be, but the cells of the body cease to perceive it.

To the question: "Why diabetes arises?"- Scientists have so far been answering. Also installed only one thing: diabetes can not be infected with contact with a sick person. 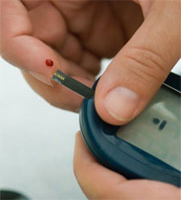 What's happening? As a result of insulin shortage, the body cannot use glucose, it accumulates blood. Excess glucose is removed with urine, which leads to frequent urination. Loss of fluid causes increased thirst and consumption of a large amount of water.

Sugar diabetes leads to a violation of carbohydrate metabolism, and therefore, all vital processes in the body suffer.

Rapid weight loss; dehydration of the body; increased fatigue; weakness; bad sleep; Itching skin. The diabetes mellitus of the first type is sometimes manifested by a sharp deterioration of the state, when pronounced weakness occurs, abdominal pain appears, vomiting, the smell of acetone from mouth. These are signs of approaching hyperglycemic coma. If it does not recognize it in time, the patient can lose consciousness and die.

The second type diabetes is usually developing gradually for a long time.

Sick diabetes patients must be registered with an endocrinologist's doctor.

The following studies perform for the diagnosis of diabetics:

Blood test on glucose (As a rule, blood is carried out from the finger): the elevated glucose content is determined (hyperglycemia).

Analysis must be handed over. Tolerance to glucose tolerance: On an empty stomach takes about 75 g of sugar (the exact number of the doctor prescribes), then the concentration of glucose in the blood is determined after 0.5, 2 and 6 hours. On the day of the sample, it is desirable not to smoke, do not worry, not 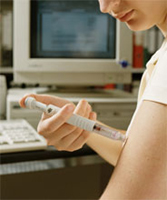 Determination of glycosylated hemoglobin (in venous blood) its number increases significantly in patients with diabetes.

Includes: Special diet - It is necessary to eliminate sugar, alcoholic beverages, syrups, pastries, cookies, grapes and dates. Food needs to be taken in small portions, better than 4-5 times a day. Recommended products containing various sugar substitutes (aspartame, saccharin, xylitis, sorbitol, fructose, etc.). Daily use of insulin (insulin therapy) - it is necessary to patients with diabetes of the first type. The drug is produced in special syringe knobs, with which it is easy to make injections.

In the treatment of insulin, it is necessary to independently control the level of glucose in the blood and urine (with the help of special strips).

From tablets that contribute to a decrease in blood sugar levels, as a rule, begin the treatment of a diabetes of second type. When progressing the disease, insulin is needed.

People suffering from diabetes mellitus, useful exercise. The healing role also has a decrease in weight in obesity patients.

Treatment of diabetes mellitus is carried out for life. Self-control and accurate implementation of the recommendations of the doctor make it possible to avoid or significantly slow down the development of the complications of the disease.