The location of the thyroid gland 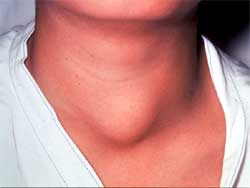 The thyroid gland is located on the front surface of the neck. Most people can see it or forgive. Thyroid gland has two stakes connected by a narrow cage. This iron absorbs iodine from food and blood and produces a hormone performing various functions. The thyroid gland contains mostly two types of cells:

Of these cells, various types of cancer arise, differing in the flow, treatment and outcome.

In the thyroid gland there are various tumors, while most of them (about 95%) - benign. Due to the fact that the thyroid gland is close to the skin, the tumor that has arisen in it has the appearance of the node on the neck. The nodes in the gland may appear at any age, are more often detected in adults who themselves detect the tumor.


Malignant tumors of the thyroid gland

Only 5-10% of the tumors of the thyroid gland belong to malignant. There are several types of thyroid cancer:

Papillary carcinoma is 80-85% of the total number of malignant tumors of the thyroid gland. The tumor grows very slowly and occurs, as a rule, in one share of the gland, however, 10-20% of patients the defeat happens to bilateral. Although this tumor grows slowly, but often affects the cervical lymph nodes. Fortunately, most people with papillary thyroid cancer recover.

Follicular carcinoma is the second frequency of a malignant tumor of the thyroid gland and is 5-10% of the number of all the neoplasms of the gland. It is more often detected in countries where there is a shortage of iodine in food. Usually, this type of cancer does not go beyond the thyroid gland, but sometimes it can be metastable in light and bones. In contrast to papillary carcinoma, follicular carcinomas are less likely to involve lymphatic nodes in the process. Forecast in patients with follicular carcinoma is the same or somewhat worse than in patients with papillary carcinoma.

Anaplastic carcinoma - Rare view of a malignant tumor of the thyroid gland. The tumor quickly amazes the structure of the neck and spreads through the body, leading to the death most often.


Medullar carcinoma of the thyroid gland - The only tumor arising from C-cells and is 5% of the total number of malignant neoplasms of the gland. May hit lymph nodes, lungs and liver before the detection of the primary hearth. This tumor produces a hormone calcitonin and a cancer-embryonic antigen, which can be detected in the patient's blood.

Thyroid lymphoma develops from lymphocytes - cells of the immune system, but it is very rare.

The prevalence of thyroid cancer in the world is low – near
1-2% of all cancer pathology. In the absence of radiation
effects of the occasion of the occasion of the thyroid cancer grows with
age. If children are extremely rare in children, then people over 60
In half cases, you can reveal the nodal forms of cancer. Chernobyl
The catastrophe showed that the irradiation of children, including intrauterine
irradiation, sharply increased the incidence of thyroid cancer.
The reason is that radioactive iodine accumulates in
thyroid gland, which in intrauterine development and in childhood
age many times more sensitive to irradiation. In adults
There is also a tendency, but significantly less pronounced, t.To. for
Tumor development requires significantly large doses and time for
manifestations of pathology. 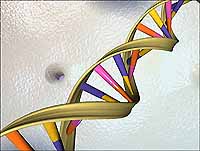 Great progress has been achieved in understanding how changes in human DNA can turn normal thyroid cells in malignant. DNA is a molecule carrying information on the activities of all organism cells. We are usually similar to our parents, as they are sources of our DNA. However, DNA affects not only our appearance. It also determines the risk of developing some diseases, including cancer.

People can inherit damaged DNA from parent. In many cases, human DNA is damaged as a result of environmental factors, such as smoking or radiation. Sometimes DNA mutations arise for unknown reasons.

DNA mutations that cause some forms of papillary thyroid cancer, involve certain parts of the RET oncogene. These mutations are purchased during life and less often inherit. They are present only in tumor cells and are not transmitted to the patient's children. The acquired changes in other oncogenes and tumor suppressing genes also play a role in the occurrence of papillary and follicular thyroid cancer.