What is gonorrhea? How do you get infected? What happens if gonorrhea is not treated? On this and many other details in the article.

Question №1. What is gonorrhea?

Gonorrhea - this venereal disease caused by the gonococcus (Neisseria gonorrhoeae). Gonokokk affects the mucous membrane of the urethra, rectum, throat, cervix and eyes.


Question №2. How do you get infected with gonorrhea?

Infection of the newborn during childbirth.

Domestic gonorrhea infection is virtually impossible. The fact that gonococci die very quickly in the environment. In addition, for infection it is necessary that the body has got a sufficiently large number of gonococci that when infecting domestic unrealistic.


Question №3. What is the incubation period of gonorrhea have?

From the moment of infection to the onset of the disease in men usually takes 2-5 days; women - 5-10 days.


Question №4. How does gonorrhea? 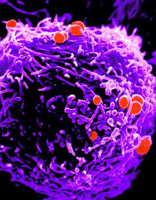 In men, there are selection (yellow-whitecolor) of the urethra, often in combination with pain on urination. The men are very rare asymptomatic gonorrhea (only 1-5% of cases).

In women, the following complaints (or theircombination) selection (yellowish-white) from the vagina, pain during urination, pain in the abdomen. Thus gonorrhea in women often occurs without symptoms (in 20-40% cases).

If gonococcal pharyngitis (throat lesion) can be a pain in the throat. However, in most cases it is asymptomatic.

Gonococcal pharyngitis and gonococcal proctitis occur both in men (mostly gay and bisexual), and women.


Question №5. What happens if gonorrhea is not treated?

Untreated gonorrhea becomes chronic. In this case the symptoms become less severe or no pass. Patients with chronic gonorrhea can infect their sexual partners.

Perhaps the development of the following complications:

Question №6. How is the diagnosis of gonorrhea?

Total smear is characterized by high accuracy only in acute gonorrhea in men.