We talk with the head of the medical parasitology department of the Center for Gossen Epidezor in Moscow Tatiana Ivanova. Our article discusses the main questions about malaria.

Question number 1. Is it true that Russia can replenish the list of regions where you can get infected with malaria? 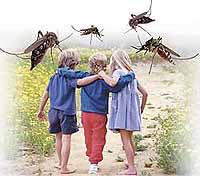 - In Russia last year was 642 cases. Of these - 214 in Moscow, and more than a hundred - in the Moscow region. Malaria was covered in Moscow and before. There were about 150-200 cases annually. But it was mostly a tropical malaria, which students from African countries and specialists who left there on business trips. But since the 1990s, many illegal migrants from Tajikistan and Azerbaijan appeared in Moscow and the region, where the epidemiological situation of malaria is constantly maintained. Illegals live in bad conditions, as a rule, do not have health insurance, official registration, so they do not pay a doctor in a timely manner.

And sickness carriers are mosquitoes. Fourth Summer in the Moscow region Pretty hot weather. All this creates favorable conditions for development in vegetation reservoirs. Komar will only populate those reservoirs where there is aquatic vegetation or household garbage. If the reservoir is clean, landscaped, nothing floats on the surface, there will be no mosquitoes. We have many reservoirs in a deplorable state.

Question # 2. But not every mosquito is infected with malaria?

- Komar crashes sterile. That's when the blood of a sick person goes, then he is dangerous. Once the average daily temperature reaches plus 16 degrees, the parasite begins to develop in the mosquito body. This year in Moscow it happened on July 6, in the past - June 21. From now on, the season of transmission of malaria has begun. With different types of malaria, a different incubation period: in tropical - up to a month, with a three-day - up to three years. Cases of three-day malaria with long-term incubation on average occur seven-nine months.

Already minutes after thirty after the bite of mosquito, parasites fall into the liver, and there is their primary development. At this moment, a person does not feel anything and does not know what is already sick. The liver increases in size, hepatic cells are dying. Then the parasite penetrates blood into the erythrocytes, the level of hemoglobin decreases. Anemia is coming. Heavy toxic changes in the body arise. First of all, the kidneys suffer. The cause of death from tropical malaria is first of all renal failure.

Question number 3. So, from the bite of a mosquito you can die?

- In Moscow - no. We have only three-day malaria.

Question number 4. And how many species it exists?

- Four. Tropical, two types of three-day and four-day (with three-day malaria attacks are in a day, with four days later - in two days). The four-day is now rare - this is the most ancient view of malaria with the most favorable flow. However, this malaria can be sick all life. Let's say, in childhood I got sick, and after 45 years - again the attack. So much time parasite lived in the blood. And with three-day malaria, he lives in the blood to the maximum of five years. But the most terrible type of malaria is tropical. This is the youngest type of malaria, which gives a fatal outcome. In the world annually up to 500 million people sick malaria. Of these, up to two million die. We have tropical malaria in Russia - our mosquitoes are unresponsible to her.

- If a diagnosis was diagnosed in a timely manner, the disease is treated successfully, but the effectiveness of treatment depends on the timely appeal to the doctor. It is impossible to wait until the next morning - time goes to hours. There are separate species - the malignant for tropical malaria, when treatment does not bring results. Treatment of three-day malaria takes at least 17 days. But no lifelong immunity arises. How many times it infected with malaria, so much and you will hurt.

Question number 6. How to protect yourself from malaria?

- Malaria is transmitted only through a mosquito, so you need to protect yourself from the bite of bloodsuckers: put the grids on the windows, use repellents, apply fumigators. Before departure to countries where diseases are constantly recorded, take antimalarial drugs a week before departure and throughout the trip (but not more than four months) and three more weeks after returning. In Africa, there is a group of countries where malaria has developed resistance to most drugs. In these countries, the highest risk of infection.

- Our people prefer from everything to be treated with vodka. They say that if in Africa to drink regularly, including the gin-tonic, then you will not get sick.

- On the contrary, on the day of reception drugs can not be taken alcohol - incompatible. True, in Gina with Tonic there is a chinine microdosis, but it does not give any effect. Here in 1998, tourists went to Kenya, in New Year's tour. 23 people got sick right away, and three died. Why did it happen? They, apparently, did not know anything about the situation in Kenya. Nobody warned them. And as prevention did not use drugs, but alcoholic beverages.

Question number 8. So what will be with mosquitoes? And why do you rest in Europe, there are no them, and we leave for the city - clouds?

- By order of mayor, each prefecture allocates money for landscaping and processing of water bodies. We examine and process them regularly, thereby reducing the number of infection. Here the other day I left the Botanical Garden, there - larvae. Why? Because a lot of vegetation on the water. Improvement of water bodies worth a big money. If we did nothing, the epidemic would have already been in Moscow.