The disease is based on a complex of disorders in the brain,
leading to the progressive death of nerve cells. With absence
Treatment The disease steadily progresses and leads to the destruction of all
mental functions.

Alzheimer's disease
develops gradually, gradually. The first manifestation of the disease
are memory violations and attention. New information is absorbed all
worse. Man becomes forgetful, scattered, current events in his
experiences are replaced by revival 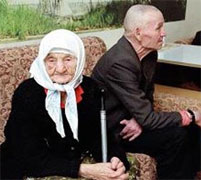 Anonya about the past.
How
The rule, already in the early stages of the disease, the orientation in
of time. Violates the idea of ​​the time sequence
events. In other cases, the disease begins with changes in nature
elderly man. It becomes rude, selfish, apathetic,
Erasing previous personality features. Finally, first
The manifestations of Alzheimer's disease can be nonsense or hallucinations, and
Also protracted depressions.

On the
An early stage of Alzheimer's disease patients rarely fall to the doctor,
Especially if there are no mental violations. Usually,
Relatives of the patient consider memory violations and changes
character as manifestations of natural aging.

At
Further progression of Alzheimer's disease Symptoms of dementia
become apparent. Violates orientation in time, space,
Environmental atmosphere. Patients do not know the date, month and year can
get lost in a familiar place, do not always understand where they are, not
recognize familiar and loved ones. Gradually violated orientation and in
Self person. Patients can not call their age, forget
Key facts of life. Often observed «Shift in the past»: they
consider themselves with children or young people, argue that they are long
Dead parents are alive.

IN
Currently, drugs are developed, the effectiveness of which in the treatment
Alzheimer's disease is confirmed by clinical trials.

Usage
these drugs makes it largely to delay the process
progression of illness, extend the life of patients, partly
Compensate already disturbed mental functions, improve processes
thinking and social functioning of patients and facilitate care for
Nimi. The effectiveness of treatment increases significantly when appointing
Preparations at the stage of initial or moderate dementia (dementia).


Important and the fact that therapy should go under constant medical control
with regular evaluation of the effectiveness and tolerance of drugs.

Indications to the system of intensive neurophysiological ...