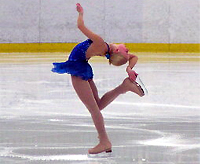 When in everyday life we ​​perform accurate movements, we do not think about what complex mechanisms in the central nervous system provide them. A person lives a full-fledged life, dancing, engaged in sports, can play football, skating - At the same time, the movement makes pleasure. Figure skating is the limit of the possibility of coordination of thoughts and movements.

To achieve success, a person through persistent workouts is achieved a high degree of development of nerve contacts in cells of various brain sites. At the same time, success in the development of these ties can be achieved only at a young age, when the nervous system has high neuroplasticity.

Neuroplasticity is the property of the nervous system to stop due to external influences or its own «internal» Activity, for example, during a series of repeated specific movements when playing musical instrument or sports. The neuroplasticity property underlies the ability of a person to memorize and reproducing. To formed the skill, as a rule, a series of repetitions of exposure is needed - it starts the processes leading to the central nervous system. As a result, new, or the old contacts are generated between the cells of the central nervous system. If the nervous tissue is affected, these contacts are not formed, and ataxia develops.

The coordination of movements in the human brain corresponds to many difficult ways interrelated structures to which, in particular, the various structures of the head and spinal cord, sensitive cells located in the muscles, bones and deep layers of the skin, as well as the nerves connecting them.

The cerebellum in a person is inside the skull in the rear cranial fossa, t.E. approximately at the level of the place where everyone without difficulty can determine the head. The cerebellum consists of two hemispheres, three pairs of legs, through which it is associated with other structures of the brain and the so-called worm.

Hemisphere is more responsible for accurate and harmonious movements in the limbs, and the worm is for maintaining posture and equilibrium. With a self-tension of certain muscle groups during the execution of a focused movement or maintaining the poses, the cerebellum receives nerve impulses from the part of the cerebral cortex, which is responsible for movement, as well as muscles and tendons. About them «analyzes» And issues its «answer», which is directed both in the brain and to the body. Thus, coordination movements. The whole system as a whole «sets up» the work of the muscles so that it becomes a clear, harmonious, beautiful - like the skaters.

Term «ataxia» literally meaning «mess», «confusion», «confusion», «confusion»; In this meaning, it was used since the time of the hippocrates over a very long time. Actually, ataxia is a violation of the one-time coordinated work of all muscle groups, which is most often developing due to violation of the coordination of movements by the nervous system. At the same time, any link of this complex system can fall out, depending on which the ataxia is divided into various types.

What you need to know about spinal ...