Finding into the stomach, food is mixed with gastric juice, which is produced by the inner layer of the stomach (mucous membrane). So begins the process of digestion. Most cases of stomach cancer occurs in the mucous membrane. As the tumor is germinated in deeper stomach layers, the disease prediction deteriorates.

Stomach cancer can spread in various ways. It can germinate the wall of the stomach and hit near the organs or affect lymph nodes and spread through the lymphatic system. If the cancer applies, the forecast becomes worse.

As cancer spread, tumor cells through the bloodstream fall into the liver, lungs and bones. With this prevalence of the stomach cancer, he is already impossible to heal it.

Most of the types of stomach cancer are called adenocarcin.

But other tumors may occur in the stomach:

Food. The increased risk of stomach cancer is noted in people who use a large number of smoked products, salt fish and meat, pickled vegetables and some types of food rich in starch and poor fiber. On the other hand, the use of coarse grain products, fresh vegetables and fruits containing provitamins A and vitamin C reduces the risk of gastric cancer. 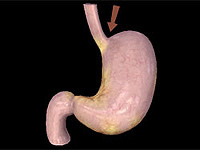 Tobacco and alcohol consumption. Smoking doubles the risk of stomach cancer. The connection between alcohol use and stomach cancer is definitely not installed.

Previously transferred stomach operations. Stomach cancer more often occurs in those who have suffered a partial removal of the stomach about other diseases, for example, ulcers.

Floor. The gastric cancer is twice as much more often in men compared to women.

Age. After 50 years, there is a sharp increase in the frequency of the stomach cancer.

Blood type. For unknown reasons, people with a group of blood and (ii) have an increased risk of developing a stomach cancer.

Family Anamnesis Cancer Stomach. People who have several close relatives suffered a gastric cancer, have an increased risk of developing the same tumor.

Polyps of stomach. Polyps are mushroom formations emanating from the gastric mucosa. Most of the types of such polyps are not accompanied by an increased risk of stomach cancer, but some types of polyps can sometimes turn into cancer.

Location. The place of your stay can be of great importance. Japanese living in Japan have a very high risk of stomach cancer. If they are moving to the United States, in a few years the risk decreases, but still remains higher compared to people born in the US. It is assumed that the impact of adverse factors in the early period of life, has an impact on the high risk of gastric cancer in Japan. It is also not known whether only the nature of food affects this risk.

Patients with stomach cancer rarely appear symptoms in the early stages of the disease. For this reason, the gastric cancer is difficult to diagnose in a timely manner.

Symptoms of stomach cancer can be as follows:

Of course, many of these symptoms can be caused by other diseases, and not cancer. However, if these symptoms arose and they continue for a long period of time, it is necessary to urgently consult a doctor, especially if you have for 50 years and you have the risk factors for the development of gastric cancer.


What to do with the stomach cancer suspected?

If you have a reason to suspect a gastric cancer, then you need to immediately consult a doctor who, talking to you, will hold the necessary examination. The doctor examines the stomach and check if there is a tumor there. In addition, it will determine whether the liver is not increased, which may mean its defeat with the tumor process.

Endoscopy stomach. With this procedure, after anesthesia, a thin flexible tube with an illuminator (endoscope) is introduced through the mouth and the doctor examines the esophagus, the stomach and the initial portion of the small intestine (12 pans). In the presence of a suspicious area, a small piece of the stomach mucosa (biopsy) is taken for microscopic examination.

Contrast study of the gastrointestinal tract. The patient is given a barray, which covers the mucous membrane of the esophagus, the stomach and the initial portion of the small intestine and several radiographs are performed. After that, if there is an indication, it is introduced through the air tube in the stomach so that the barium spread over the mucous membrane of the thin layer. This technique makes it possible to detect even very minor changes in the stomach.

Ultrasound Research (Ultrasound). At the same time, the method uses sound waves to determine the state of the internal organs. Ultrasound is sometimes carried out in combination with the introduction of a special probe through the nose or mouth in the stomach, which makes it possible to estimate the prevalence of the tumor inside the stomach and in the surrounding fabrics and lymph nodes.

Computed tomography (CT). In this method, a special X-ray technique is used, which gives the ability to take pictures at different angles. This obtains detailed information about the organs and tissues. It turns out how common stomach cancer and which organs (for example, liver) are amazed. With this method, you can perform aiming biopsy of a suspicious area with a subsequent study.

Positron-emission tomography (PET). Radioactive glucose is introduced into the Vienna of the patient. It concentrates in the tumor, and the scanner detects the zones of its accumulation. The method allows you to figure out the spread of cancer beyond the stomach and clarify the stage of the disease.

Magnetic resonance Tomography (MRI). This method, like CT, allows you to explore the organism in layers, but at the same time powerful magnets are used instead of radiation.

Radiography of the chest makes it possible to identify the damage to the lungs with the tumor process.

Laboratory research. A complete blood test is carried out to identify anemia (Malokrovia), and also examines the feces for hidden blood.


Is it possible to prevent the gastric cancer?

Despite the fact that we do not know the exact cause of the occurrence of the stomach cancer, however, many cases of this disease can be prevented. Food freezing, instead of salting, marinations and smoking, as well as a change in the nature of nutrition, helped reduce the frequency of the stomach cancer in the past 60 years.

Tobacco and alcohol can increase the risk of gastric cancer. We recommend limiting the use of alcoholic beverages or refuse them at all. If you do not smoke, then do not start. In case you are already smoking, try to quit this destructive habit.

Currently, it is not yet clear whether to treat a chronic infection caused by the Helicobacter Pylori bacterium in order to prevent the stomach cancer. Studies in this area continue.

The side effects of radiation therapy