Most often, being on freedom, the former prisoner feels completely unnecessary. Nowhere to go, no work. The result is another crime and a new conclusion. In Krasnokamsk, found a way out of the situation. About the successful problem solving, read in the article.


The crime rate in Krasnokamsk has always been higher than the average on the edge: 500 crimes per 10 thousand inhabitants, while in the region - 360. But thanks to the experiment, criminal statistics went on.


Find a job is the main thing 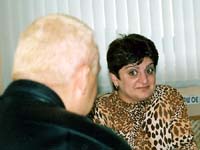 Former criminals transferred to Pravagi psychologists and social workers. They help recent prisoners to find a job, Simply put - adapt to everyday life life at liberty. With such support, the former criminals will not need to break the law again.

Parents Alexander Ivanov (name and surname changed) from Krasnokamsk killed when he was 13 years old. Soon the older brother of the boy was in prison, having managed to sell the parent apartment. The teenager remained on the street and, the rumor, began to steal. As a result, it was also behind bars, however, for a short time. Out of freedom, Alexander decided to find work. But without registration at the place of residence, the young man could not even register in the employment service.

Then the fate of Alexander and the specialists of the maintenance service were engaged in: a security guard in the garden cooperative was found, because a more prestigious guy's position was not worth counting on. Today, Alexander Ivanov is working safely by a loader on a vegetable base. Every week, his employers call from the support service for the former prisoners and ask by anyone by Alexander not to dismiss, despite possible abbreviations in the organization. Such examples with the desired fate of the former prisoners in the Krasnokamsk maintenance service are ready to bring many.


Prepare Sani in the summer

Specialists of the support service start their work for six months before convicted will be released. He is offered to fill in a special questionnaire, where the prisoner indicates, for example, what kind of education he has and is it at all. And so far «Ships» deadline, social workers are already looking for him. If work on a suitable vacancy is too badly paid (earnings below the subsistence minimum, less than six thousand rubles), the missing amount will pay extraction to the prisoner. Officials are confident that such support for people liberated from prison will lead to a decrease in crime.

Cases are known: Returning home from the places of imprisonment, a person discovered that strangers live in his house. The owner was not even let the threshold. As a result of such problems, a third of the former prisoners for six months after liberation again goes to a crime.

Today, specialists of the Support Service: Psychologists, Sociologists, Lawyers work with each prison. They help to arrange the necessary documents, collect references and even pass medical examinations - many prisoners have health problems. As a result, only four former prisoners were in prison. But the number of recurrent crimes has decreased markedly.

Safety project involves the prevention of juvenile crimes. Teenage «from the street» Trying to take the case - find it for them to work part-time or offered to sign up for sports sections. During the experiment, the number of children engaged in sports increased in two times. And the crime level decreased noticeably.