What is obstructive bronchitis

Obstructive bronchitis is a kind of acute bronchitis. Obstructive bronchitis is more commonly caused by paragripping virus, respiratory syncitial virus, rhinovirus, adenoviruses, less often with influenza virus and pneumonia,
Viral Bacterial Associations. Leading sign
Diseases is obstruction (narrowing of bronchial lumen) respiratory tract, developing
mainly under the influence of ORVI. Violation of bronchial passability
due to the presence of inflammatory swelling and edema mucous
shell, thickening it, hyperproduction by the secrets by the glands, accumulation in
Suitable on the wall of the mucous bronchi. Together with
that is possible a short-term weakly pronounced reflex spasm
Smooth muscles bronchi due to irritation of the mucous
Shell.


Passage through the narrowed areas of the respiratory tract
air that meets resistance to his current, especially in exhalation,
leads to the appearance of turbulence jet turbulent movement,
As a result, it is formed «whistling exhalation»,
Hearing at a distance.

Symptoms and diagnostics of obstructive bronchitis 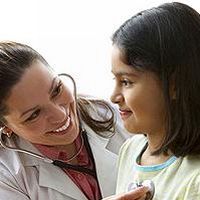 The main signs of the disease are
Noisy hindered, accompanied by expiratory (exhaled) whistle,
Participation in the act of breathing auxiliary muscles. Temperature
Subfebrile (37-37.5), up to high digits are not typical. Dry cough or
wet, frequent, resistant, mostly at night. Dyspnea wears expiratory character (embarrassing). Young children are exhaled loud,
hindered. In severe cases, there is an expansion of the chest in
front-top. In the lungs determine the box
Tint of sound, also listened to dry whistling and solubular
Wet whears at a high length. Physical data differ
Big lability. The nature of wheezing is largely changing
After coughing. Dry whistling wheems can
Felt palpatorially or be heard at a distance. Choosing or
The feeling of air deficiency in children does not occur.
Duration of the disease is 7-10 days, and with a protracted flow - 2-3
week.


To detect the pathogen, conduct special
Research: Virological - Immunofluorescence Method with
imprints from the mucous membrane of the nose; Serological - by increasing
antibody titer in paired serum; Bacteriological - use
For sowing smears from the mucous membrane of the larynx (material fence
possible through the catheter). In the blood is found to leukopenia (Reducing the number of leukocytes in the blood), Leukocytic formula shift, lymphoprodium (Reducing the number of lymphocytes in blood).

Radiographs detect on the radiograph
Increased transparency of the lungs, shadows of bronchi and narrow vessels and separated
Friend from each other. In some cases, there are widespread
Symmetrical strengthening of the root broncho-vascular drawing,
Taste.


To distinguish obstructive bronchitis from bronchial asthma
It is necessary to clarify the family allergic heredity of the child
(Anomalies Constitution - Diaathese; Atonic Allergy - Food,
Medica and T. D.). In early age in children for the first time
arising spastic syndrome without anamnestic data happens
It's hard to put the correct diagnosis. Should be taken into account that bronchospasm in
the development of obstructive bronchitis is not leading and is transparent, not accompanied by eosinophilia (An increase in the number of eosinophils in the blood) and, as a rule, not repeated later. For bronchial asthma is typical
repeated episodes of bronchospasm and choking (sometimes even without laying
ORVI). Makes clarity to also dispensary observation
such children.

Shown
Vitaminotherapy (acid ascorbic, pyridoxine, calcium pangamate,
Cocarboxylase) in age dosages. Sulfanimide funds I
Antibiotics are recommended for severe flow and in children of early
age when impossible to exclude bacterial pneumonia.
Also used Bactach - Children from 2 to T 2 Tablets (Baby) 2
times a day; from 5-12 years - 4 tabs 1-2 times a day. Course of treatment 5-10
Days. For young children use Bactrim suspension. With a prophylactic goal for preventing complications of antibiotics and sulfonamide products do not apply.