What is the disease kienbock

What is the disease kienbock? What are the symptoms Kienbock's disease? How is the diagnosis and treatment of disease? The answers to these questions can be found in the article.

In operation, a voltage associated with the upperlimbs, and especially to the load on the area of ​​the wrist joint, pathological changes may develop in the lunate carpal bones. This is due to the peculiarities of its anatomical location: it occupies a central place in the wrist, capitate bone located between the wrist and radius, and so more than any other during exercise is subject to mechanical stress. The disease develops gradually and occurs most often in cutters, obrubschikov, drifters, carpenters, fitters, crane operators, can also occur in other specialties workers.

As a result of constant tissue micro-traumasdevelop partial or total disruption of the blood supply to the affected area of ​​bone tissue with the appearance of small hemorrhages, causing broken bones and the power comes its partial resorption, ie resorption (bone loses minerals and trace elements that give it strength, primarily phosphorus and calcium salts). By continuing professional load or increase its repeated, although small, soft tissue damage leads to the defeat of the periosteum, cartilage and bone fracture edge. All this creates conditions for the development of subchondral aseptic (ie subperiosteal) focal necrosis of lunate bone, which leads to its disintegration into separate elements (for fragmentation), and then to collapse. bone form at the same time changes. A role in the occurrence of this disease have consecutive minor injuries, which contribute to the emergence of intraosseous fractures. In the future, subject to continued physical activity on the bone area of ​​the pathological process becomes more pronounced, leading to the formation of a compression fracture and deformation of bones. 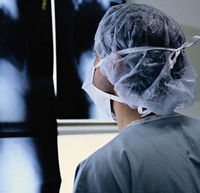 The disease is characterized by a gradual andfairly slow development and long over. Symptoms of this disease is quite peculiar. Initially, pain aching, pulling character in the wrist joint, worse during or after it. After a few months, sometimes a year, in the area of ​​the wrist joint swelling detected. At work from the normal muscle tension, thrust or movement of a recurrence of pain with the appearance of swelling on the back of the wrist. However, all the effects disappear as soon as the work stops loading arm. In the future recurrence of pain in the wrist area reappears on the condition continue. Movement in the joint becoming more limited and painful. Pressing on the projection area lunate bone quite painful.

In severe cases observed symptomFinsterer: when compressing the hand into a fist head of the III-rd metacarpal bone is at the same level as the heads allied II-nd and IV-th metacarpal bone, and not rising above them, as is the case in normal.

In the following cases, in advanced disease may develop atrophy of the muscles of the forearm from a standstill, in which there is a decrease in muscle mass and decreased muscle strength.

The diagnosis is crucialX-ray examination. In the early stages of the disease on radiographs, a change in the structural drawing lunate bone: the shadow it becomes more intense as compared to the shade of adjacent carpal bones.

Later it determined radiographicallydeformation, flattening along the longitudinal axis and the shortening in diameter. bone contour irregularities; in the center of enlightenment defined areas, which correspond to areas of bone resorption. Often marked narrowing of the joint space as a manifestation of non-specific inflammation in the joint space and the phenomenon of deforming osteoarthritis.

Prolonged immobilization - the imposition of a circularplaster bandage on the wrist area for up to 1 month, procaine blockade, mud, paraffin, hydrogen sulfide baths. Surgical treatment (curettage of necrotic masses, excision of the affected bone) are not always effective.