You got a breakdown under crown? The development of caries under the crown is not uncommon. But why, despite the treatment, the disease could not be defeated? Errors in the treatment of caries are found, but most often the causes of destructive processes become errors of prosthetic teeth. 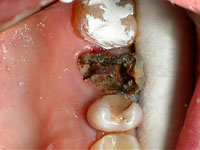 No matter how sad, despite the careful oral hygiene, most of us by 30 years already have experience in communicating with dentists. Many have repeatedly treated their teeth and now face the problem of saving them. If the caries inside the tooth «raised» not for a joke, sealing and subsequent restoration by composite materials is not enough. In this case, usually resort to prosthetics with crowns. However, sometimes, even being protected, the tooth begins to hurt again. Caries under crown is not uncommon, but why, despite the treatment, the disease continues to develop? Let's try to figure it out.

Before, before covering the tooth with a crown, his depugt was, that is, removed everything «inside», who could cause the development of caries inside the tooth and cause the appearance of pain syndrome. With the development of medical science and improving the technique of prosthetics, the crowns are installed on live teeth. To mount elegant prostheses need to cure and grasp the tooth, remove the thin layer of enamel and dentin. The pulp is not injured and remains viable, a lively tooth continues to receive nerve impulses, and for a long time he serves her «owner».

In the first days after the installation of the prosthesis, a lively tooth reacts to the crown of stupid pain, then the dental nerve «hide» deeper and the pain passes without a trace. However, if the tooth does not stop root or begins to hurt after a while after prosthetics, the reason may be an error in the treatment of caries.

Caries inside a prosthetic tooth

Sometimes the progressive caries becomes the cause of pain in the tooth under the crown. The development of the pathological process leads to a pulpit, inflammation of the vascular-nerve tooth beam, the development of root caries and periodontitis. In the acute course of caries, the dental pain bears a pulsating, a pronounced character and makes patients contact the doctor. The sluggish caries and periodontitis can exist for a long time, pain not so strong, but the result of the disease is often the loss of units of dentition.

The development of caries under crown — Certificate of the error of the dentist, with the treatment of caries, special detectors were not used, allowing to identify and remove the affected fabrics, thereby preventing further destruction of the tooth.

Errors in the treatment of teeth

Sometimes the cause of dental diseases after prosthetic crowns become hidden teeth diseases. And the point is not in the low qualification of the dentist, but in the fact that some pathological processes are found difficult not only by an experimental eye, but also using X-rays.

Gum diseases, periodontal disease in the initial stage may not be detected, caused by them periodontitis becomes the cause of root caries and dental pain. Pain occurs with thermal and chemical irritation of teeth, during chewing and dense closure of jaws. There is a feeling that the prosthetic tooth has grown, although even recently the crown did not interfere, did not cause any discomfort.

Non-quality crown — Cause of caries inside tooth

Violation of the integrity of the prosthesis in the absence of proper quality leads to a meal of food and cariesened bacteria under it, which causes the development of caries under the covering tooth crown.

The use of poor quality cement when fixing the crown, its gradual destruction and leaching opens the path to the microbes to the naked tooth tissues, hidden under the prosthesis. Especially often, such a phenomenon is observed after the installation of stamped, loosely adjacent metal crowns.

Poor-quality, high, unadapted to the shaped of the dentition of the crown — Cause of high load on the tooth fabric and the development factor of periodontitis and dental pain.

Error of the oral hygiene, cervical and root caries

Violation of the rules of oral hygiene, a consequence of a cluster of a dental plaque, the formation of a tooth stone near the necks of the teeth creates conditions for the development of root and cereal caries.

Pain in the tooth under the crown should alert, become a reason for an extraordinary visit to the doctor. Only timely dental assistance in many cases can prevent the development of the disease and the loss of tooth.