What is gas gangrene

Gas gangrene is a formidable complication of open damage to the musculoskeletal system.

Gas gangrene pathifiers - anaerobic
Microbes that are permanent in the intestine of home herbivores.
Can fire from the skin and from the feces of practically healthy faces.
Nutrient medium serve dead muscles and other fabrics located
in the wound. The reproduction of microbes occurs in oxygen-free medium.
Most anaerobic microbes in the process of vital activity forms
gas. Anaerobic infection tends to quick distribution,
causes pronounced general intoxication of the body. Entrance gate
Infections are most often traumatic extremities,
Insulated wounds, much less often - foreign bodies, injuries to thick
intestine. Even a small wound may be complicated by anaerobic infection.
Anaerobic gangrene develops during the first day from
Injuries, less often - later.

What are the symptoms of gas gangrene 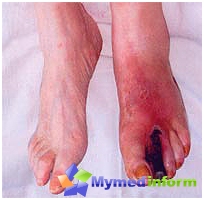 Patients with gas gangrene complain of driving pain in
wound. Appears rapidly increasing edema extremities. Unlike
Banal suppuration is not redness around the wound, on the contrary, skin
The covers of limbs are pale with a blue tint, often with bronze stains. When feeling the limb, the crunch of gas is determined
(Capital) in subcutaneous tissue. Capital is well determined when
Listening to the phonenadoscope. There is a pronounced intoxication:
the affected cheating or, on the contrary, dares to bed and complains
severe pain in the wound region; Pulse frequent; Language is dry, covered,
RVOT is possible. In the absence of treatment, intoxication is rapidly increasing,
The victim flows into the unconscious state, and within 2-3 days with
Moment injury can death.

Although gas gangrene in peaceful conditions is found
Rarely, it always needs to be remembered with any injuries as limbs,
So torso.

Most likely the development of gas gangrene during transport and
shaft injuries with localization of wounds in the hips, buttocks; in persons,
serving cattle, pigs, sheep. goats, especially if
The accident occurred in the place where animals are contained, and
The wound is polluted by manure.

Sharp pain in the wound area, the appearance of a pale rapidly increasing edema of the limb, gas attitudes, general intoxication is forced to suspect the gas gagranu.

Concludes
in maintaining cardiac activity and combating intoxication. Enter
Package preparations. With a delay in hospitalization you need
immediately proceed to the treatment of gas gangrene, because «Classical» Anaerobic infection leads to the overwhelming majority
wounded to death.

The main method of treating gas gangrene is surgical.

Hospitalization with gas gangrene in
purulent surgical department of the hospital, geographically most
close to the barocenter, since oxygenobarotherapy is one of
Goggle treatment methods. After transportation of the patient sanitary
Transportation is subject to disinfection, toolkit - soaking in
Disinfectant solution.