With a diagnosis of myoma, very many women are familiar. But not many know about such a small-acting method of treating the misa of the uterus, as embolization of the uterine arteries.


With a diagnosis of myoma, very many women are familiar. According to the Medical Statistics of Myoma, the uterus is found at each third woman over the age of 35 years, which makes it a disease most frequent in women in the core period. And there are unfortunate patients under the scalpel of the surgeon and cut the uterus from them, and often, together with the ovaries, causing them not only physical pain, but also inflicting severe psychological injury. American scientists interviewed several thousand women aged from 30 to 45 years old, for different reasons, the operational removal operation. Each fourth surveyed by the main unpleasant consequence of the operation considers psychological stress associated with the loss of the authority. Each fifth considers himself «defective» In sexy plan. Considering that the Mioma of the uterus is rapidly «young people», and even detects not to those who did not give birth to 30 years, the issues of developing and implementing medicine in the practice of new gentle organ-powdered methods of treatment are quite acute.

An essential shift in the problem of organo-breeding treatment of Moma in the world occurred in 1996., When American and British scientists as a result of joint research announced the emergence of a fundamentally new method of treatment capable of solving the problem of treating myoma of the uterus of any size, without deleting the uterus as an organ. This method was called — Embolization of uterine arteries.

Details about the embolization method of the uterine arteries

This method arose due to the development of a new direction in surgery — X-rayendovascular surgery. X-rayEndovascular surgeon — The doctor who is capable of using special catheter tubes on the vessels of the human body to get to any organ of the human body, including the uterus. Promotion of the catheter on the vessel is controlled by X-ray television equipment. The introduction of a catheter in the vessel is carried out using a single injection of the artery in the field of groin under local anesthesia, t.E. There are no scars on the body. All further manipulations with the catheter inside the vessel are painless, so the operation does not require common anesthesia. The principle of the embolization of the uterine arteries is to get to the vessels that participate in the blood supply to Moma and with the help of special, small balls-embossing, «Polish» These vessels. Embols are introduced into a vessel through the clearance of catheter. Lained nutrition, «Bescane» Momoma ceases to grow and decreases in the amount of. Subsequently, the Moma nodes turn into scars on the uterus, which are later dissolved.

What is Emboli? What they are made? Can they go except the uterus somewhere else? 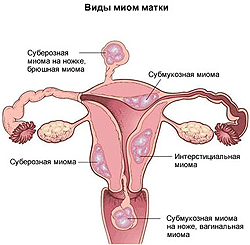 Emboli — These are sterile, fine particles of 400 to 1000 microns, made from medical polyurethane foam. Before entering the artery, they are divorced by saline. The resulting suspension from the embolith and physiological solution with the help of a syringe is introduced into the catheter and from there falls into the uterine artery. If the catheter is properly installed in the uterine artery, the embols will only fall into the uterus and nowhere. Embols with blood flow are entered to vessels in the uterus, which correspond to them in diameter, where they are stuck finally, overlapping the blood flow to the Mioma. In the future, blood clot with embols is formed in the vessel, the vessel comes with a connective tissue, turns into heavy, with «Purchased» in it embroids.

How long does the operation last? Need anesthesia?

Accuming is quite a great experience of embolization, figuratively speaking «Putting a hand», Doctors this operation is performed for 30–40 minutes. Earlier to get into the right and left uterine artery, it was necessary to prick the artery on the hip on the right and left. Now we have learned to perform embolization only through the puncture of only one artery. Operation does not require general anesthesia, t.To. Inside vessels there are no pain nerve endings and catheter manipulation inside vessels are painless. Local leather anesthesia is carried out at the artery puncture. Additionally, anesthesiologist does «soothing».

How long do you need to be in the hospital after surgery?

In the postoperative period in the uterus there is an inflammatory response that manifests the form of moderate pain in the region of the uterus, increasing the temperature. Pain, as a rule, does not require the appointment of narcotic anesthetics. However, with the aim of the prevention of infectious complications, antibiotic therapy is carried out, anti-inflammatory and light painkillers are prescribed for 3-5 days.

How quickly decreases myoma and uterus in size?

Naturally, the process «Drying» Fibromatous nodes and uterus can not be instantaneous. How slowly myomas grew, as slowly it will decrease. We see our patients together with gynecologists throughout the year. After 1.3.6.12 months after embolization, an ultrasound study is performed, with which it is determined, how many nodes and uterus decreased. As a rule, during the month, the volume of the uterus decreases by 10-20%, within 3-6 months to 30-50% of the initial.

When you can do embolization? Are there any contraindications? What a preoperative preparation?

Since the operation is performed with minimal impact on the body, almost without cuts and does not require general anesthesia, it has a small number of contraindications. Operation is contraindicated in allergies to iodide drugs, which is extremely rare, during pregnancy and in the presence of sharp inflammatory processes in the uterus and other organs. Embolization is performed in the sizes of the uterus with nodes more than 7-8 weeks (these sizes are determined according to ultrasound examination). With smaller sizes of uterine, the uterine artery is still very small and to get into them the catheter is problematic. Uterus with a large size can be embolized without problems. We have uterus emblem experience up to 28 weeks. Preoperative preparation Minimal: to be an empty stomach on the day of operation and shave the scope of the groin at the point of puncture.

There is experience more than 500 interventions in the uterine arteries. In 500 patients with sizes of the uterus, 6-28 weeks have been successful embolization. For 6-12 months after embolization, a reliable decrease in the size of the uterine is marked by 43% and fibromatous nodes to 58% according to ultrasound.

Is it possible to get pregnant and give birth after embolization?

One of the main advantages of embolization is that after embolization for a woman, a chance of pregnancy and childbirth remains. This is confirmed by both foreign data and their own observations.

What complaints are in women with uterine?

The most frequent symptom of myoma uterus is uterine bleeding. As a rule, women note that their monthly, they become longer and more abundant than before. Sometimes such bleeding are so heavy that they can lead to the anemia. In the period between menstruation of bleeding, as a rule, there is no, but when the uterine is large, bleeding may occur and the intermenstrual period. The second important feature of the Moma of the uterus is pain in the field of the lower back and pelvis. These pains are due to the pressure of an increased uterus on the organs and fabrics surrounding it. Sometimes a woman notes that she has frequent a call for urination, which makes it, for example, get up to the toilet in the middle of the night. This is due to the pressure of an enlarged uterus on the bladder, not allowing him to fully fill. Fully large uterus can put pressure on the rectum, being the cause of the development of constipation.

How can you determine if you have uterine myoma?

In time to diagnose myoma uterus currently does not represent much work. Absolutely accurate, inexpensive and painless method is an ultrasound study of a small pelvic organs. Ultrasound is able to recognize in the uterus fibromatous node with dimensions of about 1-2 cm. And ultrasound devices are now in almost all district clinics.

What to do if the diagnosis is delivered?

If you diagnosed with uterine misa, you must first consult and register to the gynecologist. Mioma uterus requires first of all close observation. About two, three times a year to undergo an ultrasound examination in order to make sure that or the absence of tumor growth. As a rule, doctors compare the increase in the size of the uterus due to the growth of the uterine sizes during pregnancy. So often to the question «What my mom is?», You can hear in response — «5, 7, 10 or 14 weeks». What does this mean? This means that the sizes of your uterus with the Moma correspond to the size of the uterus at a certain week of pregnancy. If the dimensions of the uterus exceeded 9-10 weekly barriers, the question of the surgical treatment of myoma arises. If myomas are accompanied by bleeding, the question of surgical treatment may occur earlier.

Thus, by comparing the surgery of the uterine arteries with an operation to remove the uterus, it is possible to highlight its main advantages:

The purpose of this article is not easy to familiarize readers, but first of all readers with the fact of the existence of such surgical interventions. The fact is that such operations since 1998 are carried out in Kiev's medical institutions, and since 2000 and in a number of regional centers of Ukraine. The results of the execution are as impressive as abroad. However, most people simply do not know that such operations exist at all. Poor awareness among the population and among doctors-gynecologists about introducing new advanced technologies to the medical practice of new advanced technologies is depriving the patients with the right of choice, forcing them to be treated according to the old, albeit the recipe time. Patients have the right to know about the existence of new medical technologies, alternative to traditional methods and be able to solve what methods to be treated today.