Equipment of a medical aid kit - always a responsible event, especially when it concerns the child. What you need to include in the children's first aid kits? 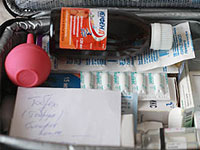 Children's first aid kit is needed in every home where there is a child. Medicines from intestinal colic, on temperature, from allergies and other misfortunes should always be at hand, so that in the case of which it does not run at night in the pharmacy and do not cause ambulance on trifles. What can we talk about traveling with a child to the cottage or on rest in hot countries to the sea. In this case, the configuration of a medical aid kit becomes a responsible event, all possible «emergency» situations should be provided in advance. The names of drugs in someone else's country may differ, and many drugs cannot be purchased without a doctor's prescription.

When changing the climate, children are often cold, it is usually a banal viral infection that does not require the use of antibiotics, so it is enough to have an antipyretic drug that will allow to keep the body temperature under control.

Pediatricians are unanimous in the opinion that the best antipyretic drugs for children are preparations containing paracetamol or other non-steroidal anti-inflammatory.

Considering that acclimatization requires a certain system of immunity, a virus infection in a child may leak harder. To quickly cope with your victim and do not spoil holidays, pediatricians are recommended when a medical aid kit for a child must include an antiviral drug in it, for example Viferon in Candle, Anaferon, Amizon and others.

Washing with a runny nose will help the remedy for washing the nose of Sanamarine and vasoconducting drops in Nasivin nose. Remember that during the flight by plane, the baby's nose must breathe well, otherwise it is possible that viral infection will cause otitis.

Sick throat and superficial dry cough, accompanying pharyngitis and laryngitis, treat rinses of the throat with chlorophyllipte, inhalipt, Rotokan. In the case of tracheitis and bronchitis, expectorant drugs are needed, such as Mukaltin in pills or chest collection in bags.

If the ears got sick, can not do without drops, an anaureron or otipax can be included in the children's first aid kit. They contain lidocaine, except for anti-inflammatory effects have a pronounced anesthetic effect.

Have antiallergic drugs with themselves even if the child is not predisposed to allergies. Allergic reactions are unpredictable, especially in someone else's country, with «strangers» Food, Flora and Fauna. For children, it is better to choose anti-allergic drugs of a new generation that do not possess the sleeping effect, acting quickly and gently, for example, Phenistil, Kestin, Zirtek, Loratadine, Claritin, Fencorol. notice, that «old» and tested Tueva and Supratin act quickly, although from them and clone in sleep. 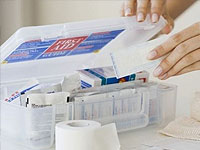 Nausea, vomiting, diarrhea often arise in children. The reason for the disorder can be poorly purified water, unwashed fruits and vegetables, dirty hands. In such a situation, it is important to understand that for a child, the danger is even not the microbes that got inside, but dehydration, the cause of which is the loss of fluid with vomiting and diarrhea.

Children's first aid kit must include activated carbon, polyphs, smacks, enterosgel or other adsorbents. They will help get rid of toxins and microbes that penetrated the body. You can fill the loss of fluid in conventional salt and sugar solution (1 teaspoon on a glass of water) or special preparations selling in pharmacies, for example, recider.

Without it, there is no life of a single little fidget. When configuring a medical aid kit for a child, it is recommended to put an antiseptic for processing wounds, sterile wool, bandage and leucoplasty. Rinse a cut or bruised wound can be conventional water, a weak solution of hydrogen peroxide or chlorhexidine, edges of the wound are processed «Zelenkaya» or «iodom».

All of the above recommendations for the configuration of a medical aid kit for a child are common. In each case, the first-aid kit must be replenished with specific drugs, depending on the health status of the kid.

We wish you a pleasant stay!