Systemic Vasculites (SV) - a group of diseases characterized by inflammation of the walls of vascular vessels of various caliber with gradual involvement in the pathological process of organs and tissues of the zone of vascular damage. Children meet: Shenlein-Genochi disease, Cavasaki's mucolic-leather-lemonoforming syndrome, nodule polyarteritic, nonspecific aortoarterite, as well as vegetarian granulomatosis, eosinophilic granulomatous angiitis (Charg-Strauss syndrome) and Behaethe syndrome. The first four of the listed diseases are observed mainly in children or have distinctive features from adults, so they can be attributed to the so-called childish (juvenile) forms of system vasculitis.

Among the risk factors contributing to the emergence of systemic vasculitis in children, the most significant is the hereditary predisposition to vascular or rheumatic diseases, frequent acute infectious diseases, foci of chronic infection, drug allergies. With a combination of named factors with infection with the hepatitis virus in increasing the risk of the development of the nodule polyarteritis, when combined with the infection with tuberculosis - nonspecific aortoarteritis.

At the beginning of the systemic vasculites, children often observe common features: subfebrile or febrile temperature, joint pain, weight loss, signs of inflammation, determined when laboratory surveys. Along with this, each disease has a characteristic clinical picture. The originality of the clinical picture of the systemic vasculitis is due to the location of the meta lesion of the vessels, the size of the affected vessels and the prevalence of this process, the degree of recession of blood supply and oxygen starvation of organs and tissues.

Shenlein-Genoch's disease is an infectious-allergic disease, which is characterized by the defeat of capillaries and small blood vessels with the formation of microtrombov.

The disease begins more often. Most children rises temperatures up to 38-30 °C, the appetite is reduced, weakness appear, malaise, fast fatigue. Typical manifestations of disease are skin elements in the form of a Papulose-hemorrhagic rash. Usually it appears on the skin of the lower extremities, then on the buttocks, the upper limbs, the lower back, less often - chest, face and neck. Favorite location rash is the skin surface around large joints. Quite often observed skin itching and pain in the field of hemorrhage. Elements of rash round shape and rarely merge. Sometimes bloody crusts can appear, which are the result of tissue destruction. In the most difficult cases, it is very fast (in a few hours) the rise of symptoms of damage to various organs. The limbs acquire reddish black or blue. Fabrics become dense as a result of roofing skin infiltration. Skin lesions can be polymorphic due to further «Plugs». Often, children have a swelling of stop, legs, brushes, face, genital organs. Do not exclude hemorrhages on mucous membranes.

Shenlein-Genoch's disease is accompanied by lesions of the joints. (knee, ankle, rash, elbow) in the form of swelling, soreness, hypofunction. These changes can be saved from several hours to several days, and then the joint function is completely restored. Pain at the same time. In addition, children often have sharp stomach stomach pains that are more often localized in the navel area. In severe cases, there may be vomiting with blood admixture, bloody or black chair. At the same time, skin rashes are observed.

In case of shenlayin-genuch, kidneys may be affected, which is manifested by the advent of blood impurities and protein in the urine, but children are rare. Even less affected by the respiratory and cardiovascular system.

Kawasaki syndrome - a disease that strikes mainly 5 years old and is accompanied by the appearance of skin rash, an increase in body temperature, an increase in lymph nodes and sometimes inflammation of the joints and hearts.

Causes of Cavasaki's syndrome are unknown, but some researchers suggest the role of a virus or other causative agent of infection. The disease was first described in Japan in the late 1960s. Since then, thousands of cases in different racial and ethnic groups have been diagnosed worldwide, although the syndrome remains the most common in Japan.

As a rule, Kavasaki syndrome develops in children aged 2 months to 5 years, although he registered in adolescents. Boys fall about twice more often than girls. In rare cases, the disease amazes several members of one family.

The disease begins with an increase in body temperature, which periodically decreases, but usually not lower than 38.5 °WITH. The child is irritable, often drone, sometimes complains of spastic abdominal pain. During the day on the body and in the field of contact with a diaper, a red focal rash appears. Within a few days, rashes occur on mucous membranes, including the oral cavity and vagina. The child has a red throat; Red, dry, cracked lips; raspberry. Blush eyes, but there is no selection. Palms and soles also become red or bugs; Brushes and feet often swell. 10-20 days after the start of the disease, the skin on the fingers and legs begins to peel. The lymph nodes of the neck are often enlarged and slightly painful.

The most dangerous complication of Cavasaki syndrome is a heart damage; Other manifestations of disease do not lead to chronic skin damage, eyes or lymph nodes. Complications on the heart develop approximately 5-20% of children with Kawasaki syndrome 2-4 weeks after the start of the disease. The most dangerous for the heart is a complication - pathological expansion (dilatation) of coronary arteries. Although the small expansion of the arteries can be transient, expressed expansion (aneurysm) can lead to heart attack and sudden death.

Nodule polyarteritis (UE) - the disease is based on inflammation in the wall of small and medium arteries. In the course of the vessels, aneurysms are formed (the local expansion of the lumen with the thinning of the wall), where blood clots can form, which is the cause of blood supply to the organs and tissues.

Nature polyarterite - rare disease. A knotted polyarteritis with the same frequency boys and girls are sick. In most cases, the causes leading to the development of the nodule polycharitor are unknown. Possible causes of its occurrence can be drugs, preventive vaccinations, hepatitis B and C viruses, sharp respiratory infections or other infectious factors. Of great importance is the presence of a child food and medicinal allergies. 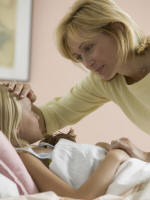 The disease usually begins gradually or acutely, with an increase in body temperature, muscle pain, joints, skin rashes and weight loss. Increased body temperature, sometimes up to high numbers, develops, as a rule, in the morning hours, may be accompanied by chills, the enhancement of pain in the joints, the appearance of rash. The temperature drop is often accompanied by pouring sweats. The fever can continue weeks and months and often precedes the emergence of other clinical symptoms.

At the beginning of the disease, a pronounced loss is typical until Cachexia. Significant body weight loss, as a rule, testifies to the high activity of the disease. Pain in muscles, joints are found in 30-70% of patients. Tytense pain in the calf muscles. Swelling and soreness of the joints may be celebrated. As put, large joints are affected (ankle, knee, shoulder, elbow and ray). Sometimes the defeat of the joints is the cause of incorrect formulation of the diagnosis of rheumatoid arthritis.

Lesion skin can be one of the first manifestations of the disease. The appearance of the lidio is noted (resistant blue spots in the form of a tree branches or severe marble), which is more often located on the limbs, and sometimes applies to the body and face. In the active period, the lidio has a bright color, during remission it pale. Frequently detected subcutaneous or intradermal nodules.

Vessel thrombosis is characterized by the development of leather and mucous membranes, which can lead to gangrene. It is manifested by a strong bakery pain, a feeling of burning and cutting in the field of large joints and fingers, later the formation and cooling of the skin and legs . The pain is intensified at night, painkillers bring only temporary relief.

The defeat of the nervous system is due to vascular changes in the head and spinal cord and individual nerves. Patients may appear headache, vomiting, loss of consciousness, convulsions, a sharp increase in blood pressure, asymmetry of the face, visual impairment.

The lesion of the gastrointestinal tract is a rather characteristic manifestation of nodular periaryitis. Patients have parlor stomach pains, nausea, vomiting, liquid chair, moderate increase in liver size and spleen. In severe cases, ulcers or gangrene can develop. Such patients have severe abdominal pain, possibly intestinal bleeding.

The defeat of the kidneys in children is rare, but the forecast of the disease depends largely. In this case, the presence of protein and erythrocytes in the urine, a persistent increase in blood pressure, up to 240/170 mm RT.Art. The damage to the cardiovascular system in the nodule Periatheritis can manifest itself by the damage to the coronary vessels, myocarditis, pericarditis, violation of the heart rhythm. Against the background of treatment, these changes in the heart disappear.

Nonspecific Aortoarterite (NAA) - a disease from a system of systemic vasculitis, characterized by the lesion of the aorta and the vessels derived from it, leading to oxygen starvation of the organs of the organs.

In children, nonspecific aortoarterite begins more often aged 10-16 years, although it can start up to 7 years (rarely). The smaller the age of the child, the time the course of the disease.

In nonspecific aortoarteritis, there is an educational aneurysm or essences of affected vessels. The narrowing of vessels is often manifested by the oxygen starvation of the body tissues and the absence of a pulse in the affected limb.

The first manifestations of nonspecific aortotaarteritis are malaise, sweating, muscle pain and joints, temperature rise, weight loss. The main manifestations of the disease depends on the place of the position of the affected arteries. With the most frequent embodiment of such a disease, the defeat of the arc of the aorta and its branches (arc syndrome of the aorta) in children there are headaches, dizziness, violations (sometimes persistent and heavy), up to full loss of vision. Most patients have the absence or weakening of the pulse on one of the hands (most often on the left), sometimes there is no pulsation of a sleepy, surface temporal artery.

In nonspecific aortaroterite, coronary arteries are often involved in the process, which causes angina attacks and can lead to myocardial infarction.