The efficacy of herbal medicine with mastitis and PMS

Mastopatia is one of the most commondiseases of the female reproductive system. The choice of therapy in this condition directly affects the two age groups. In one case, it refers to women 40 years and then in the first place is a matter of keeping their reproductive function. In another - older than 40, and then updated the compatibility of medicines for mastitis with other drugs that are used quite actively in the period of menopause. Furthermore, it should take into account the "collateral" mastitis status - in particular violations of the menstrual cycle and PMS. But in all cases, treatment should be worn as much as possible gentle nature, and preference given to broad-spectrum drugs, several problems are solved simultaneously. 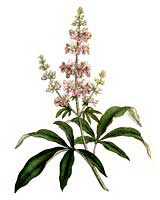 As a rule, in the early stages of mastitisthe choice is made in favor of herbal non-hormonal means. The plant has long established itself as a reliable non-hormonal preparation of a medicament for the treatment and prevention of mastitis and PMS among doctors and patients Mastodinon® company "Bionorica" (Germany). Mastodinon® It has pathogenic, dopaminergicmechanism of action (effect on D2 receptors laktotrofov pituitary gland), which reduces the secretion of anterior pituitary prolactin. At the same time normal production of gonadotropic pituitary hormones, which leads to the elimination of the corpus luteum insufficiency and related menstrual irregularities and infertility. By reducing the content of prolactin by the action of the preparation is the regression of pathological processes in the mammary gland at fibrocystic breast and stopped by cyclic pain (mastalgia, mammalgia). Violations of prolactin secretion processes can manifest itself in the form of latent hyperprolactinemia, which plays an important role in the development of premenstrual syndrome. Against the background of the drug, due to its components are leveled such manifestations of PMS, such as headaches, mental lability, irritability, depression.

The main active substance mastodinon® It is an extract of the fruit of the tree of Abraham orotherwise - Vitex sacred. This plant is used in traditional medicine since ancient times. Vitex fruits decrease prolactin secretion, which leads to the regression of pathological processes in the mammary glands, as well as the relief of mastalgia. With the help of this substance eliminated imbalance between estradiol and progesterone in the female body. Preparations on the basis of Abraham's tree are effective in the treatment of diffuse forms of mastitis. Mastodinon® is a combined preparation, it also includes: cohosh vasilistnikovidny, alpine violet, grudoshnik bitter, colorful iris, Tiger Lily. However, an important difference mastodinon® from numerous "food supplements", in that it is a clinically proven drug with high evidentiary basis. Mastodinon® made in Germany by "Bionorica" ​​the most modern technologies using innovative methods and environmentally friendly raw materials.

In the last 10 years in our country and abroad, several clinical studies have been conducted, which clearly showed the possibility mastodinon®.

In a multicenter, randomized, double-blind, placebo-controlled, double-dummy study, conducted by Professor Wuttke W. - with the participation of 120 women was studied the effectiveness of mastodinon® in solution and tablets for the relief mastodynia. Patients were pain diaries day before menstruation, including assessment of pain intensity on a visual analogue scale (0 mm as absence of pain to 100 mm as the unbearable pain). In parallel, assessed the presence of PMS symptoms (swelling, abdominal pain, headaches, mood disorders). After 3 cycles of treatment reducing the intensity of pain was 36.5 mm in the background Mastodinon solution and 36.7 mm on the background of a tablet formulation, significantly different from the dynamics of indicators in the placebo group - 20.8 mm reduction (p = 0.0067, p = 0.0076). The effectiveness of treatment was apparent after the 1st cycle: reduction of pain according to VAS of 22.5 mm in patients receiving mastodinon solution of 10.5 mm in the placebo group (p = 0.00472). In addition, PMS symptoms much less frequently recorded in the main group compared to placebo.

Another placebo-controlled,randomized, double-blind study of the efficacy mastodinon (drop) in the treatment of cyclic mastalgia, was held M.Halaska et al. The drug Mastodinon actively investigated in Russia.

It is known that the herbal medicine adhere to proceduremost delicate influence which is possible only with a particular disease. Herbal preparations are generally better tolerated causing less side reactions enable prolonged use - and as monotherapy, or in combination with other medicines. An important property of mastodinon® It is that it is effective and breast pathology, and in the menstrual cycle and PMS.