The symptoms of angina. Differences angina, rest, unstable forms and first aid in a fit of ischemia. 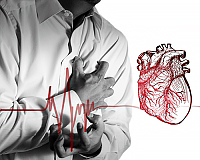 Angina - is a form of ischemicheart disease (CHD). Its old name - "angina pectoris." Factors predisposing to the development of this disease are many. However, the true reason for his one - narrowing of the arteries that feed the heart muscle. The symptoms of angina are often confused with symptoms of other, far less dangerous diseases. However, if a family has a sick-core, know the signs of coronary artery disease you have.

The attack of angina starts afterphysical exertion or emotional experiences. Suddenly, a man begins to feel pain in the sternum. Discomfort, patients often describe as a spasm, burning, pressure, heaviness, tightness, feeling short of breath. Usually only a symptom begins on the sternum, and subsequently (but not always) distributed in other areas of the body. Left shoulder, interscapular region, left arm, neck - that's the typical zone of irradiation of pain in angina pectoris.

An important diagnostic feature is a gesture,which man describes his feelings. For a typical symptom of coronary heart disease "clenched fist". The patient, showing the place where it hurts, unconsciously clenched his fists. If it points to one or two fingers - is unlikely diagnosis of angina.

The duration of the pain associated with a typical attackangina usually does not exceed 20 minutes. They are characterized by the fact that when a patient is forced to discomfort fades into complete immobility. Only after the complete cessation of discomfort, he begins to move.

First aid for this illness is considered to be receiving sublingual nitroglycerin. Typically, such treatment is enough to stop an attack. Pain subsides completely within 3-5 minutes.

Angina or rest - a descriptionextent of the disease. From these names it is clear that the patient has an attack of the forces resulting from or in peace and quiet. Both of these variants are stable type. When these types of disease state of the patient is relatively stable, a sharp deterioration is not observed and adequate treatment of his life is not in danger.

The term "unstable angina" was introducedin parallel with the other term "acute coronary syndrome", or ACS. This was done in order to distinguish angina, not life-threatening, and the form of coronary artery disease, a potentially hazardous for health.

For ACS also includes myocardial infarction. The diagnosis of "unstable angina" is put to people who have had a long bout of pain (over 20 minutes), is not stopped by nitroglycerine triple. Previously, doctors wrote, "PIS" and sent a person to the hospital. Now diagnosed with "acute coronary syndrome", but at the same hospitalization as required.

The only difference between stable and unstable forms - is the duration of pain and the level of risk of serious complications.

As stated previously, first aid in case of symptomsAngina is taking nitroglycerine under the tongue. It may be tablets, capsules, sprays - no matter what, the main thing - to take the medicine in the first minutes of the attack. Repeat the technique can be 3-5 minutes. If a three-fold use of the drug did not reduce the level of pain - immediately call an ambulance. The situation could become alarming at any moment. Timely recognize the symptoms of angina, you may well save the lives of their loved ones.