Dilated (congestive) cardiomyopathy (DCM) -disease of the heart muscle, in which comes to the fore a violation pumping function of the heart with the development of chronic heart failure. This is one of the most common cardiomyopathy. The most characteristic feature of the disease is a dilation (from the Latin word dilatatio - expansion, stretching) of the heart chambers, mainly the left ventricle it. DCM is also called congestive due to the inability of the heart in this disease to fully pump blood, so that this blood is "stagnant" in the organs and tissues of the body. 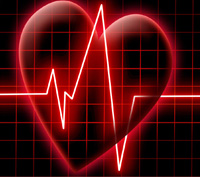 The fact that a high incidence of heartcuts impede the normal blood supply to the heart chambers, reducing its pumping function and depleting energy reserves of the heart muscle cells. Untreated tahikardiomiopatii promote occurrence of heart failure, but their symptoms are eliminated within a short time after the restoration of normal heart rhythm.

Mechanisms of development of dilated cardiomyopathy

The disease is based on the death of the individualcells in different parts of the heart muscle. In some cases, this is preceded by destruction of heart muscle inflammation (myocarditis), most often of viral nature. Affected virus, heart muscle cells are foreign to the body, and the patient's immune system begins to destroy them. Gradually the dead muscle cells are replaced by so-called connective tissue that does not have the properties of elongation and contraction inherent in the myocardium. Such changes in the heart muscle entail a reduction in the pumping function of the heart. To compensate for the reduction in the pumping function of the heart chambers dilate (ie, there is their dilation), and the remaining myocardium thickens and thickens (ie it develops hypertrophy). Dimensions of individual chambers of the heart may increase several times. At the same time there is a strong acceleration of the cardiac rhythm (sinus tachycardia), contributing to an increase in oxygen delivery to organs and tissues of the body.

For some time, the pump function of the heartimproving. However, the possibility of myocardial hypertrophy and dilation limited number of viable myocardium, hence they are specific to each case of disease. When the compensatory possibilities of the heart dry out, comes decompensation (loss compensation) of its pumping function with the development of chronic heart failure. In this step comes into effect one compensatory mechanism: begin body tissues absorb greater amounts of oxygen from the blood than in the healthy body. But, unfortunately, decreased cardiac pump function results in a decrease in revenues in the organs and tissues of oxygen necessary for their normal life, and the amount of carbon dioxide in them is increased. The disease impairs the appearance of mitral and tricuspid heart valves due to hyperextension of the valve ring (annulektazii) due to dilatation of the heart chambers.

In the later stages of dilated cardiomyopathythere may be complicated malignant arrhythmias that can lead to sudden death. Due to the reduced pumping function of the heart, and as a result of uneven contraction of myocardial cells in the heart becomes possible clots. The risk of thrombosis is the potential spread of thrombus fragments from the bloodstream (embolism), which may contribute to the development of heart attacks internal organs and occlusion of large vessels.

Manifestations of the disease are largely dependent onany chamber of the heart is involved in the pathological process. There is a risk of one or more chambers of the heart. In most cases, the prognosis is defined lesion of the left ventricle. That left ventricle, but not the heart in general and is thus "pump" in the general sense. Prior to the onset of heart failure, dilated cardiomyopathy is asymptomatic. The most typical complaints already come of heart failure are shortness of breath and fatigue. First, there is shortness of breath during physical activity (jogging, brisk walking, etc.), as well as the disease progresses, it occurs at rest. The appearance of complaints caused by decreased cardiac pump function and thus a deficit of oxygen in the body. Shortness of breath the patient's body as it tries to compensate for this deficit. Of specific note of complaints and palpitations, which is, as mentioned above, the protective (compensatory) character. In advanced cases of the disease symptoms are joining the so-called right heart failure: leg swelling, increase due to stagnation of the liquid portion of the blood of the liver (hepatomegaly) and abdomen (ascites). In general it can be noted that with the advent of complaints should be put an equal sign between the concepts of dilated cardiomyopathy and heart failure.

Diagnosis and treatment of dilated cardiomyopathy