Every second man and every third woman found with coronary heart disease and its severe manifestation - myocardial infarction. What we know about him?

Myocardium - is the heart muscle. In arteries,
called coronary, it enters the blood. If
some of these arteries clog blood clot - thrombus,
the portion of the heart, which it feeds, is left without blood supply,
hence, without oxygen. "Starved" of myocardial cells can
survive best in 20-30 minutes. Then they die - that is
infarction, necrosis area in the heart tissue. On the affected site
scar remains.

Recently, myocardial infarction rapidly
"Younger". Now is not uncommon, when it affects people, barely
thirty stepped threshold. However, in women younger than 50 years
heart attack - a rarity. Before this milestone of their vessels reserved
from atherosclerosis estrogen and other sex hormones.
But with the onset of menopause women, conversely, fall ill more often than men.

From what
This happens?

The main cause of the disease - atherosclerosis, which is almost
each of us. In addition, the circumstances of life call
(And beyond our control, and is not), in which the most likely to develop
high:

The presence of at least one of these factors
actually increases the risk of "dating" with myocardial infarction. And
joining each new risk factor increases the likelihood
ill exponentially.

They also say that
male pattern baldness is a kind of harbinger of a heart attack,
as one of the factors is the increased appearance of bald
androgen levels, in the case of the body hormonal fluctuations
It responds to changes in blood hormone levels rise
pressure and increase cholesterol levels in the blood.

What if this happens?

Atherosclerosis -
the process by which some are deposited in the wall of the large arteries
fats (cholesterol and other lipids), if they contain an excess
in blood. Those places on the vessel wall, especially where concentrations of lipid
many are called atherosclerotic plaques.

Plaque - most
weak spot in the vessel wall. Especially if it is "young" and it
I had not yet deposited calcium. In the most unexpected moment wall
plaques, and hence, the inner shell and the heart artery can crack,
overstrain. For the body is an alarm. Cracks it tends
heal a blood clot.

Therefore, the damaged spot
immediately begins to clot blood. Clot formation resembles
rolling from the mountain a snowball. If he does not interfere, the thrombus is very
rapidly grows until it closes the entire lumen of the artery. Then the blood flow
for it stops cell death begins and develops a heart attack
infarction. The larger the artery, which closed the clot, the more cells
infarction die.

The integrity of the atherosclerotic plaque may break the heart palpitations and high blood pressure.

A heart attack can
begin during the severe physical or emotional stress,
but it often develops for no apparent reason, as it were, 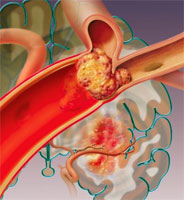 from scratch
place. Possible - even in a dream. But the most "favorite" of his time - early
morning.

Depending on the size of infarcts share
on macrofocal in which necrosis extends through the entire thickness
cardiac muscle, and small focal. More dangerous macrofocal infarcts
anterior myocardial wall.

Myocardial rear or side walls,
especially melkoochagovogo (not full thickness), the consequences are not so
traumatic. The scar on the heart muscle remains for life.
Resolved he can not, and myocardial heart "remembers"
always.

Symptoms and diagnosis of heart attack

The first sign,
allowing suspected heart attack, the pain usually becomes violent
chest, that is in the middle of the chest. Usually able
rest; crushes, burns, compresses, can be given in the arm, shoulder, back,
jaw and neck.

When angina like pain occurs during
load as myocardial it stronger and more frequent starts alone
and passes received after consecutive 3 nitroglycerin tablets
(1 tablet sublingually every 5 minutes).

With these
signs call "ambulance" immediately. The ability to endure in this
case - a dangerous enemy. Sometimes the disease is manifested by vomiting or
abdominal discomfort, disruption of the heart or difficulty
breathing, loss of consciousness.

Yes, it does happen:
man suffered a heart attack, even without realizing it. So-called
painless form of myocardial infarction is more common in people suffering
diabetes. The changes occurring in myocardial clearly visible
on elektrokardiograme. To clarify the area and the extent of damage can
It is scheduled ultrasound of the heart (echocardiography), which enables
see structural changes. In some cases, your doctor may recommend
carrying out scintigraphy.

In order not to risk the slightest
suspected heart attack doctors send the person to the emergency
hospital department. And the sooner, the better. It is only within
the first few hours, introducing the special preparations can be dissolved
"Fresh" blood clot and restore blood flow in a coronary artery. Then
should prevent the formation of new blood clots.

For this purpose,
medications that slow blood clotting. One of the most reliable
funds - acetylsalicylic acid, that is, ordinary aspirin.
It reduces the number of complications and prolongs the life of those who have suffered
heart attack.

Often used in the treatment of beta-blockers. These
drugs reduce myocardial oxygen demand and, consequently, save
heart muscle cells from destruction, reduce the size of necrosis.
At the same time they make the heart work more economical that myocardial
very important.

In recent years, for the treatment of myocardial used
not only medicines. In particular, so-called invasive methods
It refers coronary balloon angioplasty. Angioplasty is indicated for
drug therapy inefficiency. In another case, a heart surgeon
to offer coronary artery bypass surgery.

First
days required strict bed rest. At this time, damaged
the heart can not withstand even a mini 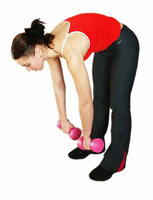 But still,
at least three days after a heart attack have to lie in bed under the supervision of
doctors. Then allowed to sit up later, to walk. starts
recovery, adaptation to a new, "postinfarction" life.

Possible after
myocardial return to usual life? Firmly say "yes" or "no"
difficult. After all, it at everyone: one works as a loader, and the other
He spends his days behind a desk. First it will be difficult to engage
usual activities, and the second will be little in the way. Besides,
complications, and do heart attacks are different.

recovery
after a heart attack lasts for several months. After all, the disease
no joke, it needs to revise its way of life, something in it
change.

Rehabilitation begins in the hospital, where passing a premium
drugs and the passage of physiotherapy
gradually increase the intensity of exercise. (Special
note - the word "gradually").

In no case do not force events.
Classes are physical therapy, walking, first on a flat surface,
then - on the stairs.

By the way, the ladder - a good test
readiness for active life. If the patient is at a medium pace
climb to the fourth floor, without feeling chest pain or shortness of breath, then,
recovery is successful. For a more accurate assessment of the
often use a sample from the dosage load. Usually it is performed
biking - bicycle ergometer or "treadmill".

how
long should I take the medication? The answer is one: all my life! Even
feeling fine. Precisely because it is beautiful, that is constantly
taken drugs help the heart.

Is it possible to have sex
life after a heart attack? Without any hesitation ask this question
doctor. Everything will depend on how you move
physics 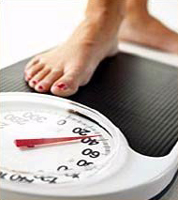 cal load (a sexual act - is the load, and considerable).

But there
and common to all the rules of which it is necessary to remember that sexy
contact ended pleasure rather than a new heart attack.

Firstly, it must be familiar with the partner, second,
in familiar surroundings, and thirdly, by selecting a position for sexual intercourse,
it is necessary to choose one in which the load is minimal - for example,
on its side.

From some of the risk factors (gender
and heredity) can not escape. But all the other well
amenable to our efforts! Maintain normal blood pressure,
as well as keep an eye on the weather - for example, for people with high
blood pressure is dangerous heat and geomagnetic
storm.

Normalize blood sugar levels. Move more! all
not necessarily "run from a heart attack," a walk in the fresh enough
air for at least 5.6 kilometers per day. It is very important to stop smoking - it
one of the most "aggressive" risk factors. Try to lose
the weight.

What should be the normal weight? Let's count: your weight
in kilograms divided by height in meters squared.
The resulting number is called the body mass index. We must strive
to ensure that it did not exceed 26.

Meals should be a minimum
in animal fat and cholesterol. More fruits and vegetables.
Instead of fat pork - white poultry meat, butter substitute
sunflower, fat - fish. Such a diet can reduce not only the
cholesterol, but also costs.