Types and causes of anemia

Anemia is defined as
"Pathological decrease in hemoglobin concentration of red blood cells." Anemia
It is caused by deficiency of iron or vitamins, hemolysis (destruction) or shortening the duration of the life of red blood cells
blood component normal 4 months bleeding and
also due to inherited or acquired defects or diseases.
Identify different types of anemia, each of which has its own reasons and
treatments. 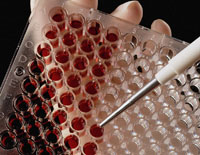 Iron-deficiency anemia -
the most common form of this condition. When iron deficiency bone
marrow produces small pale red blood cells (so-called microcytes), depleted
hemoglobin. Causes of iron deficiency: poor absorption of iron
body, inadequate intake of iron, pregnancy, growth leaps in
teens or blood loss due to a heavy period or
internal bleeding. The disease is especially prevalent among women
childbearing age due to menstrual blood loss, but also because of
increasing the body's need for iron during pregnancy
(Moreover, women have less iron stores than men). Iron
Anemia results in lower iron concentration in erythrocytes, which is manifested in
weakness.

It has been observed,
that is suffering from iron-deficiency anemia is almost 20% of women of childbearing age and
50% of pregnant women. Patients with pernicious anemia often feel cold and
They can not get warm - the iron plays a key role in temperature regulation
body, so its deficiency results in an inability to retain heat. Besides,
insufficient supply of oxygen to tissues gives rise to feelings
fatigue and weakness. In patients with iron deficiency anemia pale skin, they
often suffer from shortness of breath, dizziness and headaches. Blood tests allow
determine the level of hemoglobin and serum iron and
blood iron binding capacity. Vegetarians are at risk of developing
anemia if not enrich the diet sufficient quantity
Natural sources of iron - broccoli, spinach and so on.

Iron deficiency during
pregnancy leads to anemia. Therefore, it is important to be tested for
anemia at the first prenatal examination. During pregnancy, very
it is important to consume the necessary amount of iron the body. As fetal growth
iron requirement increases. Approximately 20 week gestation
iron stores in the body of a woman are exhausted. Iron deficiency is not reflected
only on the expectant mother's health, but also on the health of the child.

This type of anemia is caused by
destruction of red blood cells. This includes hemolytic anemia,
autoimmune anemia, sickle cell anemia and thalassemia.

Sickle cell anemia is also
It caused by destruction of red blood cells. In the normal state erythrocytes are
round shape and soft texture. Red blood cells easily pass through the blood
vessels and carry oxygen to all tissues of the body. sickle cell
different from normal red blood cells in that they are much harder and
have an irregular shape. Their shape prevents them to move easily through the blood
vessels, so they get stuck in small blood vessels, making it difficult to
normal blood circulation. Meanwhile, some organs (brain, heart, kidneys)
It requires continuous and constant inflow of blood.

Despite the fact that the body
attacks and destroys these sickle cells, it can not produce new
cells fast enough to replace destroyed. This reduces the
concentration of red blood cells, which in turn, leads to anemia.
Sickle cell anemia is generally caused by genetic defects or
hereditary disease. A child patient with sickle-cell anemia,
I inherited from parents defective gene with hemoglobin.

Thalassemia - a severe form
anemia, in which red blood cells are rapidly destroyed and iron
It settles in skin and vital organs. Anemia is caused by a decrease in this type of
the production of hemoglobin, or violation of the mechanism of its production. Hemoglobin -
molecule consisting of erythrocytes. The hemoglobin protein chains contained two
type - alpha and beta chains. Any deficiency in these chains causes a disturbance
the mechanism, size and shape of erythrocytes.

The cause of anemia can also be
severe blood loss. A large number of red blood cells can lose blood when
or prolonged bleeding unnoticed. Such bleeding often occurs
as a result of diseases of the gastrointestinal system, for example, ulcers, hemorrhoids, gastritis
(Inflammation of the stomach) and cancer. Chronic bleeding can also occur in
case of nonsteroidal anti-inflammatory drugs, such as aspirin
or Motrin. Often, blood loss is due to menstruation and childbirth, especially
with heavy menstrual bleeding.

pernicious anemia - this
classic manifestation of deficiency of vitamin B12.
Vitamin B12 found in meat, milk, dairy products and
eggs. Particularly susceptible to deficiency of this vitamin, and bone marrow tissue
nervous system; in the absence of treatment of anemia and degeneration
nerves. A characteristic feature of this anemia - formation in the bone marrow instead
Conventional red cell progenitors anomalous large cells
m. n. megaloblasts. The increased content megaloblasts
cytoplasm, nucleus but underdeveloped; they are not able to turn
and killed erythrocytes in the bone marrow. On this basis
pernicious anemia classified as megaloblastic anemia. AT
1926 Dzh.Mino U.Merfi and found a positive effect of extracts
liver with pernicious anemia. This is an important observation prompted the
Studies leading to the explanation of this effect and the nature of
disease. It has been shown that the disease is based on the innate
inability to secrete stomach substance (called intrinsic factor)
necessary for the absorption of vitamin B12 in the intestine. Pernicious anemia is most common
adults and is associated with atrophy of the stomach. Identify pernicious anemia
It helps ordinary blood test. The analysis determines the absorption Schilling
vitamin B12 in the intestine. Sources of vitamin B12 and
Folic acid: milk, eggs, meat, shellfish and poultry. 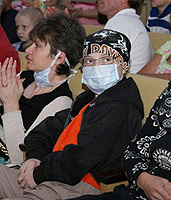 Aplastic
Anemia is caused by the body's inability to produce red blood cells
in sufficient amounts. At this anemia
in bone marrow tissue is virtually absent forming blood
cells. In some cases, the cause is exposure to ionizing
radiation such as X-ray, or toxic substances, including some
drug compounds; in other cases, the cause remains unknown.
Congenital aplastic anemia (Fanconi syndrome) is caused by
unexplained failure of the bone marrow to produce red blood cells.

Aplastic
Anemia occurs suddenly or develops gradually. common symptoms
This type of anemia: fatigue, shortness of breath, rapid heartbeat, paleness, rash
and zazhivaemost bad cuts. Aplastic
anemia and hereditary. If both parents are carriers
defective gene (congenital hypoplastic
anemia), it is not excluded that the disease will be transferred to children. Aplastic
Anemia is diagnosed based on the results of blood and bone marrow.
This is a serious disease that requires immediate treatment with antibiotics.

Also
sometimes carried out the bone marrow transplant and blood transfusion. sick
insulated to prevent transmission of infection and reduce the symptoms of anemia.
Due to poor blood clotting, patients with aplastic anemia are prone to
severe bleeding. Diseases subject to equally men and women,
regardless of age and nationality.

Treatment depends on the nature of the factors which have caused anemia.
Best results are observed with the introduction of missing certain substances
such as iron with iron deficiency anemia, vitamin B12 at
pernicious anemia and folic acid in the sprue (disease,
characterized by malabsorption processes in the gut
and accompanied by megaloblastic anemia).

Anemia is caused by a decrease in red blood cell production and
arising at such chronic diseases as cancer, infection, arthritis,
kidney disease and hypothyroidism are often mild and do not require
special treatment. Treatment of the underlying disease should positively affect
and anemia. In some cases it is necessary cancel preparations
inhibiting the formation of blood, - antibiotics or other chemotherapeutic
means.

Blood transfusions are usually shows only
in urgent cases, requiring the recovery of circulating blood volume
and the amount of hemoglobin, as well as exacerbation of chronic anemia
in the absence of other therapeutic agents. In rare anemias,
the cause of which remains unclear, sometimes helping derivatives
adrenal corticosteroids and male sex hormones,
vitamin B6 and specially treated liver extracts.