Home>Diseases of the blood (hematology)>The catastrophe in the organism: DIC

The catastrophe in the organism: DIC

Syndrome of disseminated intravascularblood clotting - a dangerous condition of the human body that can lead to death. Just about the complex - DIC - read in this article. 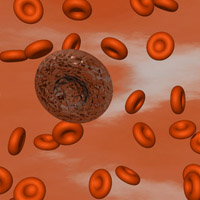 Despite the subtlety of the regulation processBlood clotting in the human body, sometimes there are situations when the whole complex mechanism of blood clots only in areas of vascular injury is almost completely out of control. As a result, it begins a real disaster, which can be fatal. This is the so-called syndrome of disseminated intravascular coagulation (DIC). The word "dissemination" comes from the Latin disseminare - dissipate, distribute.

The consequences might guess. Such deadly dysregulation of thrombosis may begin in critical situations with which the human body is facing, to put it mildly, not often. For example, DIC is often a consequence of heavy bleeding after abortion, serious injury, and many other states of shock. It can also occur as a result of the disintegration of blood cells under the influence of powerful poisons or infections (blood poisoning).


The pendulum of death


The logic steps of the circulatory system in the above cases generally clear.
The body receives information about the intensive,life-threatening blood loss and "pulling the lever" emergency. This will start the process of generalized thrombotic events - the so-called hypercoagulable. Yes, this measure in itself life-threatening, but choose a more gentle way of protection is not necessary.

A lot of blood clots in the vessels appeared not onlyinterfere with circulation. They start the reverse process. Blood clots begin to deteriorate rapidly, anticoagulation process begins. He often gets such strength that the blood stops clotting in general. Figuratively speaking, the state of the circulatory system in DIC resembles a pendulum that swings at an alarming amplitude. He throws it into one side or the other.

Gipokoagulyatsii easily detected by booming bruising at the injection site, and even just on the skin pressure.

For example, the conventional cuff applied toPressure measurements can be left on hand sinister trail below the compression space arms. Patients appear cyanosis of the mucous membranes (cyanosis), urine becomes pink due to problems with the kidneys, which are beginning to miss the red blood cells, difficulty breathing. Not for nothing in handbooks on medicine write that "DIC - heavy accident of the body, which sets him on the brink between life and death."

Display difficult person from such a state, butstill possible. To save his life, doctors are often injected into the blood stream at the beginning of the development of heparin syndrome - a substance which is a natural anti-coagulant (ie, prevents the formation of blood clots). This substance was first isolated from the liver, hence the name (Greek hepar -. Liver), although it is not only formed in this body, but in some cells arranged on the walls of blood vessels.