Symptoms and treatment of hemolytic anemia

The concept of hemolytic anemia

Hemolytic anemia is a groupdiseases, the main feature of which is the increased breakdown of red blood cells. Under physiological conditions, the duration of the life of red blood cells is 100-120 days. Aging erythrocytes are destroyed in splenic sinuses, as well as in bone marrow.

The resulting physiologicaldecay bilirubin pigment erythrocytes circulates in the blood as free (indirect) bilirubin, which is transported to the liver cell, where the participation of enzymes from liver cells enters the bile ducts in and secreted with the bile into the intestine.

In hemolytic anemias due to the enhanceddestruction of red blood cells their life expectancy is shortened to 12-14 days. Accelerated hemolysis (destruction of red blood cells) can be predominantly intracellular or intravascular. Intracellular erythrocyte decay occurs in cells retikulogistiotsitarnoy system, mainly in the spleen, and accompanied by an increase of indirect bilirubin, which is excreted in urine and feces. When intravascular hemolysis hemoglobin arrives in an increased amount in the blood plasma and is excreted in the urine in unchanged form or in the form of hemosiderin, which can be deposited in the internal organs and cause hemosiderosis.

Hemolytic anemia downstream may be acute or chronic. All hemolytic anemias are divided into congenital (hereditary) and acquired.

Hereditary hemolytic anemia is a consequence of different genetic defects in red blood cells that are functionally defective and unstable.

The group of hereditary hemolytic anemias include:

The group acquired hemolytic anemia include:

Hereditary hemolytic anemiadivided according to the location of a genetic defect in the erythrocyte (membrane enzymes globin structure). The most common hereditary disease of the first group is microspherocytosis (Chauffard-Minkowski's disease). Much rarer elliptocytosis and stomatotsitoz. Most disease in this group can be detected already in form erythrocyte.

Another group of inherited anemias causeddeficiency in red blood cells of different enzymes. Hemolysis (decay) often triggered by certain medications. The third group of hereditary hemolytic anemia is associated with impaired gemoglobinoobrazovaniya that affects the red blood cells and their resistance to various influences. A typical representative of this group is sickle cell anemia and mishenevidnokletochnaya (thalassemia).

The main symptoms and treatment of hemolytic anemia 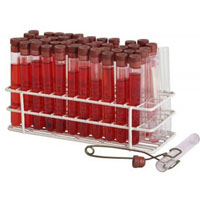 The main symptoms of the disease depend on thethe severity of hemolysis. In most cases, the first signs are detected in adolescence or adulthood. In children, the disease is usually detected in the survey about the disease of their relatives. Complaints without exacerbation of the disease may not be available.

During an exacerbation marked weakness,dizziness, fever. One of the main symptoms is jaundice, which for a long time may be the only sign of disease. Intensity jaundice depends, on the one hand, on the intensity of hemolysis, and on the other - on the ability of the liver to bind free bilirubin. The urinary bilirubin is not detected as free bilirubin does not pass through the kidney. Kal intensely colored in dark brown.

The cardinal symptom of hereditarymicrospherocytosis is an enlargement of the spleen, which extends from the costal arch at 2-3 cm. long flowing hemolysis observed a significant enlargement of the spleen, in connection with which patients complain of heaviness in the left upper quadrant. The liver is usually of normal size, sometimes found to be increased. Severity of anemia is different. Often there is a moderate decrease in hemoglobin. In some patients, anemia is absent. The most dramatic decrease in the number of red blood cells and hemoglobin is observed during hemolytic crises.

In the middle-aged and older people sometimesfound difficult to treat leg sores associated with the collapse of red blood cells in the small capillaries of the extremities. The disease is characterized by the so-called hemolytic crisis, manifested by a sharp increase of symptoms on a continuous current of hemolysis. Hemolytic crises arise usually after infections with colds, women - in connection with pregnancy.

Acquired autoimmune hemolytic anemiaassociated with an increase in the patient's own antibodies to red blood cells, which are glued together and subjected to decay in the spleen. The most common in chronic lymphocytic leukemia, limfogranulomatoz, acute leukemia, systemic lupus erythematosus, rheumatoid arthritis, chronic hepatitis and cirrhosis of the liver.

The means of choice for the treatment of autoimmunehemolytic anemia are glucocorticoid hormones (prednisolone), which almost always stop or reduce hemolysis. A prerequisite is a sufficient dosage and duration.

In the acute phase must be 60-80 mg / day (based1 mg / kg) prednisone. With the improvement of the dose of prednisone is gradually reduced to maintenance. The maintenance dose - 5-10 mg / day. Treatment is carried out for 2-3 months prior to the disappearance of all signs of hemolysis.