Sickle-cell anemia refers tohereditary blood diseases and occurs in people who have inherited two defective gene from their parents. For the disease is characterized by periods of relative well-being, which are replaced by periods of exacerbation.

The concept of sickle cell anemia 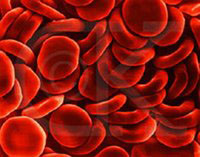 Sickle cell anemia is a serioushereditary blood disease, which is characterized by periods of relative health, interspersed with crises (periods of exacerbation of the disease). Victims of this disease there is a constant anemia, and they are very susceptible to a variety of serious infections. Anemia - a condition in which the blood does not have enough substance that carries oxygen to the tissues of the body. It can lead to weakness and even the development of jaundice.

Sickle-cell anemia is observed only inthose who inherited 2 gene (defective gene, one from each parent) that cause production of defective hemoglobin called hemoglobin Sickle cell. Hemoglobin - is the red pigment that gives color erythrocytes (red blood cells), which carries oxygen to the tissues of the body. Hemoglobin capture oxygen in the blood circulation in the lung. During the circulation of oxygenated blood (blood, oxygen-rich) through the body loses hemoglobin oxygen that goes into the body's cells. Although sickle cell hemoglobin can operate normally in the transport of oxygen, oxygen loss after it tends to clot sickle. As a result, the normal round and covered with red blood cells villi become crescent or sickle-cell. As light circulates through the blood and more oxygen absorbing hemoglobin again recovers its normal shape.

A positive aspect of this disease is that sickle-cell hemoglobin protects against malaria infection.

The gene of sickle-cell hemoglobin morecommon in the black population, although sometimes there are the inhabitants of the Mediterranean, people from India and Asia. In the United States, about 1 out of every 10 black residents carries a gene of sickle-cell anemia. The carriers of one gene usually perfectly healthy and have no symptoms, they just have a predisposition to the disease.

In general, people with sickle cellanemia can lead a full life and to carry out any work, have a family and to participate fully in social and political life, or, for example, engaged in teaching activities. Many people live to 40 and 50 years, and some even up to 70.

Symptoms of sickle cell disease are divided intotwo main categories. Due to the fragility of red blood cells anemia is always there, which can lead to loss of consciousness, making the patient physically less hardy and can cause jaundice (associated with excessive disintegration of hemoglobin).

In addition, periodic blockage of smallcapillaries anywhere in the body can lead to a wide range of symptoms. It is almost impossible to describe the "typical patient" suffering from sickle cell disease, because the symptoms and their severity vary widely. Some characteristics are common to almost all patients with sickle cell anemia.

Usually babies are perfectly healthy, havenormal weight and develop normally, no symptoms have not manifested until 3 months of age. The first signs of sickle cell anemia in a baby are usually swelling and soreness of the hands or feet, fatigue and distortion of limbs and sometimes, a little later, giving up distance. This symptom is a result of blockage of the red blood cells of the capillaries of small bones of the hands and feet, and blood disorders. Erythrocytes drop of the liquid portion of the blood in the capillaries and deposited as a precipitate. Cluster of red blood cells gradually resolves itself, but as long as it does not require doctor's help to alleviate pain and detect possible comorbidities. Child with sickle cell disease usually looks pale possibly slightly jaundiced, but otherwise usually well.

Only very serious complicationsickle-cell anemia in a child under 5 years of age is an infection. Cluster of red blood cells and clogging of the capillaries in the spleen, the organ that normally filters out bacteria from the bloodstream, occurs during the first years of life, which makes children particularly susceptible to fatal blood poisoning - sepsis. Therefore, parents of young children with sickle cell disease, warn them to be careful not to miss the early symptoms of infection, such as irritability, nervousness, fever, and poor appetite.

Parents should apply immediately formedical care if your child has any of these symptoms. When the blood infection early enough to begin to use antibiotics, fatal complications can be avoided. After 5 years of age, when a child has already developed the corresponding natural antibodies to the bacteria, the probability of a deadly bacterial infection is significantly reduced.

The problem of school-age childrenSickle cell disease is usually episodic obstruction of red blood cells of the capillaries of large bones. In most cases, these episodes occur relatively easily, there are only slight aching in the bones.

With age, occlusion of capillaries process canand affect other organs. If that happens, for example, in the lungs, severe respiratory disease develops. It is a rare complication in patients with sickle cell disease - blockage of brain vessels leading to stroke.

Teens with sickle cell anemiaExperiencing anxiety and concern due to the fact that their physical development is usually delayed for 2-3 years. These teenagers are usually smaller in size than their classmates, they are often teased for a delay in sexual development. However, over time puberty is still coming, and studies show that women with sickle cell disease can carry out their normal reproductive function. Women with sickle cell disease, of course, able to bear and give birth to normal children, but during pregnancy have an increased risk of complications that can lead to miscarriage, premature birth or the strengthening of anemia in the mother. Such pregnant women shall be under the supervision of a gynecologist, having special experience in high-risk pregnancies. During pregnancy, blood transfusions may be required such women.

Other patients with occlusion of the retinal capillaries of the eye may occur, which can eventually lead to blindness.

Although sickle cell anemia symptoms rarelyappear before 3 months of age, can be diagnosed at any age. Fetus sickle cell anemia can be detected by means of amniocentesis (sampling fetal waters by a needle injected into the uterus through the abdominal wall). The amniotic fluid contains fetal cells and in cells are the genes responsible for the production of hemoglobin, so you can explore the direct fetal genes. This test is very important in order to prevent fatal complications that are common for children with sickle cell disease is in the early years of life.

A method of treating sickle cell anemia is notexist. However, the overall improvement of health care has become an opportunity to a longer and healthier life of children suffering from this disease. Currently, attention is paid to nutrition, enlightening measures and prevention of infections. It is important to maintain contact with the primary care physician, who is familiar with the early signs of complications arising from sickle cell anemia.

It is especially important constant medical check-upyoung children with sickle cell disease, to prevent early life-threatening infectious complications. Anemia may increase as a result of an infection or a sudden increase in the spleen, the child may require hospitalization for treatment of infection or pain. Pregnancy and surgery, as well as diseases of the eye, require the attention of specialists with special experience with patients suffering from sickle cell anemia.

The use of vaccines against pneumococcus and earlyAntibiotic therapy saved the lives of many young children with sickle cell anemia. With mild aching in the bones can be managed at home with the help of the rest, consumption of adequate amounts of fluid and painkillers sold without prescription. Sometimes these attacks of pain can be quite severe, and for getting rid of them may require hospitalization of the child. Most children with sickle cell disease are normally developed mentally, can succeed in school, passing quite a few days because of painful crises.

When serious respiratory illness requiring hospitalization to give the child oxygen and, if necessary, for blood transfusions.

For the treatment of patients with clogged capillariesretina new methods of treatment using a laser can be used. Recommended observation ophthalmologist to detect lesions in the early stages, before they lead to blindness.