Thrombocytopenia - a condition characterized by a decrease in the platelet count below 150 x 109 / l. and bleeding disorders. What kind of species is thrombocytopenia? Read more about this in the article.

platelet pathology is the causebleeding in nearly 80% of cases. This thrombocytopenia - the most frequent manifestation of it. It is believed that normal platelet count should be between (150-400) × 109 / L. Under normal physiological conditions in the blood platelet count can vary. It depends on the physical activity, digestion, hormonal levels in women of menstrual cycle - in the first days of menstruation it may decrease by 30-50%. The lifespan of platelets - 9-10 days. About 1/3 of platelets deposited in a normal spleen. In cases when the platelet count of less than 150 × 109 / L, should be stated thrombocytopenia. The frequency of this phenomenon sufficiently high - from 10 to 130 new cases per 1 million people.

There are acute and chronic thrombocytopenia. The latter is diagnosed when its duration exceeds 6 months. In patients with platelet counts above 50 × 109 / L is extremely rare bleeding disorders. In this regard, many believe that to ensure full haemostasis enough platelets in the range of 30 × 109 / L, 15 or even 10 × 109 / L platelets can provide full effective hemostasis. Perhaps that is why most of thrombocytopenia occurs in medical practice only as a laboratory phenomenon, causing the surprise of doctors, as does not manifest itself clinically. At the same time decrease in platelets below 100 × 109 / L should attract serious attention of the doctor, because he may be the symptom of thrombocytopenia accompanied by serious pathology. Due to these reasons, in each case of thrombocytopenia need to find out.

Hemorrhagic thrombocytopenia was one ofFirst identified hemorrhagic diseases of humans. There are several types of thrombocytopenia. Very often, they are secondary, as a symptom of a disease. However, thrombocytopenia syndrome may often be independent, but its pathogenesis different. Thrombocytopenia may result from an inferiority generation platelet destruction due to their increased immune and non-immune mechanisms, and redistribution in the body from the blood to individual organs, usually the spleen, or their accumulation in the thrombotic masses with massive intravascular coagulation. There are many cases a combination of these reasons. 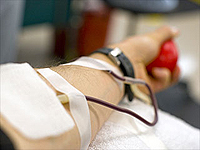 However, the lack of clear criteria for the confirmation of certain
pathogenetic mechanism makes its use for practical
the doctor is not very desirable, since most doctors try
identify the specific forms, and then
comprehend its etiology and pathogenesis. In this regard, it seems to us
immediately inform appropriate practical information to doctors
regarding the possibility of thrombocytopenia as a separate
syndrome secondary at some other disease.

Particularly noteworthy pathological
State, accompanied by enlargement of the spleen. Most often it is
observed in portal hypertension of any origin (cirrhosis of the liver,
other violations of the outflow through the portal vein), storage diseases
(Tezaurismozy): Niemann-Pick disease, Henda-Shyullera-Christian, Gaucher,
hemochromatosis et al., as well as many of the conditions listed above
- Infection, diffuse disease of connective tissue and blood diseases.
Occasionally observed splenomegaly and in congestive heart
failure. As previously mentioned, in normal spleen
concentrated by 1/3 to 1/4 of the platelet. Consequently
any increase in the spleen leads to increased delay in it
platelets, which results in the phenomenon of thrombocytopenia. when all
these conditions will be more fair assumption
the possible presence of multiple pathogenic mechanisms. An exception
or confirmation of many of these diseases often requires
a great differential diagnostic work.

Secondary thrombocytopenia are the result of
Radiation effects on the energy beam being a symptom
disease, various toxic substances, including salts of heavy metals,
alcohol, etc.., entering the symptom of pancytopenia. The likelihood of such a
the mechanism of thrombocytopenia in patients with uremia. It is possible that a violation
regulation of hematopoietic vitamins and hormones has certain
especially for trombotsitopoeza, however thrombocytopenia with
pernicious anemia should only be considered as a symptom,
sometimes major.

Primary thrombocytopenia, ie those diseases
the clinical manifestations of which are fully associated with thrombocytopenia and
in which a pathology is not observed, also have different
pathogenetic mechanisms, but these diseases deserve special
descriptions.

Thrombotic thrombocytopenic purpura (TTP) (Moshkovits disease) It was
first described by the author, 16-year-old girl in 1924. The disease was
acute onset and manifested by fever, renal and central nervous system functions,
symptoms of heart failure with severe thrombocytopenia. On
autopsy revealed a lot of blood clots in capillaries and small arterioles,
almost entirely composed of platelets and fibrin small
component. For the disease characterized by a combination of severe
thrombocytopenia with intravascular hemolysis (with a lot of
fragmented erythrocytes) and neurological manifestations - from
unsharp disturbance of consciousness, motor and sensory functions to
convulsions and coma. These clinical symptoms in 70-90% of cases are
single-entry, and in only 10-30% of patients when they recur
pregnancy, various infections, chemotherapy. For some patients
they can recur at regular intervals. This allows
suggest that TTP syndrome is heterogeneous and combines several
various diseases. Practical measures: plasmapheresis, plasma replacement
patient on the platelet poor plasma, fresh frozen healthy
allow to save up to 90% of patients today, recently condemned to
death.

Hemolytic-uremic syndrome many
considered as a kind of TTP. However, the absence of pathology
nervous system, resistant hypertension and severe renal
pathology with progressive renal insufficiency and
the possibility of inheriting the disease are forced to consider it
independent. Thrombocytopenia is severe, accompanied by
intravascular hemolysis - the direct result of thrombotic occlusion
vessels.

Medicinal Trombone persecution. described pretty
many cases of thrombocytopenia, which follow the therapeutic measures.
Initially, attention was paid only to the cases of thrombocytopenia,
accompanying treatment of radioactive drugs. Drugs
drugs can cause thrombocytopenia in various ways. cytostatics
trombotsitopoez able to inhibit the bone marrow. quinidine,
sulfonamides, salicylates, dipyridamole, gold preparations, cephalothin,
trimethoprim, a-methyldopa and may include other immune mechanisms.
They provoke thrombocytopenia, settling on platelets and stimulating
antibodies to this complex. Other drug form
complexes with plasma proteins, which then connects to already
platelet membrane and leads to the production of antibodies to the
formation. Others cause the destruction of platelets themselves, and thus
contribute to the formation of antibodies directly to the latter.

In recent years, attracted a lot of attention
thrombocytopenia caused by heparin, or, as some suggest
researchers, thrombocytopenia, associated with heparin.
Almost 10% of patients receiving intravenous heparin and moderately reduced
platelet count, which usually occurs within 1-2 days
after administration, and rate reduction are rarely less than 100 x 109/ L. Today it is known that heparin can cause thrombocytopenia in two types.

The first type, described above, is due to direct
Platelet interaction with heparin. Communicate it to the surface
platelets depends upon the molecular weight heparins, and their sulfation
and the extent of platelet activation caused by this interaction.
Note that the degree of thrombocytopenia in parallel with reduced
decrease in molecular weight heparin is administered. Geparinindutsirovannaya
thrombocytopenia type 1 occurs quickly after administration, sometimes
within a few hours, due to changes in the platelet membrane,
and provides that the aggregation of platelets. This type of thrombocytopenia
It passes quickly and the risk to the patient is not.

Geparinindutsirovannaya, or associated,
thrombocytopenia type 2 occurs between 4-20 th day after administration
heparin with a maximum severity on day 10 in patients receiving
heparin for the first time. Repeated administration of heparin, it can
occur in the first days after drug administration. This
thrombocytopenia caused by immune mechanisms, provoked
heparin, responsible for the production of specific antibodies to
platelets. These antibodies are detected in almost 7.5% of patients
receiving unfractionated heparin produced from the products
derived from pigs, and only 2.5% of those treated with
low molecular weight heparins.

The mechanism of thrombocytopenia differs from other
immune thrombocytopenia fact that in this case the antibody does not cause
amplification of platelet phagocytosis by macrophages system and stimulate
intravascular platelet aggregation. From other immune
thrombocytopenia it also differs in that it is practically at
no hemorrhagic complications despite the fact that it
develops on the background of anticoagulant therapy. This thrombocytopenia on
essentially reflects the consumption of platelets in the formation mikrotrombov,
which can grow to a large size, and defining
thrombotic events. Recent dangerous in those cases where
Heparin does not stop, can be the cause of death
in 20-30% of cases.

Hereditary and congenital thrombocytopenia. at
lack of patient radiation (radial) bone think of inherited
Pathology - TAR syndrome (thrombocytopathy in the absence of the radial
bone), which is also characterized by the release of dense defect
granules and platelet thrombocytopathy. Thrombocytopenia, combined with
defective pigmentation of hair, skin, retina, oblige to think about the presence of
the patient has an inherited disease - Chediak-Higashi syndrome, which
also characterized by defective platelet granule release, and as
consequently, thrombocytopathy. The presence of eczema and a tendency to infectious
disease causes always assume the inherited pathology -
Wiskott-Aldrich syndrome, also defective release of dense granules
and platelet trombotsitopaty of platelet aggregation defect
adrenaline. The presence in the blood smear giant platelet yields
suggests as an inherited syndrome Meia Hegglina and
Bernard-Soulier disease. Their difference lies in the fact that the syndrome
Meia Hegglina can detect abnormal blood granulocytes with major
inclusions, and a defect is detected while the disease Bernard-Soulier
glycoprotein lb, which determines the platelet adhesion factor
Willebrand. It is possible that some of thrombocytopenia newborns
It is an inherited deficiency of thrombopoietin.