The most common hemolytic diseasenewborn develops due to Rh-conflict. Is that Rhesus-conflict can arise only when a woman has a negative Rh factor, and a man - positive.


"In school, I was hiding from medical examinationstoilets and changing rooms. House, opposing the call of the doctor, resorted to all sorts of tricks: pressed my forehead against the frozen window glass to cool it and hide fever, coughed under the blanket, shook off the thermometer. And when I grew up, nor disease, nor for preventive check-ups somehow not enough time, we have always been more important and absolutely urgent matters. As a result, the existence of such things as the Rh factor, and that I have it is negative, I found only twenty-one years - that is, at that time, when I decided to become a mother. "

Rh - an antigen (or protein) whichIt located on the surface of erythrocytes (red blood cells). It was discovered just 35 years ago. And at the same time and found that about 85% of men and women have this Rhesus factor, and, hence, are Rhesus-positive. And the remaining 15%, respectively, Rh factor and does not have called Rhesus negative.

In ordinary life, neither the presence nor the absence ofRh factor no special role does not play. It becomes important only under such extreme circumstances, such as a blood transfusion. Or pregnancy. Why pregnancy? Because if a future mother is Rh negative and the Pope - is positive, a child can inherit both mother's Rh, and my father's, then the probability of a fifty-fifty. If he inherits the mother's negative, all is well, no danger. And if the father's positive? Then there is a threat of Rhesus-conflict. What it is? This incompatibility between the blood of mother and her fetus.

Rh factor fetus overcomes the placentalbarrier and enters the mother's blood. And her organism, "not recognizing the fetus" and treating it as something alien, begins producing protective antibodies. These antibodies cross the placenta and start to "fight" with the red blood cells of the child, destroying them. What does it lead to? And to abortion if the mother's body will reject the fetus. And the fact that the blood of the future baby will begin to produce more bilirubin, a substance coloring the skin in yellow and leads to jaundice. Also, bilirubin can damage the brain of the child, cause he irregularities in the development of hearing and speech. In addition, as erythrocytes in fetus blood will be constantly annihilated, his liver and spleen will accelerate the production of red blood cells, dramatically increasing in size. In this race, however, they will inevitably lose, and as a result of the unborn child can begin anemia, caused by threateningly low content of erythrocytes and hemoglobin. In addition, Rhesus-conflict can cause congenital dropsy (edema) of fetus and even lead to his death.

Preventive measures and methods of treatment of Rhesus-conflict

There are methods for prevention and treatment ofRhesus conflict. The very first of them - as early as possible to know their blood group and your Rhesus factor, as well as group and Rh future father. Sometimes, Rhesus-conflict starts and the group incompatibility between the blood of mother and baby, for example, if the mother's blood group 0 and the unborn child and B. Fortunately, such incompatibility is less dangerous and portends serious complications. If Rh same in both parents, there is no cause for worry. If my mother it is negative, and the pope is positive, it will have to regularly go through a procedure such as a blood test from a vein. So doctors will be able to constantly monitor the amount of antibodies in your blood and to observe the beginning of Rhesus-conflict. Up to 32 weeks of gestation should donate blood once a month, from 32 th to 35 th - twice a month, and then up to the date of birth on a weekly basis.

If, nevertheless, Rhesus-conflict starts,professionals can resort to different measures to save a baby. In some cases, caused by premature birth and do exchange transfusion to the newborn - doctors administered him the blood of the same group, but with Rhesus negative. This operation is carried out within 36 hours after birth.

It is also possible to reduce the riskRhesus-conflict development during next childbirth. For example, by introducing a special vaccine - anti-Rhesus immunoglobulin immediately (within 72 hours) after the first birth or terminate the pregnancy. The principle of action of this drug is based on the fact that it "connects" aggressive bodies in mother's blood and brings them out of her body. After that, they can not threaten the health and lives of the future baby. If for some reason, Rh antibodies are not administered prophylactically, such "vaccination" can be done during pregnancy. The introduction of anti-Rhesus immunoglobulin do after amniocentesis, amniocentesis and surgical intervention in ectopic pregnancy.

"In general, - a doctor finished his story, - youNow only need to know one thing: a good prognosis. So regularly donate blood and not think about nothing more. " And I went to donate blood. Once, twice, three ... And soon I found out that it's not an adversary procedure. Becoming the ordinary, it has ceased to appear some terrible ordeal. Just think, just - and you're done. One is bad - such an analysis should be done in the morning and always on an empty stomach. But the most important thing was that each subsequent analysis showed the same result - no threatening amount of antibodies in my blood and, therefore, no Rh-conflict.

With these figures, I came up to the long-awaitedthe day of birth. And she gave birth to absolutely healthy daughter. Her appearance is naturally pushed out of my head all other thoughts. And, unfortunately, I completely forgot to ask me to enter the anti-Rhesus immunoglobulin within 72 hours after birth. And to me, no one suggested. But then, to be honest, no, I did not think about any of repeated pregnancies. And now? You know, I do not speak to anyone else ... But, in my opinion, two children in the family - it is much better than one. And, perhaps, I am ready to repeat it all. Surrender all the tests, the doctors will consult, we introduce the most antirezus. Of course, a little scary. But as the doctor said, a good forecast! 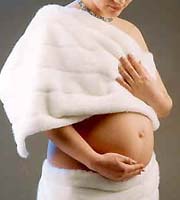 Users are distinguished from each other not only in coloreye, skin or increase, but also blood group and its Rh factor. For the time being, we sometimes do not care what kind of blood runs through our veins, as it "works" only on our organism and it is completely satisfied. But sometimes the situation may arise as a result of which the blood of one person is in contact with the blood of another - it is during her pregnancy or transfusion. And then there are problems ...

There are four major blood groups: First, it is still referred to as a zero (0); the second (A); the third (B) and fourth (AB). If pour human blood not his team, can develop serious complications, up to life-threatening conditions.

In addition, blood is divided into two types according toRh factor - a protein contained in red blood cells (red blood cells). Rh factor is positive or negative. If a woman with Rh-negative blood bears a child, inherited the father's Rh-positive blood, the mother's contact with the blood and the body of the fetus of a pregnant fetus perceives as something alien and produces antibodies that contribute to its rejection. This may hinder the normal growth and development of the unborn baby, have a detrimental effect on his health. When there is severe intrauterine fetal death, miscarriage at various stages of pregnancy.

During the first pregnancy conflict causedblood incompatibility between mother and fetus blood group and Rh factor, is rare, since the antibodies are produced by women is still in short supply. With each subsequent pregnancy, the likelihood of complications increases in several times.

Often, antibodies are formed and nulliparous women -as a result of previous blood transfusions, without taking into account Rhesus-compatibility, spontaneous or induced abortion, ectopic pregnancy. Compounding the severity of the condition and increase the likelihood of conflict, various complications during pregnancy (toxicosis, high blood pressure, infections and other diseases).

The conflict caused by incompatibilityblood group, is more common, but the ABO conflict serious problems occur less frequently than with the incompatibility of Rh-factor. Predicting the likelihood of pathological process can be, knowing Rhesus group affiliation and the blood of both parents.

Women who are at risk ofconflict during pregnancy should remain under the close supervision of an obstetrician-gynecologist. Throughout the whole period necessary to determine the level of Rh antibodies in the blood (1 time per month to 32 weeks of pregnancy, 2 times a month from 32 to 35 weeks and then weekly). The height of the antibody titre helps to determine the status of the fetus, the newborn to predict the severity of the condition and, if necessary, to prevent the development of complications.

To avoid conflict during the rePregnancy in women with Rh negative can be achieved by the injection of anti-Rh immunoglobulin immediately after the first birth, abortion, transfusion of incompatible blood. This is usually included in the routine practice of maternity hospitals, but when choosing the institution where you are going to give birth, it is better to ask such a question.