Home>Diseases of the ear, nose and throat (ENT)>All of Meniere's disease

All of Meniere's disease

This disease is the exact group of symptoms, found in 1861.
French physician Prosper Meniere. Symptoms of the disease are marked
Meniere so precisely that even after a century found
little new data associated with signs sluhovestibulyarnyh disorders.


The main symptoms of Meniere's disease:

Vertigo begins suddenly, in an absolutely healthy person, and
This may occur when nausea and vomiting. Typically, dizziness
accompanied by the noise in an unhealthy ear, a feeling of fullness
and hearing loss. As an independent symptom of the disease there is a sharp
nystagmus, but when the state completes an attack normalizes.
Dizziness manifested balance deviation, sometimes very strong, and
the patient tries to stand up, closing his eyes at the same time. If the patient is trying to
change the position, his health broken and acute nausea and
vomiting.

Symptoms can occur at different times of day, but usually at night or
morning. The caller factor is too much physical or mental
load. Sometimes, the patient feels the onset of symptoms
some time before, perhaps a few days. As a rule, the sign
attack appears sound in the ears or worsening slight deviation
balance. Possible unequal frequency of symptoms.

Often patients observed landmark syndrome: a sequence
frequent seizures with a state of complete health. During the period of more than
one week stage amplification is detected frequent occurrence
symptoms, and in the intervals between them a feeling of nausea and vomiting
reduced, it is not lost. During remission, which can last for about
year, normalized state of health and the patient is able to work. But with
time, the emergence of the symptoms are severe, and the patient
feelings of depression and imbalance even during remission. 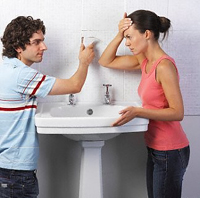 hearing loss typically occurs on one ear. Bilateral reduction
hearing to Meniere's disease is not typical. People suffering from this
disease often notice that hearing is getting worse, then again
improving. Such fluctuations last for as long as the hearing will not be
very poor. Complete deafness in Meniere's disease is extremely rare, but
sided deafness can develop.

Before the aggravation of Meniere's disease appears tinnitus, which
reaches its climax during an exacerbation, and decreases or disappears
immediately after the attack.

Regarding dizziness, they often lead to the fact that the patient
impaired balance and there are problems with walking. at
dizziness even sitting can be difficult. Vertigo's disease
Ménière's often accompanied by nausea, vomiting, increased
sweating, pallor, and changes in blood pressure.

Dizziness can occur several times a week, and
several times a year or even several years. Attacks of dizziness when
Meniere's disease lasts an average of a few hours, but it happens that
dizziness persists for several days. after this
attack within 1-2 days in patients with marked weakness that with
time passes, but reappears after a vertigo attack.
During an attack the patient should lie in a position in which
dizziness is less pronounced.

Meniere's disease is diagnosed mainly on the subjective complaints
patient. The main symptoms of Meniere's disease are dizziness,
tinnitus, hearing loss. Next, the doctor (usually hearing care professional)
carried out special tests on the amount of endolymph in the inner ear.
If its amount is more than the norm, it speaks about Meniere's disease. For
choosing the optimal treatment of the patient is most often directed to the full
inspection body as Meniere's disease is often accompanied by
other pathologies that need to be taken into account in the appointment of the course
therapy. For this purpose, the patient should be examined by a cardiologist,
neurologist and other specialists.

In the treatment of Meniere's disease physician must first reduce
the amount of the endolymph in the inner ear, in connection with which the patient is sometimes
appointed diuretics. With strong and frequent dizziness,
sedatives prescribed to the patient to reduce the unpleasant
sensations. If Meniere's disease running, it is recommended
surgical intervention.

Meniere's disease often occurs against a background of other diseases, such as influenza or acute respiratory disease. So before you treat Meniere's disease, it is necessary to cure the underlying disease that caused the hearing loss.

In Meniere's disease, in addition to medical treatment, it plays an important role proper nutrition, which is aimed at reducing the volume of fluid in the patient's body. With this diet
it is recommended to use as little salt as possible and finished products,
eliminate alcohol, caffeine, nicotine, moderately consume liquids.