Noise as a threat to health

Transport or production noise acts oppressingly on a person - tires, annoying, prevents focusing. As soon as such a noise is grumbling, a person is experiencing a feeling of relief and peace. What is noise from the point of view of science and how it acts on the body?


Noise - the same slow killer as chemical poisoning. The first noise complaints that have come to us can be found in the Roman satirika juvenla (60-127.). 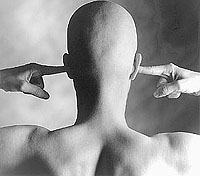 Modern noise discomfort causes painful reactions in living organisms. Noise from the fluttering jet aircraft, for example, in oppressively acts on the bee, it loses the ability to navigate. The same noise kills the larvae bees, breaks openly lying eggs of birds in the nest. Transport or production noise acts oppressingly on a person - tires, annoying, prevents focusing. As soon as such a noise is grumbling, a person is experiencing a feeling of relief and peace.

Noise level in 20-30 decibels (dB) is almost harmless to humans. This is a natural noise background, without which human life is impossible. For «Loud sounds» permissible border approximately 80 decibels sound in 130 decibel already causes a pain of a painful feeling, and in 150 - it becomes intolerable for him. The sound in 180 decibels causes metal fatigue, and at 190, the ripples are broken from the designs. No wonder in the Middle Ages there was an execution «under the bellol». The ringing of the bell slowly killed a man.

Any noise of sufficient intensity and duration can lead to varying degrees of decrease in hearing activity.

In addition to the frequency and level of noise, the development of hearing loss is influenced by age, hearing sensitivity, duration, nature of noise action, a number of other reasons. The disease is developing gradually, so it is especially important to adopt the corresponding measures to protect against noise in advance. Under the influence of strong noise, especially high-frequency, irreversible changes occur in the organ of hearing. With high noise levels, the decrease in the auditory sensitivity occurs after 1-2 years of work, with mean levels it is detected much later, after 5-10 years.

How we lose a hearing

The sequence with which the loss of hearing is happening is now well studied. First, intense noise causes a temporary hearing loss. In normal conditions every other day or two rumors restores. But if the impact of noise continues for months or, as it takes place in industry, years, the restoration does not occur, and the temporary shift of the threshold of hearingness turns into a permanent.

At first, damage to the nerves affects the perception of the high-frequency range of sound oscillations (4 thousand. Hertz or higher), gradually spreading to lower frequencies. High sounds «F» and «with» become furious.

Nervous cells of the inner ear are so damaged that atrophy, dying, not restored.

Noisy music also dults hearing. A group of specialists examined the youth, often listening to fashionable modern music. In 20 percent of the young men and girls, the rumor turned out to be dull to such an extent as 85-year-old old people.

The noise prevents the normal rest and restore forces, breaks sleep. Systematic lack of sleep and insomnia lead to severe nervous disorders. Therefore, sleep protection is «Balzam Soul» - from all kinds of irritants should be paid to much attention.

Noise has a harmful effect on visual and vestibular analyzers, reduces the stability of clear vision and reflex activity. The noise contributes to an increase in the number of all sorts of diseases is also because he oppressively acts on the psyche, contributes to significant spending of nervous energy, causes spiritual not satisfaction and protest.

Studies have shown that both unshaw sounds are also dangerous. Ultrasound, occupying a noticeable place in the range of production noise, adversely affects the body, although his ear does not perceive. Passengers of the aircraft often feel the state of malaise and anxiety, one of the reasons for which infrasucke. Infrasounds cause in some people seasons.

Even weak infrasounds can have a significant impact on humans if they are long. Some nervous diseases peculiar to residents of industrial cities are called precisely infrasounds, penetrating through the worst walls.