Quite rare pathology outdoorear. When the pinna microtia small, deformed and displaced generally forward and down. microtia treatment alongside cosmetic correction includes correction of any hearing impairment.

The concept of microtia

Microtia relatively rare pathologyear. When microtia ear changed to a greater extent - the pinna may be absent or have a small size and be deformed, and even simply consist of multiple skin folds. It is often biased, normally forwards and downwards. Such a significant anomaly is always combined with atresia of the external auditory canal.

It is important to remember that the outer, middle and innerear differ in localization and timing of embryonic bookmarks. Therefore, their anomalies can be very different, and in the absence of the pinna and ear canal changes the structure of the middle ear are often small, and the inner ear normally. On the other hand, in children with congenital anomalies of middle and inner ear outer ear may be little changed or fine. Anomalies can be one- or two-sided and combined with other congenital anomalies. Anomalies can be hereditary, caused by viruses or toxic influence of drugs in the early stages of pregnancy. However, often the cause of the anomaly remains unknown.

The main manifestation of microtia 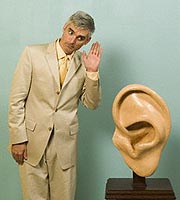 On the basis of the external manifestations are four types of microtia:

Marked variability explained by the defectdifferent mechanisms of occurrence. The syndrome of the first gill arch (occurs during fetal development) is not only the front part of the ear, while the 2/3 rear retained, although they can be deformed and reduced in size. The defeat is usually unilateral, more often on the right. Often found preauricular papilloma. At the same time there are unilateral hypoplasia of the lower and upper jaw, soft tissues, hypoplasia of the facial muscles.

When abnormality of the 1st and 2nd main gill archessigns the same as defined above. However, in all cases, the pinna and external auditory canal is almost absent. Can only be the rudiments of the lobe or skin and cartilage cushion. Detected preauricular appendages and fistula. Almost all patients determined hearing loss even if unchanged ear canal. Deafness caused while secondary pathology, and in some cases, and the inner ear.

Prenatal diagnosis is possible in some cases, using an ultrasonic diagnostic methods blemish in late pregnancy.

Treatment of auricular anomalies includes, amongcosmetic correction, diagnosis and correction of any hearing impairment. If a bilateral lesion, and the inner ear normally, develop conductive hearing loss up to 60 dB. Reconstructive surgery on the external auditory canal and middle ear - a difficult task, not always successfully solved, and long-term effects of the rapid restoration of hearing are often disappointing. Formed ear canal often biased and even closed, it would be preferable hearing aids transmit sound through bone. Their fixed pas hair or titanium screw - directly to the temporal bone.

Surgical correction of cosmetic defectsIt is generally carried out not earlier than achieving school age. Possible reconstruction using rib cartilage and skin grafts or installing ear prosthesis, which also can be attached to the head using titanium screws.